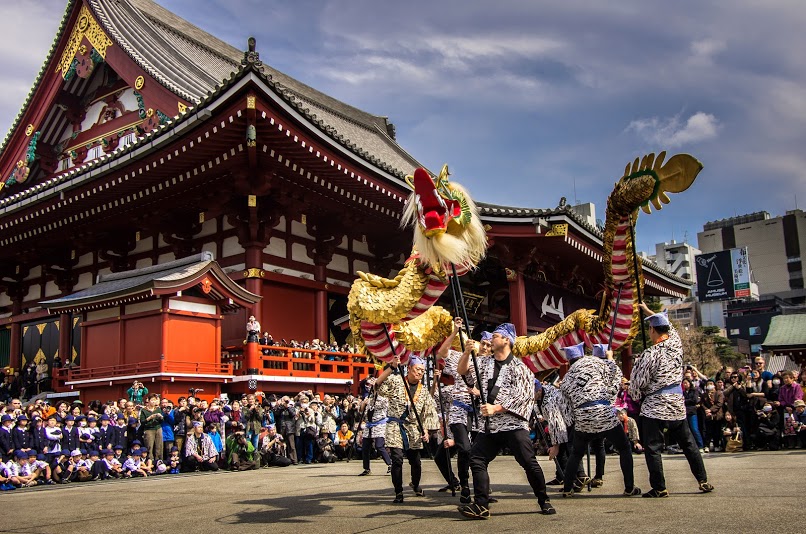 Like almost everything in Tokyo, Asakusa’s Sensoji Temple isn’t really that old; it might have been founded in the mid-7th century, but the temple standing today was actually built in 1958. To commemorate its rebuilding, the temple authorities started an event that became a tradition and continues until today: it is the Golden Dragon Dance or “Kinryu no mai”. And if you happen to be in Asakusa on March 18th, you’ll have a chance to see it first hand. (If you miss this chance, the next opportunity comes on October 18th—the dates are fixed regardless of the day of the week.)

Why a golden dragon? All Buddhist temples have an official name and it is always “something-mountain” (for the history otaku among us, this is because back in time they were mostly built on actual mountains). Sensoji’s name is “Kinryu-zan” or “Golden Dragon Mountain” and this is where the dancing serpent comes from. The story of the dance is that one night, when the temple was founded, Kannon (the deity worshiped in it) took the form of a golden dragon, swooped from the skies and in one night created a forest of one thousand pines (standing for abundance, prosperity and longevity) .

The dragon itself is an enormous marionette (18 meters/60 feet in length and weighing 88 kilos/194 pounds operated by 8 people; important part of the dance is a ninth dancer who is holding a lotus flower symbolizing the Buddhist teachings that the dragon seemingly attacks but actually wants to protect—considering how hard it is to manipulate this beast, the agility of the dancers) who aren’t actual dancers but just members of the Asakusa community) is actually quite remarkable.

Depending on the year, the event is held either two or three times the same day; it’s best to be at Sensoji early (i.e. before 12:00 due to crowds)—usually the dance is performed at 13:00 and 14:00. Regardless of the exact hours, the parade starts from Denpoin Temple’s kindergarten in Nakamise Dori (the street with all the souvenir shops) it goes down Nakamise, makes a stop at the Kaminarimon Gate and then again up Nakamise and to the open space in front of the Goju no To (five-storied pagoda), at the left of Sensoji’s main building.

If you catch the parade really early you’ll also have the chance to see a cart with geisha playing music and a group of very young children from Denpoin’s kindergarten holding pine branches symbolizing the 1000 pines the dragon/Kannon created that fabled night. The geisha will also sing the praises of Kannon in the beginning of the dance and in the end they’ll hang around allowing you to take pictures of/with them.

If you feel like getting a rare souvenir (hey, you haven’t paid anything for the entertainment so far!) you can fork a 1,000 yen note for one of the tenugui hand towels the geisha sell: you can only buy this there and on that day.

If you don’t mind spending the whole day in Asakusa, here’s a tip you won’t find anywhere else: Golden Dragon Dance is held on March 18th because this is the day Sensoji was essentially founded (two fishermen found a statue of Kannon in the Sumida River, took it to the village and one of the village elders made the temple to honor it—the village was, of course, Asakusa). The three men are enshrined in the Asakusa Jinja, the shrine to the right of Sensoji and Asakusa’s big festival, Sanja Matsuri, is held every May to honor them. On March 18 though, early in the morning, the three o-mikoshi (portable shrines) symbolizing the three are taken out of their storage, taken to Sensoji, get a blessing and then get paraded back to the shrine. Besides the matsuri (festival), this is the only time of the year these huge shrines are taken out. And if you get to Sensoji early (i.e. around 08:00-09:00) you can see them from up close. You heard it on Tokyo Cheapo first!

Take the Ginza or Asakusa Line and get off Asakusa Station. The Golden Dragon dance is extremely popular so expect a huge crowd; if you want to take good pictures, go early or find a good spot near the pagoda and wait for the dragon to come to you. And after the dance, go touch it for good luck—everybody does!

Wondering what else there is to do in Asakusa? Here are some free and cheap ideas.

Open with Maps
Sensoji
Asakusa
Written by: Grigoris Miliaresis
Filed under: Events | Things to do
Tags:
Sharing
Questions or comments about this article?
Start a thread on our community forum
Ask our local experts about Tokyo