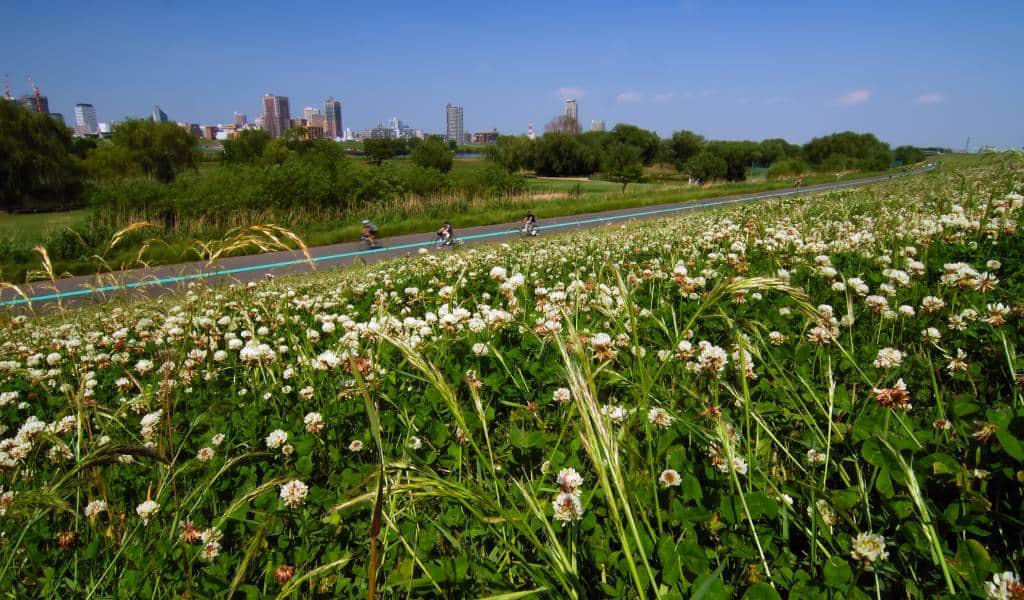 Tokyo by Bike: 5 of the City’s Best Cycling Routes

With so much to see and do jam-packed into one sprawling map, getting around Tokyo by bicycle is actually one of the best ways to get to know the city on a more intimate level. Exploring the city via these popular cycling routes will open your eyes to the openness, nature, and peacefulness of Tokyo, plus you’ll be keeping healthy and avoiding the crowded trains, so wins all-round. Plus, it’s pretty easy and accessible to rent a bike in Tokyo, either from a store or share bike platform. If you’re really keen, you can invest in a used or new set of wheels.

We’ve discussed this scenic cycling route in depth before, but it’s well worth highlighting again. Clocking in at around 20 kilometers, it’s an excellent half-day adventure, or full day if you’d like to take it easy, and an ideal way to explore the different sides of the city while following one of Tokyo’s most iconic rivers. It’s not an official ‘cycling’ route, but the Kanda River is mainly flanked by a pathway making it very cycle-friendly.

The route starts at Kichijoji’s Inokashira Park and travels through the neighborhoods of Suginami, Nakano, Shinjuku, and Bunkyo, before connecting with the larger Sumida River near Ryogoku Bridge in the Taito Ward. Alternatively, you could start in Nakano and wrap the journey up in Kichijoji’s Inokashira Park. What makes this journey particularly notable is that it showcases some of the city’s most lush and hidden green spaces. It’s lined by verdant green trees that overhang the Kanda River, and it also hits the city’s more modern and iconic corners like Shinjuku while offering a glimpse of suburban inner-city bliss as it cuts through Suganami and Nakano. It’s perfect for a little taste of everything.

If you’re looking for a very short route, maybe something that’s ideal for families and super casual cyclists, head to Wakasu Seaside Park in Tokyo’s Odaiba area. The cycling path itself is about 6 kilometers long, meaning it can be comfortably ridden in about 40 minutes or so from end to end. What makes it worth mentioning is that Wakasu Seaside Park also has a cycle center, where you can rent bikes; the per-hour rate is ¥100 for adults and ¥50 for children.

Although more serious cyclists may not be fully satisfied with what Wakasu Seaside Park offers, casual riders and traveling guests will appreciate the convenience. Still, the area is full of unique bayside Tokyo views, making it an excellent way to explore this unique side of the city.

As its name suggests, this route travels along Tokyo’s Arakawa River, which runs from Tokyo Bay down south to Saitama’s Chichibu area in the north. In total, the river runs about 173 kilometers, which in cycling terms is more than the entire Shimanami Kaido (about two and a half times), but it does mean that it offers plenty of choices in terms of where to start and finish.

This cycling route is about 80 kilometers, which is still not small but quite doable in a day if you’re fit and focused. The route cuts predominantly through the east side of the city before heading north to Saitama. Along the way, you’ll find plenty of restaurants and cafes to explore, as well as parks to take a little rest, one highlight being Sakura-Tsutsumi Park, which is beautiful year round but especially in spring when the park’s cherry blossoms are in full bloom.

One of the best things about exploring Tokyo’s cycling routes is just how flexible and customizable they are, and this route is no exception. Technically the route runs from Saitama to Chiba Prefecture, clocking in at around 64 kilometers. However, if you want to kick off the route in Tokyo or make the journey a little shorter, a popular route is cycling from Mizumoto Park in Katsushika City to the old-world downtown neighborhood of Shibamata.

Shibamata is rich with Showa-era charm and home to the Shibamata Taishakuten Temple and Katsushika Shibamata Tora-san Museum.

Another little bonus with this route is that it’s well set up for visiting guests, as there are several locations near and along the way that rent out bikes, including the Tora-san Museum (¥400 for high school aged students and older, ¥200 for junior high school students and younger). Also, Edogawa City has rental cycles at the bicycle parking areas near 11 train stations, the key ones being Kasai, Nishi-kasai, Kasai-Rinkai Park, and Koiwa.

The Sumida River (aka Sumidagawa) is one of the city’s main waterways, cutting throughout Tokyo like a major artery and passing by plenty of attractions and iconic neighborhoods. You can practically start and finish anywhere you’d like on the map, depending on what you want to see and how far you want to go.

We’d suggest starting the journey in Ryogoku, the sumo capital of Tokyo, then heading north past Tokyo Skytree and Sensoji Temple. This route also offers easy access to Tsukiji (which is great for lunch). If you’re feeling adventurous, you could even cycle all the way north to where Sumida meets with Arakawa and take the Arakawa way back to the center of the city.

Written by: Lucy Dayman
Filed under: Getting around | Sporting Activities
Tags:
Sharing
Questions or comments about this article?
Start a thread on our community forum
Ask our local experts about Tokyo