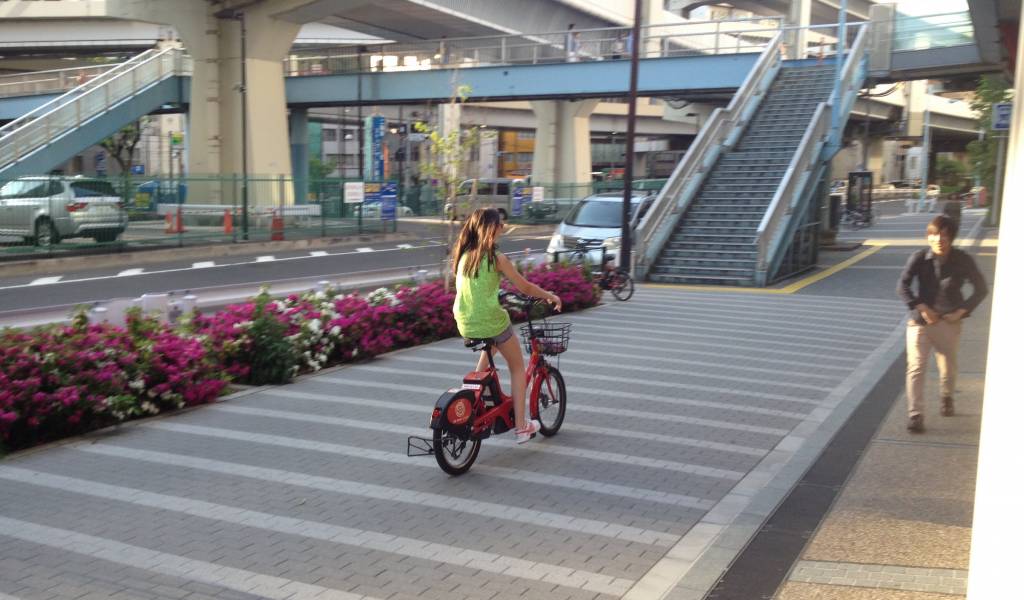 With its high population density and scarcity of space, Tokyo was made for the sharing economy. As such, it’s no surprise that bicycle sharing has taken off—despite being dominated by Docomo with its difficult-to-use system of sometimes-functioning bikes.

Pro tip: Check out our review of Hello Cycling as an alternative bike rental option in Tokyo.

What exactly is bicycle sharing?

To encourage people out of their cars and to provide a healthy alternative to jumping in a taxi, various cities around the world provide a pool of bikes for communal use. Typically, there are stations or hubs dotted around a city with multiple bikes in docks. Members use a card or smartphone app to check the bike out. You usually have the option to return the bike to any station on the network or just leave them in a random location for someone else to pick up.

Looking to buy a bike instead? Check out our guide on where to get secondhand bikes in Tokyo.

How do I use Docomo bike sharing?

Docomo Bike Share currently operates in 10 wards of Tokyo and in many cities throughout the rest of Japan. All of the bikes are electric-assist bikes. If you switch on the assist function, it will make pedalling easier, which helps on Tokyo’s many inclines.

Unless you are planning on getting a one-day pass, to check out the bikes, you first need to sign up on the website or install their app for iOS or Android (see the plan options below). Sign-up requires a credit card, so make sure you have that handy. The app might reject credit cards from outside Japan. For a short time, they actually had two different apps which they have since merged. Both are universally disliked with a rating of 2.4 stars for the iOS app and 2.3 stars for the Android app. That being said, the new app is a big improvement over the old one.

Locking a bike but not returning it

If you want to park your bike and not give it up, you can just lock it and leave it anywhere. While the bike is locked and not returned, you’re still paying for it (see fees below).

Returning the bike requires just one additional step to locking.

Using an IC card as a key

Entering the PIN each time can be a real drag—especially as the control units are so wonky with barely functioning buttons. Therefore, it’s much easier to use an IC card (such as a SUICA or Pasmo) to unlock the bike. The first time that you borrow a bike and when entering the PIN, the control unit will give you the option to register your card. You do this by resting the card on the card reader area. This may be a little confusing, since you probably use this card for paying for travel and buying things at the convenience store. However, when you use it as a key, it doesn’t take any money from your card balance. It’s just a unique identifier tied to your account.

Another advantage of using an IC card as a key is that you can grab a bike any time without reserving a bike on the app. If the bike hasn’t already been reserved, you can just tap your card on the control unit and ride off on the bike.

As mentioned previously, you can pick up and drop off bikes at docking stations in 10 Tokyo wards. These wards are Bunkyo, Chiyoda, Chuo, Koto, Meguro, Minato, Shibuya, Shinagawa, Shinjuku and Ota. Nerima ward also offers Docomo cycle sharing, but it is surrounded by wards that aren’t part of the Docomo system, so you can’t return a bike from one of the main 10 wards or pick one up in Nerima and drop it off elsewhere.

The following wards do not have docking stations, despite being home to several of the city’s popular attractions:

Of course you can still ride the bikes into the above-mentioned wards, but you’ll have to return to one of the 10 wards to drop the bike off.

Additionally, the same membership can be used to borrow bikes in Kawasaki, Yokohama, Sendai, Hiroshima, Nara, Nagoya, Onomichi, Osaka, Kobe, Oita, and Okinawa, as well as a few smaller towns and villages. Confusingly, each cycle sharing service has a different name and different website. For example, in Chiyoda ward, it’s called “Chiyokuru”, while in Hiroshima it’s known as “Peace-kuru”. However, once you’re signed up through one service, you can use any of the others.

Take note that only the 10 central wards of Tokyo allow for pick up and drop off in the other coverage areas. If you were planning an epic cross country cycling odyssey from Tokyo to Osaka, you won’t be able to drop off your bike when you get there.

The monthly plan makes sense if you plan to use the bike about three times per week. If your usage is below that, then the pay-as-you-go plan with no monthly fees makes much more sense. Even the one-day pass when compared to the pay-as-you-go plan requires you to use the bike for 6.5 hours continuously before it provides more value. Of course, if you just want the security of having your own bike for the whole day then the one-day pass will be worth it. Additionally, the app and the website don’t make it easy to sign up as a tourist, so if you’re just visiting Tokyo, the one-day pass might be the best option.

All the fees in the table below (unlike the ones provided by Docomo) include consumption tax.

*If you buy from a staffed one-day pass seller, they will also charge you ¥500 for a card with an IC chip in it (similar to SUICA or Pasmo) to unlock the bike.

Where to buy one-day passes

While the pay-as-you-go and monthly plans are available through the app, one-day passes can be purchased in convenience stores, at vending machines next to large ports, and also at staffed locations (usually hotels or Docomo shops).

You can buy the passes at either FamilyMart or 7-Eleven convenience stores. Unfortunately, it’s not as easy as just asking for a pass. You have to create a ticket order using the Fami-port terminal at FamilyMart or 7-ticket function on the multicopy machine at 7-Eleven. You will need someone who can read Japanese for this. If the convenience store clerks are feeling kind, they may help you.

Staffed vending points and automatic vending machines are much rarer than convenience stores, but if you don’t speak and read Japanese, they will be much easier to deal with. You can find these locations in the app (again in Japanese…*sigh*), but some relatively easy-to-find locations include:

While Docomo Cycle is a useful service, it gets a lot of things wrong. Here are some of the problems.

Although the bikes have electric assist, they are big and bulky. The rules for use state that the rider needs to be at least 140 cm tall. I’d suggest a child of around that height still might struggle with the bike when they come to a stop. If you’re considering renting a bike with the family, you’ll be out of luck if the smallest member is under 140 cm.

Also, you should never make important time-bound plans that rely on Docomo share cycles. The availablity and unreliability of the bikes means that you quite often can’t get a bike when you need one.