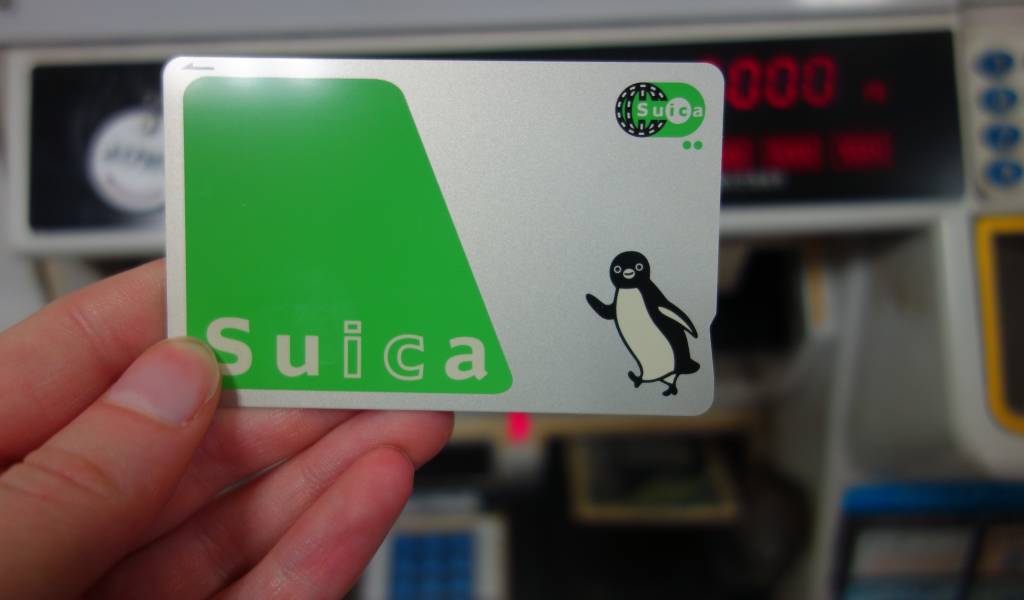 Suica Cards: Quick Guide to What, How, Where and Why

Forget fussing with paper tickets, small change, or mental maths: pick up a Suica card as soon as you touch down at Haneda or Narita and sail off confidently into the Tokyo public transport network.

What is a Suica card?

The short answer is: the universe’s gift to travelers in Japan. This contactless IC card, issued by JR (Japan Railway) East, is a pay-as-you-go pass for a whole host of Japanese train lines, as well as subways, bus lines and streetcars, vending machines, some convenience stores, and station-area facilities like coin lockers. Suica cards are cheap, easy, flexible and available for purchase online, with options to collect it at the airport or have it shipped to you at home. You can also, obviously, get them at train stations.

The Welcome Suica Card: Specifically for short-term visitors to Japan

In September, 2019, Suica introduced the Welcome Suica, a sakura-themed card which is perfect for (some) visitors. The card has no deposit, which is great, but it automatically expires after 28 days, so it’s only intended for those staying for a few weeks. The card is available with a variety of pre-loaded amounts—from ¥1,000 to ¥10,000—and you don’t have to go to the trouble of returning the card or sacrificing the ¥500 return fee. You can purchase the Welcome Suica card at JR East Travel Service Centers at Narita Airport Terminal 1 Station, Narita Airport Terminal 2/3 Station, Haneda Airport International Terminal Station, Tokyo Station, Shinjuku Station, Ikebukuro Station, Ueno Station, and Hamamatsucho Station.

Where do these magical Suica cards work?

Pretty much everywhere: on all JR East train and bus lines, as well as on lines owned by other Japanese rail companies. There’s a fair bit of interoperability, meaning that your Suica card will get you around Tokyo with no bother because it’s fully compatible with the Tokyo metro area’s Pasmo system. It also works on the Tokyo Monorail to Haneda Airport, but not necessarily with other airport shuttles.

Suica cards also work perfectly well in many other parts of Japan. They can be used on a whole bunch of mass transit systems outside Tokyo, such as Kyoto, Sendai and Niigata, as well as areas serviced by other IC travel card systems, including:

– ICOCA, run by JR West
– Kitaca, run JR Hokkaido
– TOICA, run by JR Central
– PiTaPa, used in the Kansai region, and some parts of Okayama, Hiroshima, and Shizuoka
– manaca, used in Nagoya and surrounds
– SUGOCA, run by JR Kyushu
– nimoca, used by Nishitetsu (Nishi-Nippon), and others in the Fukuoka region
– Hayakaken, used by the Fukuoka City Subway

tl;dr: If the card name has an “a” on the end, chances are it’s part of the Suica family.

If you do find yourself somewhere that a Suica card doesn’t get you through the automatic ticket gate, simply make your way to the staffed gate, show them your card and say where you boarded the train. They should have you sorted out in a jiffy.

Can I use my Suica card on the Shinkansen?

While, in theory, IC cards work on some Shinkansen, it’s pretty much standard practice to buy a dedicated ticket when using the bullet train in Japan. For short-term visitors doing more than one domestic jaunt, a JR Pass is the way to go, while discount tickets are often available for single trips. A rule of thumb is: if it’s a special/fancy/super-fast train covering large distances, it needs its own ticket, while day-to-day transport in and around the city can be navigated with a Suica or similar card.

Where can I buy a Suica card?

You can buy a prepaid Suica card at Haneda or Narita, as well as from JR East ticket machines at train stations—just look for the machines displaying the Suica symbol. You can also buy them at JR East Travel Service Centers. It’ll set you back a relatively modest ¥2,000, with ¥500 of that being the deposit and ¥1,500 being the amount that’ll initially be available to you for fare. The issuing machines, which you can find pretty much everywhere, do have English support, and the instructions are easy to follow.

Pro tip: If you are the sort (like us) who likes to have everything organized before arriving, you can also buy a Suica card online and pick it up at the airport, or even have it shipped internationally, though you’ll pay a teensy bit extra for the convenience.

How to register a Suica card

You can register your Suica card at the time of purchase by selecting “MySuica” and inputting the information requested—your name, DOB, gender and phone number. Why would you do this? If you’re going to be in Tokyo for a while and want to use it as a commuter pass, or if you’re worried you might lose your card and all the money on it, registering it means that you stand a better chance of getting it back (because your name will be on it), and if you don’t get it back, you can have your remaining balance transferred to your new one. However, there’s a fee for this and you’ll have to put down another deposit, so if you’re just here on holiday, consider whether you really want to bother.

How to charge a Suica card

Machines are available on both sides of the gate at every JR East station. Regular ticket machines are outside the gates, and fare adjustment machines are inside. Select “English” on the machine (usually on the top right), hit charge, select your amount, insert your money, and you’re good to go. Easy peasy, lemon squeezy. One drawback is that you can only use yen to recharge—your credit card cannot be used. The maximum charge amount is ¥20,000.

Children’s Suica cards are available, but there isn’t a lot of information about them online in English. They’re also not quite as widely accessible as adult Suica cards. A child fare for the trains and metro is half that of an adult, and the fare applies to persons age six to 11. You can purchase a children’s Suica at most major Japan Railways service centers (not vending machines), including the JR ticket office at Narita Airport. To get a child’s Suica, you will need to have proof of age, so bring your child’s passport.

Pro tip: In Japan, children under six can generally travel on the trains for free, as long as there are only two of them—the third child under six will be charged a child’s fare. When passing through the ticket gates, simply scan your own pass and walk through together. While the odds of being asked are low, it is worth carrying a proof of age document—like a passport—to avoid any awkward conversations with the train and metro staff.

How do I return a Suica card?

If you don’t feel like taking it with you as a souvenir, you can return your Suica IC card at the end of your trip and get your deposit back. There is a fee for this: ¥220, which will be deducted from the remaining balance on your card. Your deposit of ¥500 is exempt from this, though, so you’ll always get that back. Obviously, you can’t deduct ¥220 from a card with less than ¥220 on it, so try to return your card with as little as possible left on it.

Note: If you purchased your Suica from Tokyo Monorail, it can only be returned to them, not JR.

A virtual substitute for the Suica card is available on some smartphone devices—this is known as Mobile Suica. Instead of using a physical card, with Mobile Suica, you can pay for your transport (and other things) by swiping your phone as you would a regular Suica card. The device doesn’t need to be connected to a network, nor unlocked, to work. It does need to be on, though.

Who can use Mobile Suica cards?

On Apple devices, the Mobile Suica system is available for the iPhone 8 and up, and Apple Watch Series 3 and later (if the device was bought outside of Japan). It also works on iPhone 7s that were purchased in Japan (and all new models after that). Anything released earlier is not compatible.

Android users can access Mobile Suica via Google Pay. However, they must have an Osaifu-Keitai eligible phone, which essentially means a smartphone purchased in Japan.

Setting up a virtual (mobile) Suica card in Japan

To set up a virtual Suica on your iPhone, you must set your device region to Japan. To activate the card, open the Wallet app and select the Suica profile. If you previously had a real Suica, you can add the remaining amount on that card to your virtual wallet by following the prompts and adding the last few digits of the card. Or you can create a new Suica card on your iPhone. You can choose to pay via Apple Pay or direct from your credit card; the costs are the same, so this is just a matter of preference.

It’s worth noting that if you have an iPhone and Apple Watch, you cannot have the same Suica account on both devices. It is possible to switch between devices, though.

To use Suica on your phone, you need to add Suica to your Google Pay profile. Suica also has an app for Android users that allows you to buy commuter passes, Green Car tickets, and Shinkansen tickets. But it’s only available in Japanese at the moment, and the reviews on Google Play aren’t great.

Note: The Mobile Suica only works when your device is on. If your battery dies while you’re on the train, inform the staff at your exit gate; they will give you a slip with fare details on it. The next time you arrive at a station, show the staff the ticket you were given to pay what you owe and to allow your Suica to get you through the ticket gate.

For more information on IC cards in Japan, see our handy Suica and Pasmo comparison guide. You can also check the official JR East site.

While we do our best to make sure it’s correct, information is subject to change. This post was a joint effort with Lily Crossley-Baxter. Last updated: January, 2020.

Written by: Kylie Van Zyl
Filed under: Getting around | Transport
Tags:
Sharing
Questions or comments about this article?
Start a thread on our community forum
Ask our local experts about Tokyo