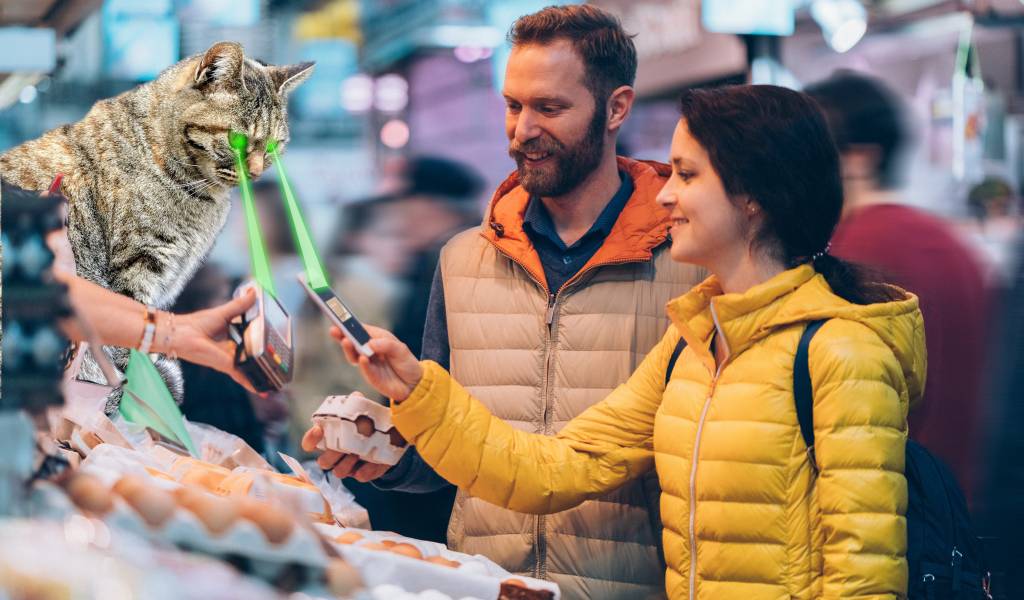 Contactless Payments and Apps in Japan

Contactless electronic payment systems (referred to as “cashless payments” in Japan) have mushroomed all around the globe in recent years. Ultra-modern Japan is, however, still lagging behind in some respects, but has made strides to catch up over the last few years. Here is an overview of the most common and useful contactless payment methods and cashless payment apps in Japan and how everything works.

Contactless payment refers to an electronic payment, covering everything from credit and debit card payments (not requiring a PIN or signature) to digital wallets, virtual cards, mobile payment apps, and IC card payments. While some systems use forms of NFC (near-field communication), others are QR code based.

You often get (small) discounts for paying without cash, and you may collect points for various reward schemes, too. Plus, contactless payment tends to be more hygienic—an important consideration these days.

Japan’s relationship with contactless payments is a bit different compared to other parts of the world. The big thing for years has been Pasmo and Suica transport cards (there are also many regional versions). Initially they were used only to tap onto public transport systems, but later accepted as a form of payment by more and more shops around Japan. Therefore, it is not surprising that the digital version of these transportation cards is one of the most popular electronic payment forms in Japan.

Using smartphone-based apps for payments has a few advantages. First, they’re often accepted at small stores that take cash but don’t accept credit cards. Second, they’re great if you can’t get a credit card—either because you’re a foreigner or you’re too young. However, as mentioned, one of the biggest benefits seems to be the points, which can be redeemed within the app ecosystem. For example, LINE points can be used for travel, stickers, or taxi rides.

One more bonus of using the apps over the IC card–based payment methods is that you can send money to and receive money from anyone else with the same app.

Widely accepted: Yes
English-language version: Yes (but with parts in Japanese)
Point system: Users can get a bonus if they top up the balance using any method other than credit card. Regular discounts or bonus campaigns are available depending on participating stores.
Where to download: Google Play or App Store

PayPay is a Softbank and Yahoo! Japan joint venture and received widespread adoption due to a very successful advertising awareness campaign. It currently offers generous discounts and reward bonuses but stipulates in its terms and conditions that these campaigns may be phased out in the future. It is accepted widely in stores throughout Tokyo, often in stores where credit card is not a payment option. The campaigns can offer good deals for cheapos that can read Japanese.

The QR-code-based system works in two different ways depending on the merchant. Merchants with the right equipment just scan the personalized code from the app on your mobile. For merchants that don’t have the gear, you scan their code, enter the payment amount, and show them the on-screen payment completion on your phone.

You can add to your PayPay balance by bank transfer, at the ATM, by connecting it to your SoftBank/Y!Mobile phone bill, with a gift card, by getting a friend to send you money, or with a credit card.

The bonus is recorded as a yen amount in the app. Users can use points in three ways. They can be used as an instant cash-back discount on each subsequent purchase, saved for later use, or interestingly, you can put them in a managed investment fund!

LINE Pay belongs to LINE, Japan’s biggest messaging service and super app. Security for LINE Pay transactions is highly rated, and the app is accepted in a variety of both online and brick-and-mortar stores. Once you download the app, you can add balance to your account via bank transfer or at convenience stores.

R Pay was a forerunner of cashless payment in Japan, but now its competitors are catching up to it. The service, connected to Rakuten (basically the eBay of Japan), is commonly found and has partnerships with many chain stores, including convenience stores. R Pay lets you earn Rakuten reward points, and if you also have a Rakuten credit card, your points will double.

As Rakuten is one of the few credit card providers in Japan that doesn’t have huge hurdles for foreigners, it is definitely worth a consideration in combination with the point system.

Widely accepted: Getting there
English-language version: No
Point system: No, but occasional campaigns
Where to download: Google Play or App Store

This digital payment service is for those that use the Japanese online marketplace Mercari. You can add to your Merpay account from either your bank account or your earnings from Mercari sales. Currently, Merpay has around 1 million partner stores in Japan; as Mercari is Japan’s dominant online marketplace with good brand awareness, this number can be expected to grow.

In 2020, Merpay bought out Origami—another up-and-coming payment app—and rolled it into Merpay.

Widely accepted: Not yet
English-language version: No, there is a basic English explanation on the website, but the app is in Japanese
Point system: Yes
Where to download: You will need to apply for membership on the Docomo website to install the app.

d Barai is connected to NTT Docomo, a Japanese mobile provider. You can use it to pay your monthly phone bills, then spend reward points online and offline. It isn’t very widespread yet and only available in Japanese, so it’s probably only worth considering for those with Docomo as their mobile provider.

Outside Japan, the universally used system for NFC-based contactless credit card payments is EMV (it stands for Eurocard, MasterCard, Visa). You’ll probably recognize the wifi-like symbol on your card and payment terminals. While EMV is gaining some traction in Japan, the overwhelming majority of contactless terminals and card companies support the Japan-only FeliCa chip.

This is the same chip used in the Suica and Pasmo transit cards and the basis for the two most common systems for contactless credit card payments in Japan: QUICPay and iD. When you sign up for a credit card or debit card, you can request that it come equipped with either QUICPay or iD. Depending on the provider, the functionality may come as part of the card, or they may issue a separate QUICPay or iD card connected to your other card. There really is no difference between the two as both are widely accepted. To add your Japanese credit card for cashless payment on Google Pay or Apple Pay, you’ll need either QUICPay or iD.

These usually come pre-installed on your smartphone of choice. Note that for Android phones, you need to have the FeliCa chip, which supports Osaifu-Keitai to add Japanese cards. Most non-Japanese Android handsets and “overseas model” phones purchased in Japan don’t come with the chip.

Unlike the payment apps or credit/debit card–based systems, the digital payment wallets don’t have points or rewards. You can store lots of payment methods (that have rewards) and loyalty programs in your digital wallet, though.

Apple Pay is a digital wallet to which you can securely add credit cards, transit passes, loyalty cards, and even event tickets. You can set a default payment method, or choose from your registered debit/credit cards at checkout. Rather than ask for Apple Pay at checkout, you should request the payment platform—so Suica/Pasmo, iD, or QUICPay.

Basically the same as Apple Pay, just for Android, this digital wallet can securely hold all your iD and QUICPay compatible credit/debit cards and loyalty cards. Google Pay supports Suica, as well as Rakuten Edy.

As mentioned, to use Japan-issued credit cards with Google Pay, you will need a FeliCa chip supporting Osaifu-Keitai in your phone.

Using contactless payment as a visitor to Japan

As a visitor, the QR Code-based apps above aren’t available to you unless you have a Japanese mobile number. At present, the only tourist SIM that comes with a local number for calls and SMS is Mobal. If you don’t have a local number, you still have a few options.

The good news is that EMV is becoming more widely accepted. The bad news is that it will still only be available at a very small number of merchants. Also, don’t be fooled if you spot something that looks like the EMV symbol on the terminal; it doesn’t mean that you can tap to pay with your foreign credit card. Instead, look for the contactless logo mark next to the credit card logo at the payment terminal. You’ll need to request the payment method before you put your card over the terminal. Even if you have a Mastercard, you’re probably best to request “Visa Touch”. If the merchant supports credit card, but not EMV based touch methods, you can still pay the old fashioned way—using a PIN or signature.

There are no restrictions on who can purchase a travel IC card. As a visitor, you can purchase them from the ticket vending machines at any station, load up to 20,000 yen, and get a refund on the balance when you leave. You can even load them into your iPhone wallet as long as you’re using an iPhone 8 or later—but sadly not your Google Pay wallet.

EMV-based payment (i.e., Apple Pay and Google Pay) is supported on more and more terminals. However, it can be hit and miss, and with the overwhelming popularity of the Japan-based FeliCa methods, sometimes a pain to explain to the person operating the register.

When paying with a foreign credit card through Apple Pay or Google Pay, you should request “Visa Touch”. You might get away with asking for “Master Touch”, but it’s less well known, so you might be better off asking for Visa Touch even if you have a MasterCard. Places where you can use your overseas cards with a non-Japanese handset include 7-Eleven, Lawson, FamilyMart, most big supermarket chains, Tully’s, McDonald’s, The Hub, Tokyu Hands, LAOX, and Kansai International Airport.

A more reliable method (with Apple Pay only) than hoping that the merchant has EMV support is to add your Suica or Pasmo transit card to your Apple wallet and use it as a payment method. You can even top it up directly using your payment methods from home. At payment, you should state that you are paying by Suica or Pasmo. Unfortunately this doesn’t work on EMV based Android handsets, because you can’t add your Pasmo or Suica to your wallet.

Cash is still King in Japan

Despite all the fancy schmancy apps, wallets and NFC magic, Japan is still very much a cash-based society. While more and more places are embracing the contactless/cashless future, you will come across many restaurants, cafes, local shops, gas stations, and even hotels that have “cash only” signs clearly displayed at the register. Restaurants especially, often except cash only for lunch, when they typically serve cheap, low-profit-margin meals. In Japan, currency is seen as real, immediate and safe—and free of the fees that the payment providers charge to the merchants. So while we urge you to try out the many contactless payment methods mentioned above, we recommend that you always carry some yen around with you.

While we do our best to ensure it’s correct, information is subject to change. This post as originall published on February 13, 2020. Last update: June 15, 2021.