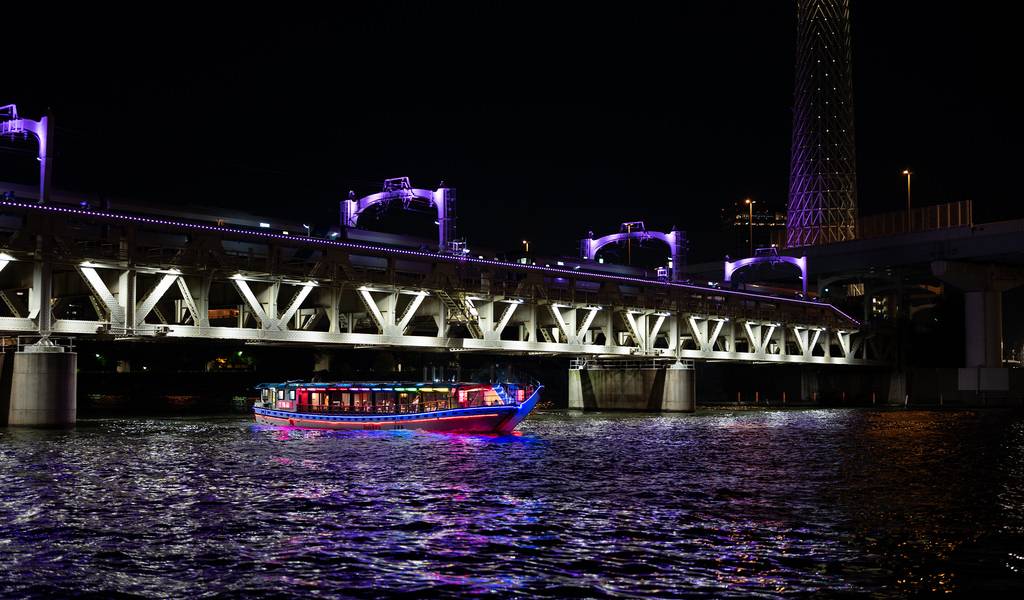 With its dense jungle of glass, steel and concrete, it’s easy to forget that Tokyo prospered upon its proximity to the sea and its many canals and waterways. For a unique view of the metropolis, there is no better way than to jump on one of the many boats that offer cruises of Tokyo Bay.

While a cruise during the day will give you a fascinating view of day-to-day life and the grimy reality of the many waterways, like the city itself Tokyo Bay comes to life after dark, when the light from a million windows and neon signs shines down on the water. The other obvious advantage of a Tokyo night cruise during the hot summer months is the refreshing breezes out on the water, and the constant flow of chilled beer and cocktails.

While there are ways to spends lots of money out on the water, there are also plenty of reasonable Tokyo night cruise options comparable to a night on dry land. Here are our top picks.

Ving Et Un is a mini cruise ship carrying up to 700 people that has been plying the waters of Tokyo Bay since 1998. As the name suggests, it has a French theme, with a variety of French cuisine if you want to spend some dough. You don’t need to splash out on a nine-course meal though; they also provide the option to just go along for the ride for ¥3,500 and to order drinks as you like.

The boat has three sailings each day. The first at 12 noon, the second at 4:20pm and the last at 7:20pm. Each sailing lasts for two hours.

The Noryosen is a largish, multi-level cruise ship that runs evening ‘Yukata Cruises’ on Tokyo Bay over summer. This is from July 1st until September 11th in 2022.

The cruise leaves from Takeshiba Pier near Hamamatsucho Station at 7:15pm, passing under Rainbow Bridge, continuing on past the lights of Odaiba, and doing a U-turn near Haneda Airport before heading back and docking at 9pm.

The cost of getting on the cruise is ¥1,500 which doesn’t include any food or drinks. If you wish to wear a yukata (light summer kimono) yourself, you’ll get a ¥500 discount on the ticket price—but only if you go on a weekday, as the discount doesn’t apply on weekends or on public holidays.

You have to book ahead—telephone bookings and website bookings are accepted up to a month in advance (starting June 1st). The website is only available in Japanese (there used to be an English site).

Another popular option for Tokyo night cruises (and day cruises too) is taking a ride around the bay on one of the Symphony cruise liners.

These boats run from lunchtime until late at night, giving you a wide range of different cruise and dining options to choose from. Most cruises are about 2-2.5 hours long, though there are hour-long versions for those who don’t have much time for seafaring. The Symphony cruises take you past all the major sights, including Tokyo Skytree and Tokyo Gate Bridge.

Yakatabune are the more traditional low-slung boats (so they can fit under the many low bridges on the Sumida River and connected canals) strung with red lanterns down both sides. In Tokyo, yakatabune tend to specialize in monja—a sloppy, savory type of pancake similar to its better-known West Japan cousin—okonomiyaki. There are, however, a huge range of different options—from kaiseki and tempura through to yaki-niku.

Many yakatabune offer a combined cruise, food course and all-you-can-drink package for around ¥10,000. However, you can sometimes get evening cruises for as low as ¥6,000. With the food on yakatabune, you more or less get what you pay for. The thing that doesn’t vary with price is the amazing view.

Most offer a dizzying array of different courses, different departure points and different minimum booking numbers, so it can be a little difficult to reserve. Some require you to book the whole boat—so it can work out reasonably cheaply if you convince about 75 of your friends to come along. A slightly easier and more convenient option is booking a spot on this dinner cruise with banquet and all you can drink.

This particular yakatabune (formerly known as the 4,900-yen yakatabune—before they put their prices up) was a lot easier to work out. Since we first wrote about them, they’ve changed their system a few times. While early evening cruises (departing at before 4pm) cost ¥5,000 for a single adult, early evening and weekend cruises are priced at ¥5,500 to ¥6,500. If you can handle daytime heat (these boats are typically open-sided with no aircon), afternoon cruises are good value.

A few daytime cruises depart from the relatively convenient Asashio Pier—located between Triton Square and Kachidoki Station. Most boats, however, depart from the much more inconvenient Shin-kiba Pier, which is a free shuttle ride from Shin-kiba Station—the last stop on the Tokyo Metro Yurakucho Line.

Don’t expect much from the food, and they might even serve you a beer can rather than a glass. However, you can’t beat this for some good-value boozy fun on the water.

Reservations can be made by telephone (only in Japanese!) for as few as two people. More info (in English) here.