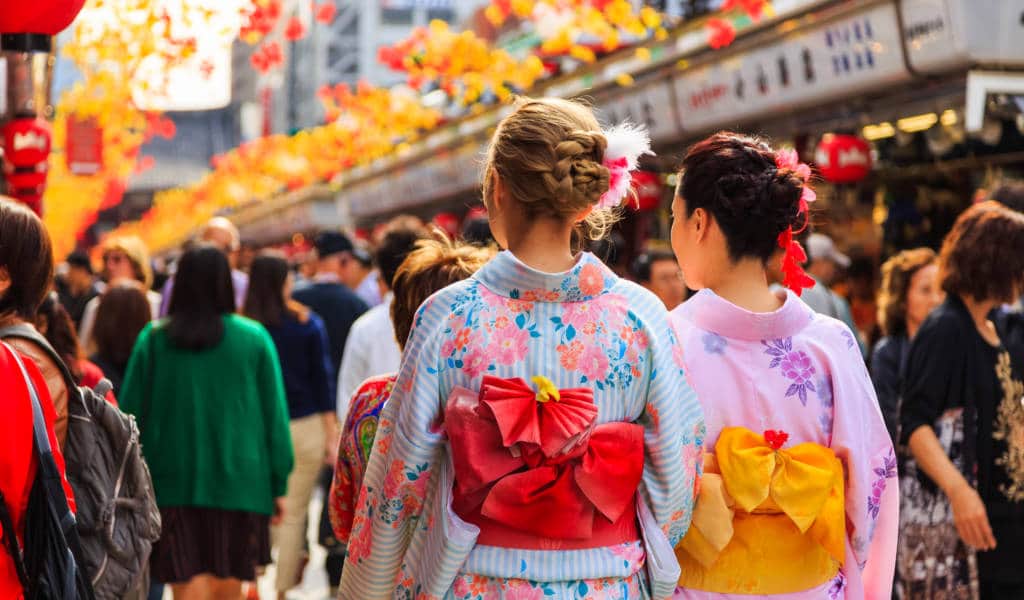 How to Buy a Yukata in Tokyo Without Breaking the Bank

The yukata is the casual, hot-weather cousin of the kimono. As characteristic of Tokyo summer as shaved ice, fireworks and watermelon, a yukata will help keep you cool in the sweltering heat (and we do mean sweltering). Yukata are great for personal wear (for all genders) and gifts, and if you know where to shop, you can pick them up for next to nothing. Looking to snag one? Read the following guide on where to buy a cheap yukata in Tokyo.

Yukata basics: What you need to know

Yukata are worn in the summer months (June-September), when festivals (matsuri) and fireworkds abound. You’ll see yukata-clad folks young and old dancing the bon-odori or awa-odori in parks and through the streets — and it all looks pretty awesome.

The yukata is essentially an unlined, very basic kimono. Like kimono, they are worn with a belt (obi), which for women sits tight around the waist with a bow at the back, while for men a narrower obi sits on the hips and tied with a knot (that can be varying degrees of fancy). The prescribed footwear is geta (traditional wooden sandals), worn without socks (remember, it’s hot). Some people carry a small handbag for their keys, wallet and phone, while others (this writer included) just shove things down their sleeves.

Yukata originated as bathrobes hundreds of years ago, and gradually evolved into high-fashion items. You can still find cheap yukata that are closer to their roots in traditional Japanese hotels (ryokan) and hot spring towns.

These days, yukata come in an array of beautiful patterns, ranging from flowers to animals, geometric patterns to dragons and even anime characters. And the item of dress is prolific. Everywhere seems to have their own take on them — from Uniqlo to boutique punk and fusion-fashion outlets.

Where to buy cheap yukata in Tokyo

So, onto the main thread of this article. You can pick up a yukata set (yukata + obi) for anything from a few hundred yen to upwards of ¥50,000. That’s a huge price range, but it all depends on whether you want new or secondhand, understated or high fashion — and yes a bit of luck too. If you set aside ¥3,000–¥6,000, you should be able to find something decent at one of the places listed below. ¥10,000+ will get you a better-quality yukata set, and if you are prepared to pay ¥20,000 you can scoop one from a boutique. But you’re here because you want the cheapo low-down and our philosophy is that a nice yukata doesn’t have to be an expensive one.

The first place to try is your local supermarket — if it’s a large one, anyway. Big stores like Aeon, Ito-Yokado and Daiei often sell yukata from May or June onward; just head over to the clothing section/floor and look around. I picked up several yukata sets for no more than ¥2,900 each a couple of years ago — they were the previous summer’s styles (read: slightly different placement of carp and flowers), and had been discounted as a result.

Another good bet for cheap yukata is a big clothing retailer like Uniqlo (for new items), or Mode Off and Chicago (for secondhand outfits). Uniqlo doesn’t always bring out a line of yukata, but when they do, they tend to sell out fast — so keep an eye on catalogs in the run-up to June. Mode Off is a bit of a gamble, as you never know what will be in stock. Chicago stores usually have a good supply of yukata and kimono, with price tags that cheapos appreciate. They have several stores scattered across Tokyo but the one near Meiji-Jingumae Station in Harajuku seems to have the biggest range of yukata/kimono.

If you want to go straight to the source, as it were, you can hit up one of the many specialist stores in Tokyo. Tansu-ya is a good go-to, as they have branches all over the show and sell both new and used yukata (and kimono). They offer dressing assistance, too. Mom-and-pop shop Sakaeya in Harajuku is a bit cheaper. It sells secondhand yukata and kimono starting at ¥1,000 (yes, really) and will help you figure out how to wear it, plus throw in a mini tea ceremony. Just be sure to book ahead, as they’re currently open by appointment only.

If you’re feeling a bit more adventurous head to Miyoshiya on the basement level of Nakano Broadway. Prices here can start as low as ¥550, but most are in the ¥1,100–¥3,300 range. You’re going have to invest some time sifting through less appealing — and possibly very dusty — yukata until you find the one you want, but that’s the fun of it (for some of us anyway).

For a vibey yukata-hunting experience that is filled with food on sticks (think fish-shaped pastries with sweet bean paste filling) and several other bargains, head down to one of Tokyo’s popular shopping streets (also called shōtengai). We recommend Nakamise Dōri in Asakusa (a good chance to take in Sensōji Temple, too), Yanaka Ginza (in Ginza), and Ameya-yokochō between Ueno and Okachimachi.

If your schedule allows it, you can go to one of Tokyo’s flea markets for a spot of yukata-hunting. There is at least one market happening most weekends, with major venues being Yoyogi Park, the Ohi Racetrack in Shinagawa, and the West Exit area of Ikebukuro Station. You might be able to scoop a yukata (and pick-and-mix obi) for a single 1,000 yen note.

If you don’t have much time or loathe shopping, you can always order a yukata online. A big plus of online shopping is that you have access to a huge range of yukata to choose from. Just make sure that the size and color is exactly what you want before you click that checkout button. One online retailer to try is Rakuten (said to be responsible for as much as 10% of the kimono industry’s sales).

There are several other ways you can get your gaijin paws on a yukata. These include browsing department stores (they usually have a dedicated yukata/kimono section, but be warned — the items tend to be upmarket and expensive), local recycle (junk) shops, and even discount legend Donki.

How do I wear a yukata, exactly?

Before we wrap up the post, a quick note on, well, wrapping up. Yukata are not the easiest things to get right, especially if it’s your first time wearing one. The staff at places like Tansuya and Sakaeya are more than happy to assist if you buy or rent a yukata from them. If you want to try your hand on your own, you can find numerous how-to videos on the interwebs.

Just looking to try a yukata out? You can rent one for the day (and get photos taken) at Tansuya and Sakaeya (mentioned above). For more information on the rental option, check our our comprehensive guide to kimono rental.

Where to buy a jinbei

If you aren’t so keen on the robe thing, you might prefer to buy yourself what we like to call “old-man summer pajamas”, and what the civilized world refers to as jinbei. Also known as hippari, jinbei are gaining popularity among people of all genders and ages, though they were traditionally summer wear for men — and house wear, at that.

A set consists of a short-sleeved jacket and either short or long pants. Jinbei are made of cotton, hemp or something similar and are super cool in the hot months (much cooler than yukata, actually). You can wear them at home and to festivals. Look for them in the same places as yukata and kimono — they aren’t expensive.

This post was last updated in October 2022 by Maria Danuco.