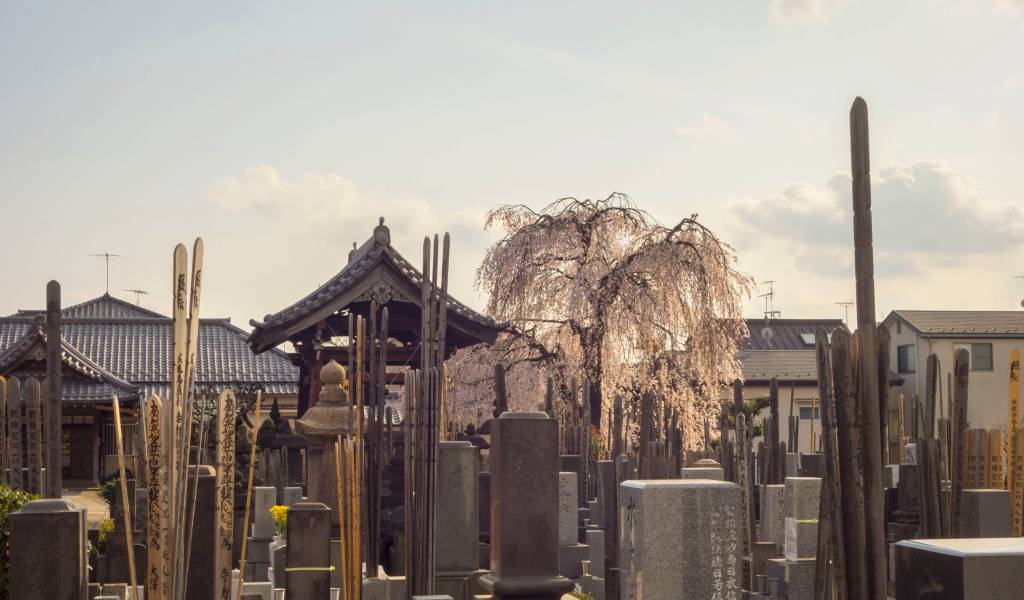 Narrow winding streets lined with new indie cafés and senbei (rice cracker) shops passed down through generations, Yanaka in Tokyo is the perfect place to while away an afternoon.

This quiet neighborhood with a popular market street, beautiful sakura-lined cemetery and plenty of temples is just a short walk from Ueno Park. The charm of the area is preserved by the tendency to re-purpose older buildings rather than rebuild, creating a contrast between traditional and modern that is somehow reassuring. You can sample the old-fashioned treats of Japan followed up with some modern takes on their specialties, all within meters of each other. Whether you’re normally a wanderer or not, here you just can’t help it — every sidestreet is promising and each corner offers myriad possibilities. So allow us to give you a taste of what to expect before you head out to Yanaka yourself.

Pro tip: If you don’t want to miss anything, you can book a guided walking tour of Yanaka.

Found in the Shitamachi district of old Tokyo, Yanaka forms part of the Yanesen area along with Nezu and Sendagi. Meaning ‘under city’, Shitamachi was once the lower side of Tokyo both literally (as marshland) and culturally, compared to the affluent Yamanote area. Dating back to the very formation of the city, the division arose when the Tokugawa shogunate gave the higher grounds to the artistocratic families (Yamanote meaning ‘mountain hands’) and filled in marshlands for merchants and tradesmen. While the names were never official, they stuck and are still used today by way of explaining the atmosphere of different areas.

Miraculously undamaged by wars or natural disasters (largely at least), the Yanesen area has become a popular spot for regeneration. With a temple-town feel, narrow streets, wooden houses and plenty of backalleys to explore, the mix of genuine old spots and their retro-style neighbors is surprisingly pleasing. Of the 3 areas, Yanaka has the liveliest feel with the busy Yanaka Ginza shopping street, great variety of cafés and coffee shops and the array of temples to explore.

A beautifully well-maintained cemetery with a cherry-tree-lined central pathway, this is a lovely start to your wanderings as it is just around the corner from Nippori Station.

Suggested Activity
Yanaka Area Tour: Stroll through Tokyo’s History
Even in a modern city like Tokyo there are still some areas that preserves the quality and lifestyle of times gone by. Yanaka is one of those areas, with a traditional market-style shopping street, temples and shrines, Edo-era architecture and a beautiful cemetery. Explore the area with a guide, sample local Japanese snacks and dishes, snap a pic of the ...
Click here for details

Although the cemetery was once a part of Tennōji Temple, it was separated in the Meiji Era (1868-1912) and is now the biggest cemetery in Japan, with over 7,000 graves filling the 25-acre space. Despite its size, the graveyard is meticulously cared for and even has its own police box to keep things ticking over.

While the cemetery is generally peaceful, it has its own ghostly stories and tragic tales. Tennōji was once home to a 5-story pagoda, but in 1957 2 lovers burned it down in a suicide pact, with their ghosts believed to wander the area. These days however, you’re more likely to stumble across some of the local cats sunbathing between the twisted trees.

There are plenty of famous names in the cemetery, including the last shogun of the Edo period, Tokugawa Yoshinobu along with Ichiyō Higuchi — Japan’s first prominent modern female writer, who can be seen on the 5000-yen note. Aside from keeping an eye out for grannies on bikes, it makes for a very relaxing, historical stroll a million miles away from the busy streets of Ueno.

After descending the TV-famous steps into Yomisedōri, you can explore the 80+ shops and stalls of this street, which feature everything from bento boxes to butchers, sake bars to sandals and enough cat-themed things to please even the most discerning cat lover! For souvenirs and gifts you can peruse the traditional pottery or toy shops, as well as numerous shops offering smaller goods like tins and handicrafts. There are art galleries to see and all kinds of food to try, including traditional sweets like manjū (a cake-like sweet made with soft rice flour and filled with red bean paste). If your feet need a break there are coffee shops and sake bars (depending on what kind of day you’re having), each with their own style and appeal.

Cafés and coffee in Yanaka

If you need something more substantial to eat, we recommend the deli lunch plate at Capleville, down a little sidestreet to your left just after you pass the Yanessen Tourist Information Center. The seasonal lunch plate has a variety of homemade treats and fresh bread and is delicious, especially at just over ¥1,320. The chef went out of his way to make it vegetarian — offering to make hummus for us (an offer no one should turn down!). They also have an impressive range of alocholic and non-alcoholic drinks, and other seasonal food offerings.

For a caffeine hit: Yanaka Coffee

Yanaka Coffee is a local chain with a cult-following and a welcome preference for books over phones. While normally chain stores have a quantity-over-quality feel, that’s not the case here, with freshly roasted beans and individual store designs giving it the feel of an independent shop that’s grown organically.

For a sweet treat: Yanaka Kenshindo

For the green-tea afficionados, Yanaka Kenshindo is a cute tea room with traditional sweets to go with your matcha. Focusing on the seasons, their menus change thorughout the year, offering treats like watermelon dango in summer and high quality green tea from Uji in Kyoto.

You may notice from any map of Yanaka that there are A LOT of temples here, which can make for a great rough plan for your strolling explorations. Back in the day temple towns like Yanaka were encouraged because they could be used as forts when under attack. Nowadays, it means you can’t go far without seeing a Buddha peeking out or a golden statue appearing around a corner, which definitely adds to the day.

Tennōji is the most well known, with a centuries-old sitting Buddha and lovely small garden. It was founded in 1274 to house a Buddha carved by Nichiren, it was then temporarily closed for heresy but reopened and later became a seat to the god of resources and bravery. It is also the only 1 of the Yanaka 7 Gods of Fortune Temples that is actually in Yanaka, so you can take on that challenge if you care to, but maybe another day.

The backstreets of Yanaka

This is where the flower shops and coffee joints are lurking, filled with pensioners taking a break between running errands. You’ll see more bicycles and plants than ever before, plenty of dozing cats, and who knows what else (which is the best part). You can rent very nice bikes from the Tokyobike shop, which is a great way to explore the area.

1 of the most popular spots is the ancient Himalayan cedar tree which towers over a small shop at a fork in the road. Featured in plenty of TV shows and films, the tree was supposedly planted just under 100 years ago by the grandfather of the shop-owner. Although attempts were made to cut it down a few years ago, a community group saved the tree as a local point of interest.

Where is Yanaka in Tokyo?

Yanaka is part of Taitō Ward and forms a traditional area called Yanesen with Nezu and Sendagi. It is north of Ueno and can be reached by walking through pleasant backstreets. For train-riders, you can head there from Nippori Station on the JR Yamanote, Keisei, Keihintōhoku or Jōban lines or Sendagi on the Chiyoda Line.

What time does Yanaka Ginza close?

While all the independent shops have their own opening times, generally the area is best between 10am and 6-7pm. Shops are open on weekends and usually close on a Monday or Wednesday, but there is enough variation that these days are still worth visiting if it’s your only chance. Note that if Monday is a holiday, the shops will instead close on the Tuesday.

While we do our best to ensure it’s correct, information is subject to change. This post was first published in June, 2017. Last updated September 2022 by Maria Danuco.