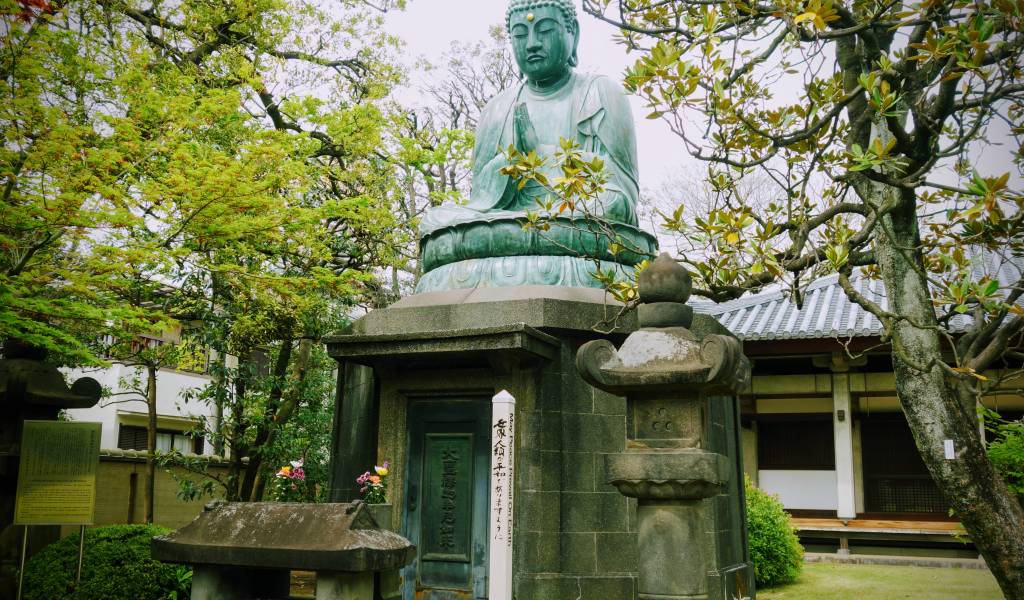 There are many different ways to invite luck into your life in the new year, but if you want to fill two (or more!) needs with one deed, why not try the Seven Lucky Gods Pilgrimage (also known as Shichifukujin Meguri)?

This tradition, which is said to date back to the 18th or 19th century, involves visiting temples (and, in some cases, shrines) to pray to the Seven Lucky Gods. Mostly originating from Buddhism and Hinduism, those seven deities are:

Think of this pilgrimage as an ancient version of the “stamp rally” (a popular Japanese activity that involves collecting stamps at various locations to win prizes)—or Pokémon Go.

At each temple or shrine visited, devotees can get a stamp (goshuin or simply shuin in Japanese) for ¥300 each. Collecting seven stamps is said to bring in good fortune and blessings throughout the year.

Depending on how far the temples are from one another, it can take you anytime between a couple of hours to half a day to complete your quest (and that’s assuming that you don’t get sidetracked).

The Seven Lucky Gods pilgrimage can be done anytime, but most people who take part in this tradition do so in January. After all, why not get a head start and receive your blessings at the start of the year? It’s believed that the Seven Lucky Gods arrive with their treasure ship full of gifts around New Year’s. The 1st to 7th of January, in particular, are auspicious days associated with these deities.)

But there’s also a practical aspect to it: many participating temples issue a special board (shikishi) or scroll for the stamps only throughout January. Note that this usually doesn’t come for free.

With Tokyo having so many temples and shrines, pretty much any neighborhood is bound to have a Shichifukujin Meguri. It’s just that not all neighborhoods and participating temples bother to advertise themselves. (Even among Japanese, this tradition, while not extremely obscure, isn’t that well known, either.)

Here are some pilgrimages with information in English:

Temples in Zoshigaya (near Ikebukuro), Asakusa, and Meguro are also known to organize such pilgrimages.

Of note is the Yanaka Shichifukujin Meguri, which is said to be the oldest such pilgrimage in Tokyo. Just like the rest, you can do this anytime, but during the first weekend of January, the merchants’ association of the Yanaka Ginza shopping street (access: Nippori Station) helps organize this pilgrimage.

So what does that mean for you? On that weekend, there will be a registration booth at Yanaka Ginza. The first few hundred to register can get a scroll and a hot drink for free, as well as the chance to win prizes in a lottery.

If you miss the cut-off, don’t worry—you can still get a scroll; you just have to pay a few hundred yen for it. And as long as it’s still available, you can still buy some food and drinks at the registration booth.

The organizers will give you a map so that you’ll know which temples to visit and how to get there. Unfortunately, the information is only in Japanese, so we’ve listed out the temples and their addresses for you. Several of these are just around Yanaka, but some will take you as far as Ueno. You can finish the entire course on foot or take the train; it’s not like you’ll get fewer blessings if you take the easy way out!

In the process of collecting seven seals, you get some exercise and you also get to explore an old-school neighborhood. So, whether you actually believe that this can turn your fortune around, or you just want to start the year on a good and interesting note, be sure to embark on this charmingly fun quest in January.

Written by: Tiffany
Filed under: Sightseeing
Tags:
Sharing
Questions or comments about this article?
Start a thread on our community forum
Ask our local experts about Tokyo