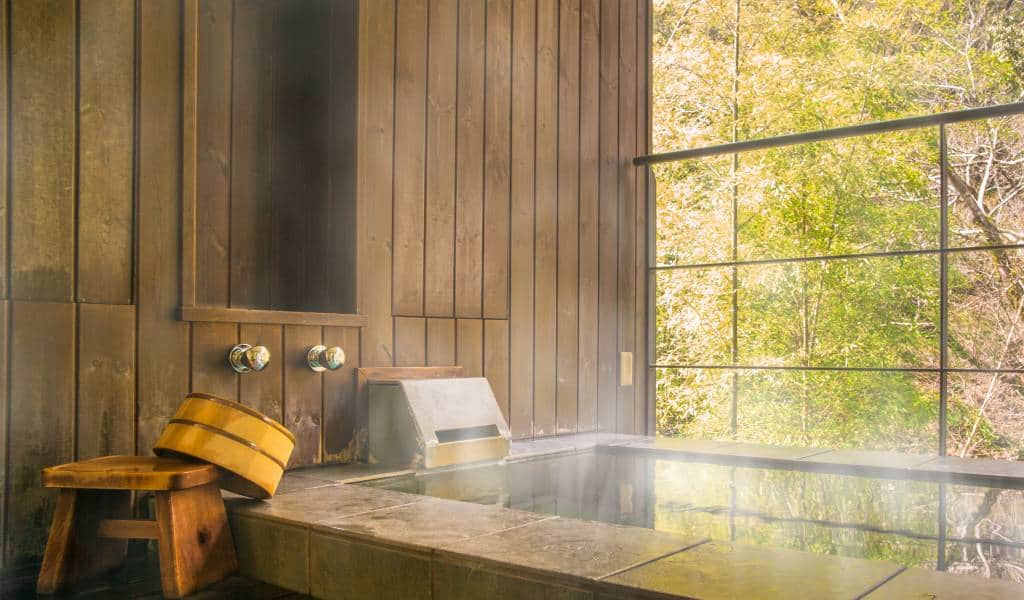 A Guide to Ryokan in Japan: What to Expect, Booking and Etiquette

What is a ryokan?

The official translation for ryokan is a “Japanese-style inn”. Originally, they were mainly located along the ancient road that connects Kyoto and Tokyo, the Tokaido Highway. Samurai and merchants traveled this route and were in need of accommodation. While the word “inn” might evoke images of medieval, rather rough wayside accommodation for travelers on horseback, ryokan are far from it. On the contrary, they range from mid-end to luxurious.

What sets them apart from a minshuku, a traditional Japanese bed & breakfast, is the level of service and facilities. You can usually expect tastefully decorated rooms, a dining room (either shared or private), common rooms or a lounge, and most important, several onsen (hot spring) baths. There are usually both private onsen for rent (kashikiri) and shared public ones separated by gender, as well as other appealing points to the property, like a beautiful Japanese garden.

However, ryokan are also small or mid-size properties and usually family-owned businesses, which is a big part of their charm. In addition, they are typically housed in older traditional buildings and look back on a long history. Or in some cases a VERY long history! Japan’s oldest ryokan is Nishiyama Onsen Keiunkan in Hayakawa, Yamanashi Prefecture. It was founded in 705 AD and has been run by the same family for an incredible 52 generations for 1,300 years. Sadly (or luckily, considering basic creature comforts) the building itself is not that old, but still a beautiful old Japanese house.

Ryokan nights range from ¥7,000 to ¥110,000 per guest per night. Remember that this includes both a lavish dinner and breakfast. The lower-range ryokan usually already make for a really good experience, so no need to shell out more than ¥10,000 unless you want to spoil yourself for a night.

How does it work?

People usually stay at a ryokan for one night to enjoy the particular inn’s facilities, namely, the hot spring and the food. Check-in is typically at 3 pm, at which time the staff will show you around all the facilities, including the baths, and explain the bath, dinner and breakfast times. Then you can retire to your room, drop off your bags and change into yukata (Japanese robes) that are either laid out for you or hanging in one of the closets. People either head straight to the onsen or explore the surrounding areas.

If there is something fun to see—like snow monkeys in a hot spring, waterfalls, flowers in bloom and the like—the ryokan will usually tell you where and often provide cute hand-drawn maps to guide you. Dinner is usually served between 6:00 and 8:00 p.m. and the staff will often ask you what time you would like it so they know when to start preparing for your party.

Most people head back to the onsen for a second round after dinner before they retire to bed. And don’t be surprised if your futon bedding was magically made by the house elves while you were enjoying your dinner. This is part of the service. Bedtime at ryokan is quite early. As they are often in rural settings, there isn’t much else to do after dinner and bathing.

In the morning, the same spiel repeats: staff will often want to know when you would like to eat to prep accordingly. Breakfast is usually between 7 am and 8:30 am. Many will take the chance to enjoy the warm water one last time either before or after breakfast. Again, your bedding will have probably vanished seemingly by itself while you were out to eat. Check-out is at 10 am. There are often shuttle services to the nearest train station or points of interest that travelers like to check out before returning home.

How and where to book ryokan in English

You can find ryokan all over Japan on hotel booking websites like agoda. You can try “ryokan” as a search term, but many properties do not carry it in their listing name, so you won’t get a full list. The official translation “Japanese inn” is also almost never used. The smartest search would probably be to go via the location you want to travel to. Especially if it’s an onsen town, most properties you find will probably be ryokan, even though the translation might say “hotel.” You can easily tell if it’s the case by the pictures of the rooms and whether or not there are onsen facilities.

If you want to stay close to the famous bath house that inspired the Ghibli movie “Sento no Chihiro”, you might want to try Dougoya Ryokan in Matsuyama. This quaint ryokan only serves traditional Japanese breakfast, making it a good option for those who want to save some money on their ryokan experience.

If you want to combine your ryokan stay with a glimpse of the famous snow monkeys soaking in an onsen, try Senshinkan Matsuya in Yudanaka. The traditional building is absolutely stunning and you can enjoy all the public onsen baths in Yudanaka for free while walking around in your yukata (free to rent from the ryokan).

A bit closer to Tokyo would be Hatago Kintoen in Hakone. While a traditional ryokan, it has some simplistic and modern touches and a beautiful outdoor onsen (called rotenburo in Japanese) with a view of the forest. You can also find a few ryokan in Tokyo itself.

Another great option to consider is the award-winning Oyado Taketori Monogatari in the beautiful Chichibu area of Saitama Prefecture, easily accessible from Tokyo. This cosy ryokan has just seven rooms, with hot spring baths and authentic Japanese cuisine on offer for guests.

Most ryokan are very welcoming to foreigners. But this doesn’t necessarily mean that the staff will speak English! However, many establishments have an English map of the area ready for you, an English translation of the dinner or even a little cheat sheet in English that they ask you to read at check-in that explains the rules for the baths and meals. If you try to speak a little bit of Japanese, even pointing at sentences in your guide book, they will almost always try their very best to communicate with you and maybe even remember a few bits of English.

Make sure not to come later than the time you gave them—also in your own interest as your food could be sitting around and getting cold while they wait for you.
Both dinner and breakfast are set meals. They can usually accommodate vegetarians, but vegan is most likely impossible.

The yukata in your room can be worn not only when heading to the onsen, but are also appropriate attire for dinner and breakfast. Make sure the left side of the yukata lies on top when closing it—otherwise you look like a dead person (the right side is put on top when dressing the deceased).

Don’t make or fold away futons unless told to do so. Conveniently, they will put out the futons for you. If they do want you to make your own beds, they will tell you where the futons are when they show you your room.

Obviously, wash before entering the onsen and follow the general onsen etiquette. Make sure to know which kanji on the entrance represents which gender! 女 (onna) stands for women, 男 (otoko) for men.

Ryokan have early nights and early mornings. So make sure to keep the volume down after 10 pm as the walls are often paper-thin. Check out is at 10 am.