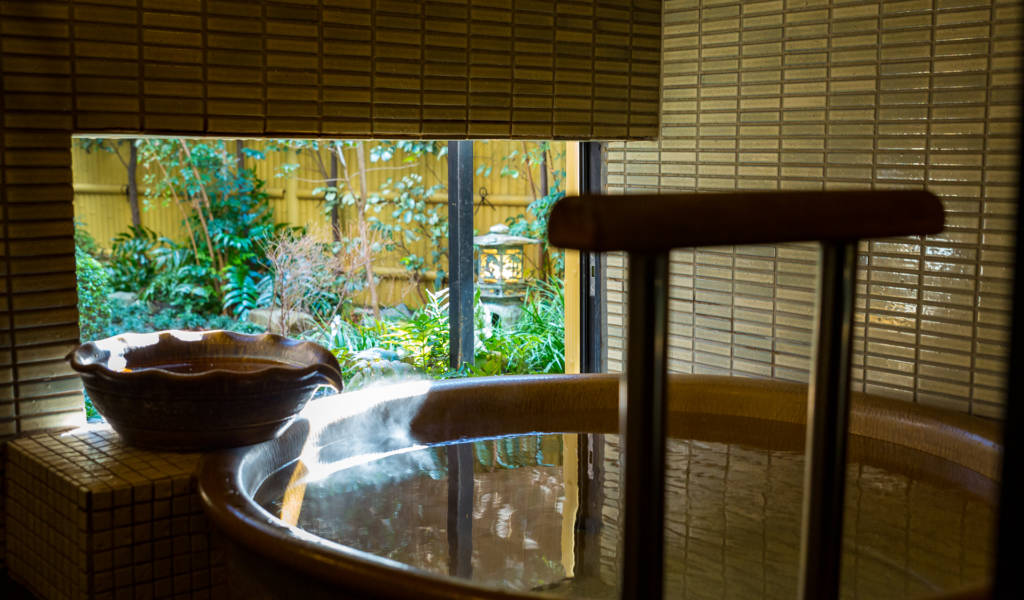 Ryokan, Japan’s traditional guesthouses, are the perfect places to soak up Japanese culture. The only problem? They’re often way out in the countryside. Getting out to the sticks isn’t always easy, especially if you’re on a whistle-stop tour of Tokyo. But these three Tokyo ryokan are right in the heart of some of the capital’s most historic neighborhoods, making each a perfect base of operations for your stay here. Plus, they offer cheapo-friendly combo deals.

Andon is Tokyo’s original “designer ryokan”, and it’s not hard to see why from inside. There are thoughtful touches from floor to ceiling and in every nook and cranny. Built to reflect the convergence of old and new, the modern construction techniques and materials are used in homage to the fundamentals of old-school Japanese design.

Light is an especially important part of this Tokyo ryokan experience—many of the fixtures are deliberately screened or obscured to give a comfortable ambiance that’s less stark than you might expect in a modern building.

The owner of Andon Ryokan, Toshiko Ishii, is a devoted antique collector, so the carefully curated ephemera throughout the building are on regular rotation. It’s anyone’s guess where it all goes when it’s not on display!

It’s well worth heading up to the rooftop if you’ve a spare moment—it’s a great secluded space to plan your next step over a drink, with views of Tokyo Skytree to boot.

Pro tip: Explore the toilets and bathrooms on each floor for a little extra culture.

If you’re staying at Andon Ryokan, Japan’s second-largest fish market is well worth a visit—it offers the opportunity to recapture the magic of the legendary Tsukiji Fish Market. Adachi Market is only open to the general public once every couple of months, but if the stars happen to align for you, we’d highly recommend going.

Aside from the sheer spectacle of the place, there are some great deals to be had on fish, meat and veggies, as well as your traditional Japanese staples—rice, pickles etc. If you speak even a little Japanese, expect to be quizzed by a chatty local old-timer or two!

If you’re looking for a place to stay that allows you to get there early, you can stay at the nearby Andon Ryokan. The fish at Adachi Market aren’t always as big or as prestigious as you might see at the new Toyosu Market, but in exchange you can expect to be a lot closer to the action and a lot less crowded by tourists.

In the center of old-town Tokyo, family-run ryokan Sawanoya is like lodging in a time capsule. Isao Sawa, currently the third-generation hotel owner, recounted a time in his childhood when similar businesses were losing trade to more modern Western-style hotels. Back when many local businesses were still turning foreign guests away, the family saw potential to carve out a niche, and advertised to guests abroad (who would make reservations by post, no less). Sawanoya’s reputation grew from there, putting them right at the top of the Tokyo ryokan scene based on customer reviews.

Ryokan like this may not be able to compete with the slickness of more modern hotels, but Sawanoya compensates with genuine charm and warmth. Visitors can expect explanations of local customs and holidays throughout their visit—and possibly even invitations to join in the local fun. As a result, Sawanoya sees a lot of repeat customers. There aren’t many hotels where you can see the same friendly faces for over 50 years!

Pro tip: Don’t forget to enjoy one of the public baths at Sawanoya Ryokan. Looking out into the traditional Japanese garden, it’s easy to forget you’re in central Tokyo.

There’s plenty to do in the area, which includes Yanaka and Nezu. The old ways are very much alive here, and it’s one of Tokyo’s few shitamachi (old-town) neighborhoods. If you’ve already packed out your schedule, you owe it to yourself to at least visit Nezu Shrine and grab a snack.

Nezu no Taiyaki, opened in 1957, is perhaps Japan’s most renowned taiyaki (sweet, crispy, fish-shaped, bean stuffed pancakes) store. Try to show up before 1pm—when they sell out, they shut for the day!

If you’ve a little more time on your hands and are keen on a ryokan experience, consider staying at the ryokan. They should be able to offer lots of advice on the neighborhood.

Just 10 minutes from Ueno Station, this little ryokan in Tokyo is a convenient option for most travelers. What Komatsu Ryokan lacks in size it makes up for in character, with friendly staff and communal spaces designed to get you chatting with fellow guests.

The rooms are furnished with traditional tatami mat flooring, and make great use of space. The toilets and bathrooms are all communal—so be prepared to wait a little for a shower if you forget to reserve it. A sign on the door encourages friends and lovers to shower together to save time. Who knows? You might just come out closer for it.

Critically, there’s a code to get back in—so unlike many other ryokan, which have curfews in place, you’re free to go carousing and stagger back (quietly) in the wee hours.

If you’re interested in local activities, there are sumo training sessions in nearby Asakusa (perfect for when tournaments are off-season). There are also options to eat chanko-nabe as the sumo do, or dye your own traditional fabrics.

Pro tip: Undecided on dinner? The yakitori (grilled chicken) restaurant next door to Komatsu Ryokan waives the usual table charge for guests. Check the pin-board by the desk for a voucher. Word is the food is delicious and the locals are a lively lot—perfect for practicing your Japanese.

Written by: Felix Wilson
Filed under: Places to stay | Things to do
Tags:
Sharing
Questions or comments about this article?
Start a thread on our community forum
Ask our local experts about Tokyo