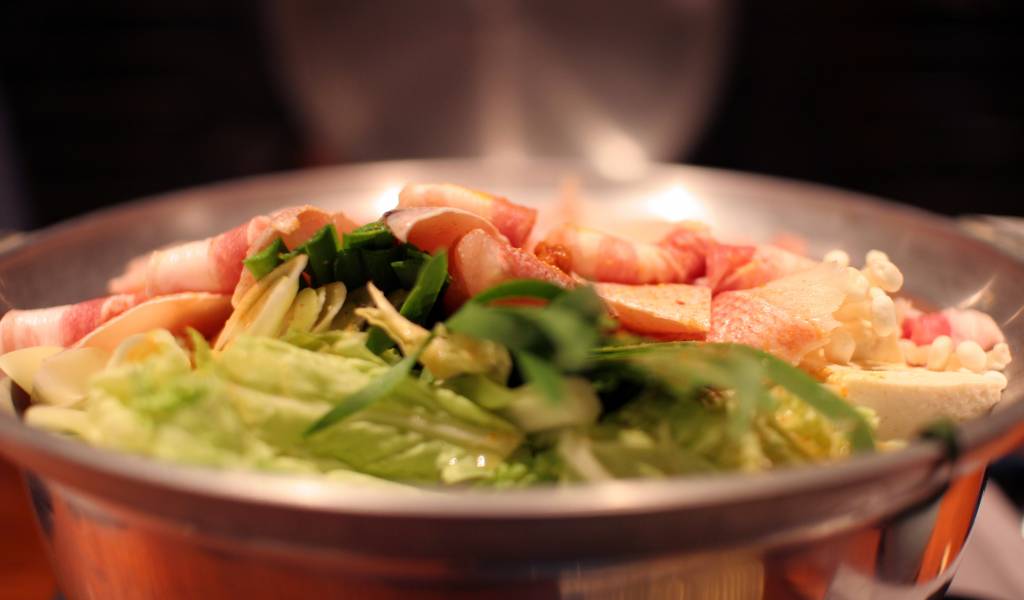 Aside from oden, nabe (hot pot) is another popular cold-weather dish in Japan.

Nabe literally means “pot,” but it’s used as a generic term for soups or light stews cooked in an iron or clay pot. Made with dashi (soup stock), vegetables, and meat, nabe has many varieties, with some notable examples being:

Nabe keeps tummies full and makes for a great social activity. It’s not uncommon to have nabe parties at home, with families and friends dividing the preparation tasks then taking their share from the same pot. Of course, you can also enjoy nabe in restaurants and izakaya, and seeing as the cold spell is just getting started Tokyo, you’ll want to get your fill at a wallet-friendly price at these nabe restaurants.

With about 30 branches all over Tokyo, Kanagawa, and Saitama, Nabe-zo is known for its all-you-can-eat courses. The menu may vary per branch, but at most branches, their standard lunch course is ¥3,023 (including tax) for a 100-minute buffet of pork, beef, vegetables, side ingredients such as udon and dumplings, and – for dessert – ice cream. Discounts are also available for children and senior citizens at any given time.

A popular all-you-can-eat shabu-shabu and sukiyaki restaurant, Mo-Mo-Paradise has inexpensive shabu-shabu and sukiyaki courses. It used to have several branches, but now, it only has one branch in Shinjuku’s Kabukicho. The standard course is a 100-minute one for [pice amount=2700] (including tax), which gets you beef, pork, vegetables, rice, and noodles. Discounts for children and senior citizens are also available.

Not to be confused with the Osaka-based upscale yakiniku chain of the same name, Shabu-shabu Tajimaya—which has branches in Shibuya, Asakusa, and Tokyo Station’s Yaechika shopping lane—really puts the cheap in cheapo. At its Shibuya branch, for instance, the cheapest lunch course is ¥864 for 120 grams of chicken shabu-shabu or sukiyaki, plus all the vegetables, rice, udon, curry, and ice cream you can eat for an hour. Oh, and did we mention that drinks are free-flowing, too? If you also want to eat as much meat as you can, there are 90-minute courses available for both shabu-shabu and sukiyaki: pork for ¥1,566, and beef for ¥1,782.

Like the others mentioned so far, this is also a chain of restaurants; as of this writing, Onyasai has nearly 90 branches in Tokyo alone, including Asakusa, Akihabara, Ikebukuro, Ueno, and Shibuya. Onyasai’s 2-hour shabu-shabu or sukiyaki courses all come with all the vegetables, side dishes, meatballs, and toppings you can eat. Dessert also comes at the end of the course.

The cheapest course is the pork-and-chicken one (¥3,003), followed by the beef-and-pork course (¥3,219). The basic soup stock for all courses here is a beef (specifically, wagyu) soup stock, but you can choose an additional soup stock—soy milk, sukiyaki broth, kelp, or a spicy broth—for free. Kids and senior citizens also get discounts here.

This is a specialty of Fukuoka Prefecture’s Hakata city, but you can also find some motsunabe restaurants in Tokyo.

The company behind Hanamidori owns multiple restaurant chains all operating under the same name, but the Hanamidori chain that specializes in motsunabe has three branches in Tokyo—at Shinjuku, Shibuya, and Ueno. Motsunabe courses are for groups of two or more, and the cheapest course starts at ¥3,350 per person.

With guests having difficulty getting reservations at its Ebisu branch, this popular restaurant is said to serve the best motsunabe in Tokyo. Except for one, their motsunabe are named after colors—white for a miso-flavored one, red for a soy sauce-flavored one, gold for a ponzu-flavored one, and silver for an oxtail-flavored one. You can guess what the exception, called “flame,” looks and tastes like—it’s fiery and spicy. An order of motsunabe is ¥1,580 per head, but note that orders for nabe are for groups of two or more.

The Ebisu branch aside, Arizuki has three more branches: at Shibuya, in Tokyo Skytree’s Solamachi shopping complex, and on the 14th floor of Tobu Ikebukuro. Reservations, especially at the Ebisu branch, are highly encouraged.

Sumida Ward’s Ryogoku is a hotspot for chanko nabe restaurants, as it is known as the heartland of sumo wrestling.

Kappou Yoshiba is a former sumo stable, and both its facade and interiors clearly reflect that fact. It has even managed to preserve its sumo ring. Be sure not to come alone, because even if you have the appetite of a sumo wrestler, Kappou Yoshiba only serves chanko nabe for parties of two or more, unfortunately.

Their cheapest chanko nabe, which is good for two, costs ¥4,600. That’s well and good, but we recommend that you try the Yoshiba chanko nabe, their house specialty. For one, they use their own recipe for the swordfish balls, just one of the many fresh toppings and ingredients in this hearty dish. All ingredients have been carefully chosen and recommended by traders from the famous Tsukiji fish market.

Kappou Yoshiba also has other delicious dishes, such as sashimi. Their lunch sets start from ¥880. Additionally, the restaurant offers some entertainment options for guests to enjoy while savoring their meals. On certain nights, guests will be treated to performances of sumo-themed folk songs and more.

Owned by a family of sumo wrestlers, Sumo-Chaya Terao has single-serving chanko nabe for ¥2,500–¥2,800. There are 5 variants, differing according to soup base: soy sauce, curry, ponzu, salt, and miso. They also serve lunch sets for ¥1,200 and ¥1,500, which consist of chanko nabe, udon, zosui (a kind of rice porridge), and your choice of a drink or dessert (the last option is only for the ¥1,500 set, though).

Operating for 40 years as of 2017, Tomoegata is an oft-mentioned favorite for chanko nabe enthusiasts. They serve chanko nabe lunch sets for [¥1,295 and ¥1,940, and they serve a different kind each day of the week—pork miso on Tuesdays, duck dumplings on Wednesdays, and so on. The menu also changes depending on the season. Course meals for groups of two or more are available.

This article was last updated in August 2017.