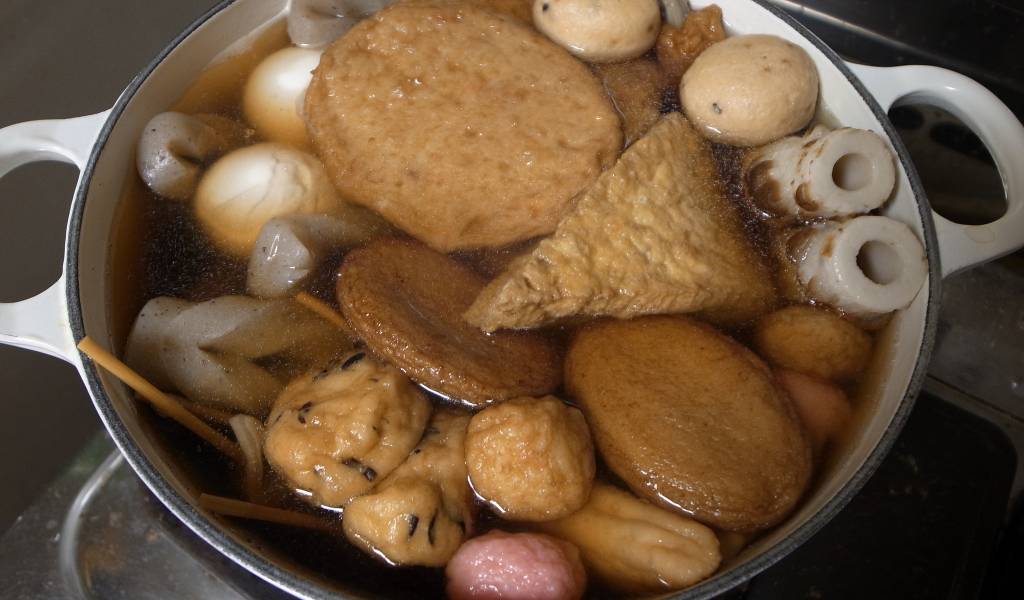 Nothing signals the start of the cold months like oden. As early as September, convenience stores start rolling out simmering oden pots, with various ingredients suspended in a broth made of soy sauce and dashi (fish or seaweed stock). While it’s a winter favorite for many Japanese, oden can understandably come across as strange to foreigners due to its unfamiliar ingredients and odd appearance. We think it’s time to demystify this tasty dish!

The earliest incarnation of oden was the dengaku of the Muromachi period (14th-16th centuries). Named after dancers that performed on stilts during planting season, dengaku referred to tofu on skewers, usually simmered in miso broth. During the Edo period in the 17th century, miso was replaced with soy sauce, and dengaku became shortened to “den,” with the honorific “o” added as a prefix.

What’s In Your Oden?

Here are some common ingredients. You’ll notice that most are variations on fish cakes and tofu.

Some regions have their own variations on oden, though. In Okinawa, for instance, the broth is pork-based, and tebichi (pig feet) is one of its unique ingredients. Shizuoka oden uses a darker-colored beef-based broth, while Nagoya adds slightly sweet miso to its broth. In Osaka, oden is sometimes still referred to as Kanto-daki, reflecting its Tokyo roots.

So how do you order your oden? The oden counters are usually self-service, but some convenience stores might require you to ask staff for assistance. The price varies per ingredient. You may be given karashi (Japanese mustard), which has a spiciness akin to wasabi.

It may be harder to find dedicated oden restaurants because it is largely a seasonal dish, but they definitely exist! Otafuku is arguably Tokyo’s most popular oden restaurant, and it’s been around since the Taisho era, about a hundred years ago. Built with wood and featuring a small but pristine garden, this restaurant near Asakusa evokes old-school Japan. It serves not only the staples of oden, but also uncommon ingredients such as maki-yuba (rolled bean curd skin) and scallops. It’s not cheap, but it’s reasonable for what you get. On average, their oden contains about 35-40 ingredients. Prepare to spend at least 3,000 yen for a full meal.

You might also want to try local izakayas, as many offer oden in winter.

Another way is to enjoy oden from carts and stalls called yatai. Such stalls can be usually found at festivals. Some stalls even sell oden during cherry blossom season, so yes, you can still eat cheapo oden when it’s not autumn or winter. Carts, however, are no longer a common sight around Tokyo, so consider yourself lucky if you see one!

If you want to make oden yourself, you can buy all of the ingredients from a grocery. Many groceries nowadays also sell pre-packed oden ingredients, some of which already include dashi. Otherwise, you can buy dashi separately, in liquid or powder form. Oden packets typically cost about 350-500 yen, but the cheapest I’ve seen was only 108 yen, from a Lawson Store 100. It wasn’t bad, but it could’ve tasted better. Still, with a price like that, you can’t really complain.