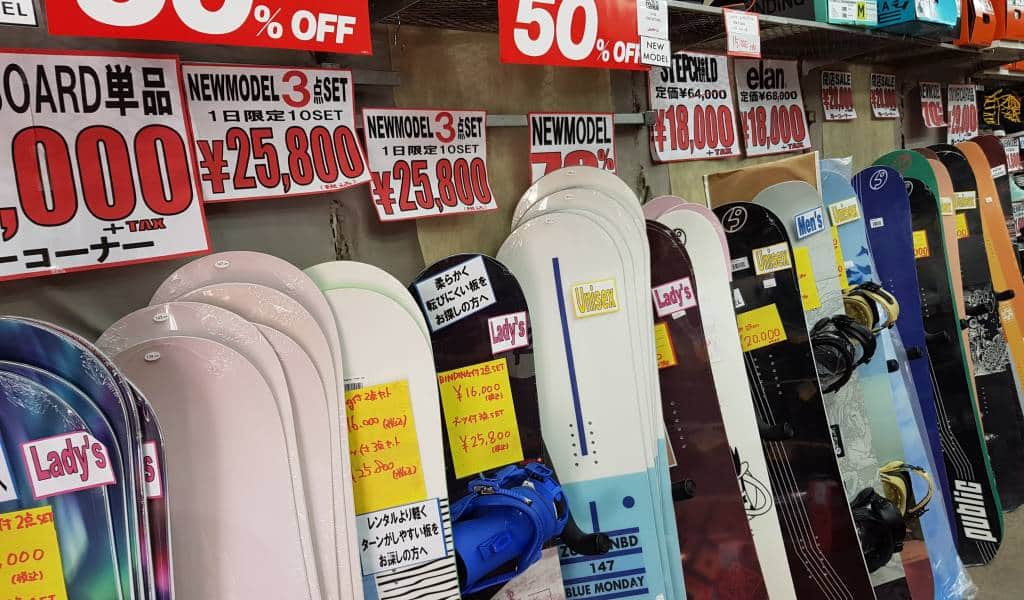 A Guide to Buying New Ski and Snowboard Equipment in Tokyo

Tokyo doesn’t get a lot of snow, but it is where most people stop off on their way to the powder paradises of central Honshu. Tokyo locals are keen skiers and snowboarders, too. As such, it’s no surprise that the needs of both local and international powder hounds are well served.

The one-stop destination for picking up new ski and snowboard gear in Tokyo is the Kanda-Ogawamachi neighborhood. The area boasts an estimated 60+ stores selling all manner of gear related to skiing and snowboarding spread out along a 400 meter stretch of the boulevard Yasukuni-dori between Ogawamachi and Jimbocho stations.

While choices abound, the gear is not necessarily competitively priced. Shopping online usually yields the lowest prices for new gear. If you know exactly what you want, and you are in Tokyo for long enough, see if you can find the item on Amazon Japan. Prices on Amazon can sometimes be 10% to 20% cheaper than the lowest prices in Kanda-Ogawamachi.

The other shortcoming of the neighborhood is that there is little to no secondhand gear. For secondhand gear as well, you’re better looking online. If you’re set on the second hand route to save some money, see our guide to buying used snowboards and skis.

Top tip: For a full overview of your options, see our guide to buying, renting, or shipping ski/snowboard gear in Japan.

Which ski shops should I visit in Kanda-Ogawamachi?

It all depends on what you are looking for. There is a mix of small independent shops, big chain stores, and shops that look independent but are actually owned by the same company. All of them keep a pretty close eye on the competition and most prices are aligned. However, one store that is consistently cheaper is London Sports — known colloquially as LonSpo.

The two London Sports stores are near the B7 exit of Ogawamachi/Shin-Ochanomizu Station. The store on the main street sells only clothing — jackets, pants, gloves, etc. The other branch in a basement around the corner sells gear and accessories, like goggles, helmets, boots, skis, and boards. LonSpo doesn’t always have the best stuff, but it is a really good benchmark for prices. If you (or anyone in your group) has a student ID, you get a 20% discount off everything — including items that are already discounted. If you aren’t a student, you can download their app on your phone and get 15% off all purchases. There is also a 20% off coupon for your first purchase, so you get the same deal as if you were a student. The reason a lot of the goggles, helmets, boots, skis, and boards are cheaper at LonSpo is that they often have gear from previous seasons.

After leaving London Sports, you can walk along Yasukuni-dori towards Jimbocho Station on one side until the ski and snowboard shops thin out, then cross to the other side and head back towards Shinochanomizu/Ogawamachi Station checking out different shops along the way. Since you’ve benchmarked prices with London Sports, you can still head there at the end if you couldn’t find anything better.

Don’t be afraid to ask for specific items at the smaller stores if you don’t immediately see what you’re looking for. As mentioned previously, a lot of the shops are owned by the same company, so the staff will often sprint out the door and return a few moments later with the item from a sister store.

Before purchasing, you should ask about point cards or point card apps. It might be a small struggle to install the app (they’re usually in Japanese only) but it might be worth it for the discount.

Ski and snowboard shops in Tokyo start to mark down the prices of gear from about mid-January, but the more serious discounting happens from March onward. March 31st is the end of the financial year for most businesses, so lots of stores hold end-of-financial-year sales with 20% to 30% off most gear. If you’re buying something pricey, you can try your hand at bargaining. However, even with the steep discounts, you may still find better deals online.

You can buy gear during the warmer months, but a few shops (London Sports included) convert to selling summer sports equipment with the skis and snowboards in storage.

October and November are also good months to pick up a deal as stores look to clear stock from the previous season.

What is “Asian Fit”?

A lot of equipment such as boots, goggles, or helmets are labeled as “Asian Fit” or sometimes just “AF”. If you are not Asian, you still might be OK with gear that is Asian Fit, but try it on first.

Asian Fit with helmets means they have a slightly rounder fit. Once again, if you try it on and fits OK, then that’s all that matters.

People of Caucasian or African descent usually have wider feet than people of Asian descent. Asian Fit with ski or snowboard boots means that the boots are narrower. If trying on Asian Fit boots as a non-Asian, make sure you’ve got the socks you intend to wear on the slopes so that you don’t make the mistake of getting boots that squish your feet.

This article was first published in July 2022 and was updated in November, 2022.