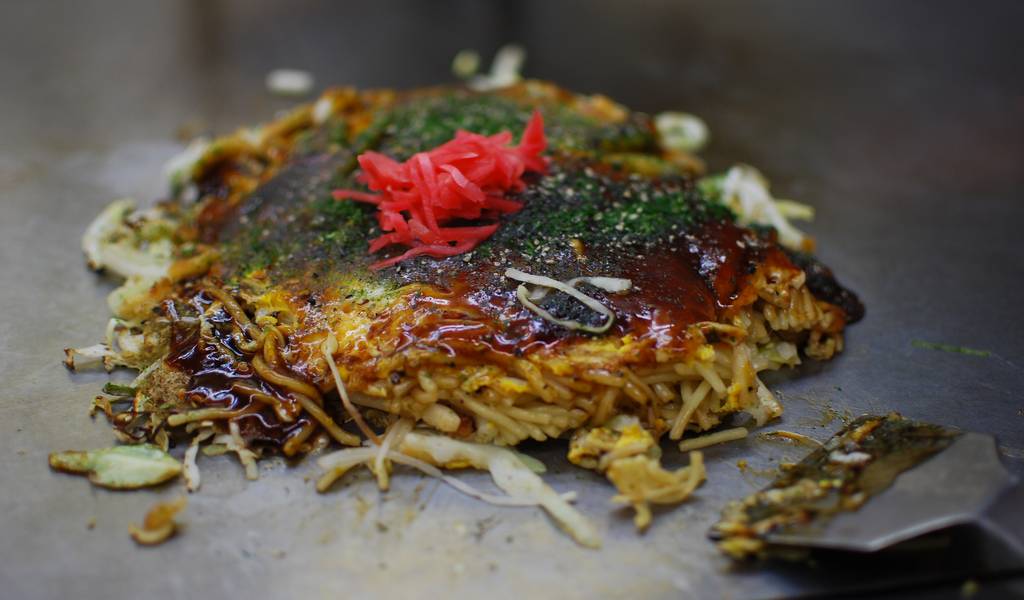 It’s hard to precisely and concisely describe okonomiyaki in English. The common translations of “Japanese pizza” or “Japanese pancake” just don’t do it justice. Literally translated to “grilled as you like it,” okonomiyaki is something like a savory pancake with various ingredients, some common ones being pork belly, cheese, cabbage, spring onions and seafood. It’s then topped with bonito and seaweed flakes, mayonnaise and okonomiyaki sauce.

While its historical origins are unclear, a Taisho-era (1912-1926) dish from Kyoto called issen yoshoku, a thin, savory crepe with an assortment of ingredients and swimming in sauce, might have been its predecessor.

It’s claimed that no area makes okonomiyaki better than these two. However, both Osaka and Hiroshima have their own distinct ways of preparing okonomiyaki, leading to a slight rivalry over which does it right and better.

Where to eat: Okonomiyaki restaurants in Tokyo

While Tokyo has monjayaki, its own take on okonomiyaki which is runnier (try it at the famous monja-street in Tsukishima), there are also restaurants where you can savor good old Osaka and Hiroshima-style okonomiyaki. Here are a few (in no particular order):

Tucked in a back alley of Harajuku, with some creative wall designs Sakuratei, is a great place to start if you’re new to okonomiyaki. The restaurant has an English menu, and has a laid-back ambiance. It claims to owe its popularity to the fluffy texture of its okonomiyaki, as well as its secret sauce. For big eaters, they have all-you-can-eat okonomiyaki courses. The 90-minute lunch course (available from 11:00 am-3:00 pm) costs ¥1,060 on weekdays, and ¥1,200 on weekends. The 2-hour course includes okonomiyaki, 22 toppings, monjayaki, yakisoba, and yakiudon.

Only very recenly added to the Bib Gourmand list (the affordable level below a Michelin Star), this place looks pretty unnassuming, but the food definitely isn’t. Now with three restaurants in Hiroshima and two in Tokyo (the other in Kanda), they seem to be getting their staple dish right at this store in particular, so you’re in safe hands. Try to grab a counter seat by the teppan so you can watch the master at work.

This famous okonomiyaki restaurant in Osaka has two branches in Tokyo: one in Marunouchi and another in Shinagawa. Starting at ¥830 for a buta-tama (pork and egg) okonomiyaki, prices are quite reasonable. English menus are available too.

Because this restaurant is popular, it’s best to arrive early and expect a line that can leave you waiting for more than an hour, at worst.

Based in Asakusa, Sometaro has been in business since 1937. This grill-it-yourself okonomiyaki restaurant has affordable prices, with a very basic okonomiyaki (with only pickled ginger and cabbage as ingredients) costing ¥380. The ones with more fillings cost anywhere between ¥630–¥880. Be sure to try their unconventional okonomiyaki: pizza (with peppers, bacon, and cheese), curry, mochi (with cheese, bacon, and mochi), and pork with kimchi.

Another grill-your-own-okonomiyaki place, this place has all-you-can-eat and all-you-can drink courses. The lunch course is 90 minutes, and costs ¥1,480. The 2-hour all-you-can-eat-and-drink course costs ¥3,000, covering 18 kinds of okonomiyaki, 25 kinds of monjayaki, and a variety of alcoholic and non-alcoholic drinks.

This restaurant has an old-school, homey vibe. It serves not only okonomiyaki, but also monjayaki. Prices are slightly higher compared to the aforementioned restaurants, but are still relatively inexpensive.

One of the few Hiroshima-style okonomiyaki restaurants in Tokyo, Buchiumaya‘s best-sellers are the regular okonomiyaki — nikutama (meat and egg)—and mochi cheese nikutama. This izakaya-like restaurant also has other dishes worth trying, such as a crispy squid snack. Prepare to spend around ¥815 to ¥1,500 at this place.

Also in Shinjuku, the restaurant’s name needs no explanation. Its inexpensive okonomiyaki range from ¥600 to ¥900, and portions are large. The restaurant seems particularly generous with its noodles.