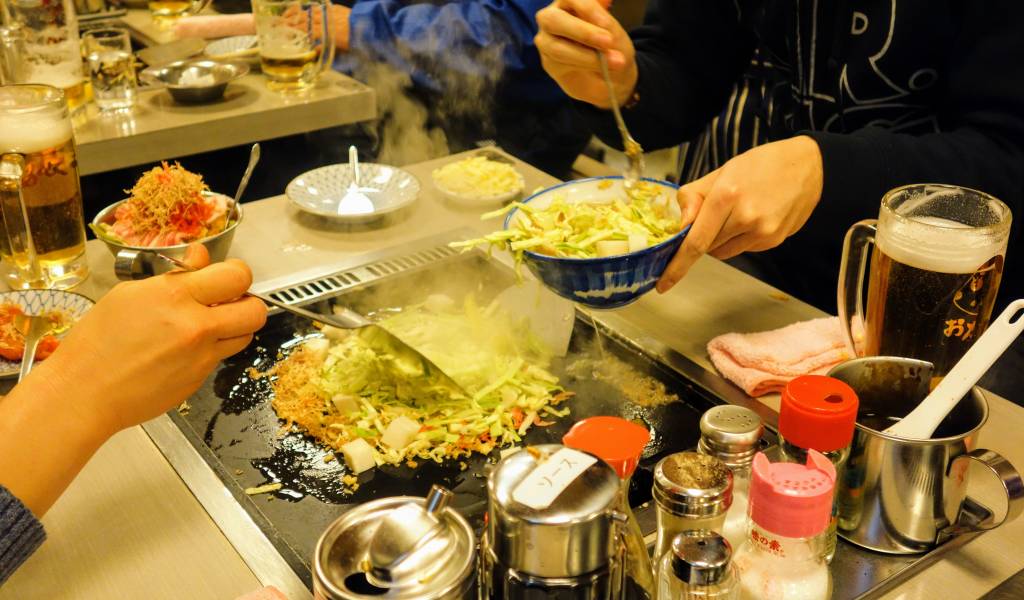 Most people are familiar with the old Kansai favorite okonomiyaki, but its Kanto cousin—monjayaki—is just as delicious, (albeit somewhat less photogenic). And there’s a whole street—Tsukushima Monja Street—dedicated to proving it!

Monjayaki is a liquid-y, hot, admittedly unattractive dish—but, once you get over looks and into substance, you’ll forgive its appearance and dive in. A thin batter made with flour and dashi (Japanese stock) forms the base, and with myriad combinations of toppings there’s something for everyone. If you’ve never tried it—either intentionally like me, or through not knowing it existed—there’s only one place to go in Tokyo, and it’s literally called Monja Street.

Ok, not actually literally, but almost—nicknamed Tsukushima Monja Street, this awning-covered section is located on Nishinakadori, and has over 75 dedicated restaurants all serving up the specialty on self-cook griddles. Filled with groups of pensioners at lunch time, school girls at dinnertime and then rowdy groups in the evening, it’s always busy—with an izakaya atmosphere that welcomes anyone and teaches them how to cook.

It is easy to find, you simply leave Tsukishima Station by Exit 7 and it is right in front of you. At night it is really pretty, with plenty of lights and inviting smells—all making it difficult to choose where to go! There are a few restaurants with English and this is signposted pretty clearly, so have a wander and see which one you like the look of. Some will have queues, especially in the evening, so keep an eye out for a name list to see how many you’re behind and make sure you get yourself on there! Most restaurants are also open during the day for lunch, so you will still have plenty to choose from.

You will have your own griddle and plenty of pots of sauces, spices and seaweed to add, as well as spatulas for cooking and eating. The general rule is that each person must order a dish, but that is an order we are very willing to follow. 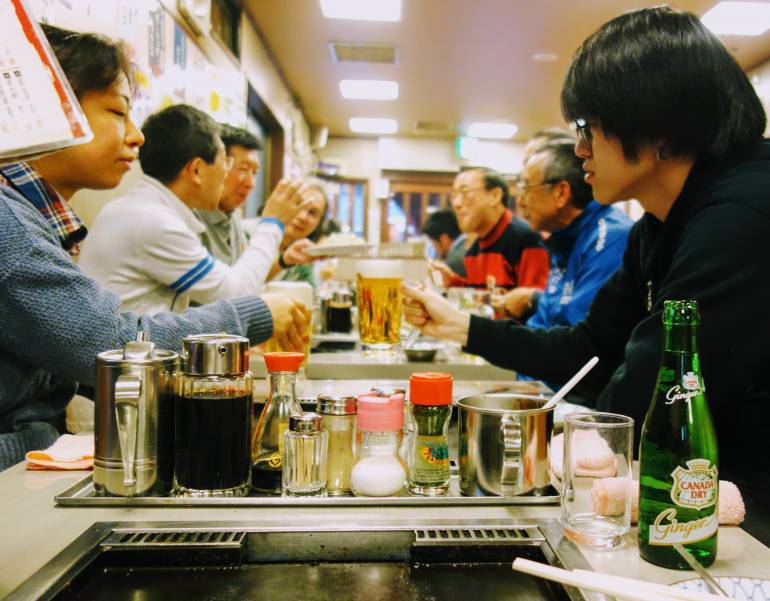 Since monjayaki is considered more of a snack or light meal, it is quite common to order it and then order okonomiyaki as well, or another grilled favorite, yakisoba which is definitely heartier. For science, we tried all three—and highly recommend you do the same. Each dish is about 700-1,200 yen depending on what toppings you go for and while you can eat two okonomiyaki servings on one griddle, monjayaki and yakisoba are a one-per-griddle affair. Here’s a run-down of what to expect, and how to cook each one:

Unable to suggest the dish without pulling a face, I know what you’re thinking, but read on. There are dozens of options, with plenty of meat, veg—often mentaiko and mochi is a popular choice, as well as the more unusual ones (how about crunchy ramen?). There are also often small descriptions to help you out too. Being the impressionable young lady I am, I chose eggplant and cheese, genuinely because it was described as “popular with younger women!” and I had a slight panic about whether or not I would still be considered ‘younger’. Decision made.

Apparently we gave off an air of cluelessness and had stared at the bowl for just long enough that the owner promptly began to cook it for us—oiling the hot griddle and tipping the solid ingredients onto it with all the confidence we lacked. She chopped them vigorously with the spatulas allowing them to cook a little.

Next, a donut shape was formed, and the liquid was poured into the center before being mixed in all together. After a little more prodding and mixing and what basically become playing with your food until it gets gloopy, you can tuck in. You can. I promise you can. Just don’t use chopsticks. There are tiny spatulas you use to pull off a piece and press it down onto the griddle so it sticks on—then eat. It will burn your mouth, but it’s addictive.

You can turn the griddle off and it will stay hot enough to keep it bubbling as you pick away at it. Once you begin eating, you will forget all about the similarities we are too polite to mention, and hopefully enjoy the meal.

A sturdier version of the above, the Kansai-based cabbage pancake has a thicker batter and more cabbage, and is pretty simple to cook.  All you do is mix the ingredients up in the always-slightly-too-small-bowl and tip them onto an oiled griddle, forming a thick pancake.

If you have meat, you may want to put it on the griddle first, then tip the stuff on top, so it looks good and the meat is crispy. When you see bubbles rising to the top, you are ready to flip—this is a challenge in itself, but good luck.

After a few more minutes on this side, you can begin with the final touches. Traditionally you add the sweet dark sauce with a brush, sprinkle on some green seaweed powder (aonori), mayo and some bonito flakes if you like, then dig in.

A popular festival dish, this is good if you need some bulk. There aren’t as many options, as it comes with cabbage and meat already, and is the simplest of the three to cook! We opted for the salt version, which is the sauce on the side. You basically tip the bowl onto the griddle and splash a fair bit if the water from the bottle along with it, and mix in the sauce until it looks ready to eat!

There is one further option, called teppanyaki. Here you choose the individual items and grill them without a batter or anything. This is tempting as there are lots of tasty choices like shitake mushrooms and butter, chorizo, sausages or beef steak—great if you want the protein or are gluten-free. Our neighbors were going straight in with whole grilled garlic cloves, so there’s no judgement here. Once you’ve eaten your fill, you can either enjoy the shaved ice desserts often offered (assuming this is to sooth burned tongues) or—if you’re a real convert—the sweet monjayaki available at some places.