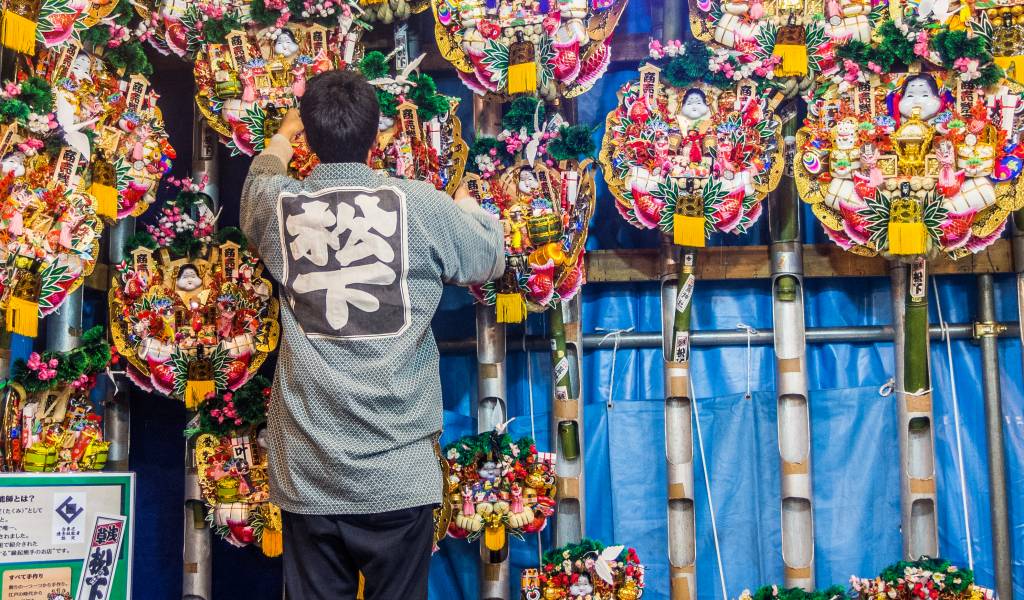 Tori no Ichi: Fresh Rakes! Get 'Em While They're Hot!

They are a huge deal for the local communities (attendance has to be seen to be believed: we are talking hundreds of thousands in one day) and their wares—in this case the ornamental rake/talisman called “kumade”—are treasured by both businesses and homes alike; still they are almost completely absent from tourist guides. And of course there’s little information available in English.

Like many other cultural things, Tori no Ichi (literally “the market of the bird”) goes back to the Edo period (1600-1868) and the rise of the merchant class. The people back then would take all the divine help they could get especially when it came to matters of the purse—and the temples and shrines would do everything they could to provide them with talismans that would serve this purpose.

The Ootori Jinja, which is dedicated to a god whose symbol is an eagle (Amenohiwashi no Mikoto, if you must know) claims that the mythical hero Yamato Takeru stopped there sometime 2000 years ago and dedicated his war-rake to the shrine’s eagle-god. The rake became its symbol, the pun between actual raking and “raking wealth” was too easy and a custom was created.

What really helped Tori no Ichi take off was the Ootori Jinja’s vicinity to the Yoshiwara, Edo’s adult entertainment district. As a rule, the courtesans of the Yoshiwara weren’t allowed to step out from its walls but during the two or three “days of the bird” (according to the old Chinese zodiac cycle, each month is divided in groups of 12 days and one of the animals/signs is a rooster; depending on the year there are two or three days of the bird/rooster—this year there are 2) they would go out and visit the market. Considering their status was similar to that of movie (or TV) stars today, it’s no wonder that people would crowd to even catch a glimpse of them.

The first Tori no Ichi for this year is on November 11 and the second (called Ni no Tori) falls on November 23. If you want to go for the classics, head for Asakusa’s Ootori Jinja (it’s a 15-to-20-minute walk from Asakusa proper) anytime from early in the morning until late at night (it used to be that the market was held from midnight to midnight but modern lifestyle has changed things, so now they wrap it up around 2 AM) and let yourself sink in the colors, the  countless charms decorating the kumade, the sounds from the sellers and the smells from the hundreds of food stalls in the streets surrounding the shrine.

Like all folk events, there are many intricacies in Tori no Ichi; each and every object decorating the kumade has its own significance—for example the “tai” sea bream (a type of fish) is used because it brings to mind the word “medetai” (or auspicious), and the “masu” sake cup measure is divided in half because that way it becomes “masu-masu” or “more and more” (it’s also read as “hanjo” which written in different characters it means “prosperity”).

Also there is a small ceremony when the customer leaves with their new kumade: buyers and sellers make a circle and perform together a “sanbon-jime” (“triple closure/bind”) clapping and shouting to transfer the good fortune to the kumade’s new owner.

I wouldn’t call visiting Tori no Ichi (I’m only familiar with the one in Ootori Jinja but I bet the other ones aren’t that different) a “life-changing experience”, but it certainly is a fun way to end your visit to Asakusa and it can offer you a glimpse into the past. Not many things have changed in the way the fair is held since the Edo times, you’ll get to see a very different side of the Japanese and you might even end up with a unique souvenir (prices for the kumade start at the 1,000 yen mark and can climb up to the hundreds of thousands).

One last note: don’t get overwhelmed by the enormous lines starting several blocks before the shrine. These are people waiting to pray at the shrine—you can bypass them and enter the shrine’s grounds (and the kumade market) from the side streets.