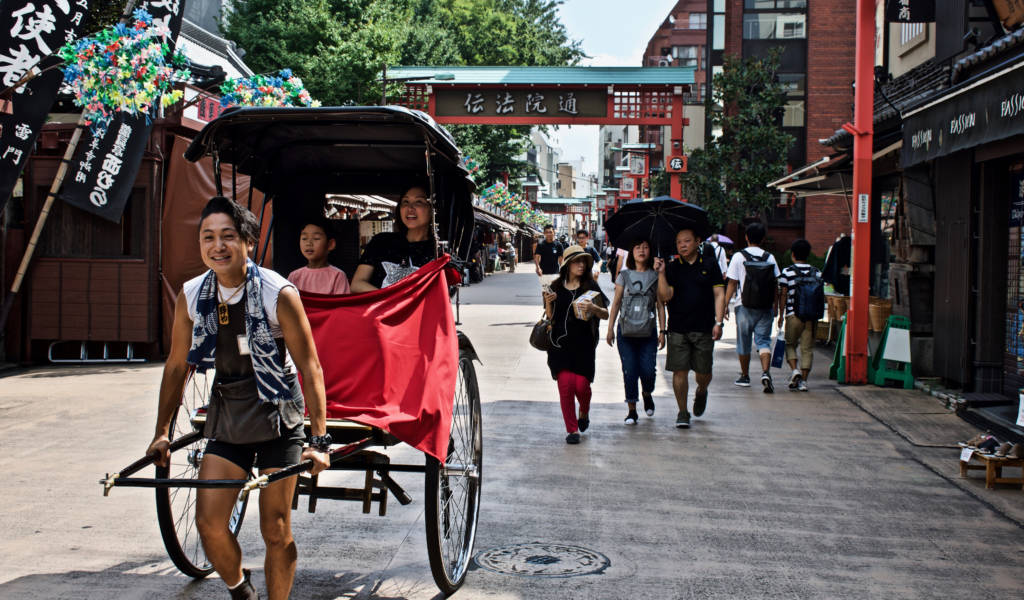 There’s no shortage of transportation options in Tokyo. With a massive train network, buses, and taxis, all bases are covered. Plus, exploring Tokyo on foot or by bike is a fun way to combine sightseeing with exercise. But for a trip to remember, consider taking a rickshaw ride—with scenic views, friendly guides, and an unconventional mode of transportation, it’ll definitely make for a unique experience!

Rickshaws and where to find them in Tokyo

The term “rickshaw” is, essentially, an anglicized version of jinrikisha, the Japanese word for this human-powered carriage. Although it’s difficult to pinpoint who actually invented it and when, most sources say that a certain Yosuke Izumi invented the rickshaw in Tokyo in 1869.

Rickshaws became so popular that they spread to neighboring Asian countries. Contrary to misconception, these sleek wooden carriages were not just for the nobility. In fact, for decades, rickshaws were Japan’s main mode of transportation because they were cheaper than horse-drawn carriages and cars.

Nowadays, the word “rickshaw” refers not only to the traditional human-powered carriage, but also to any other carriages similar in appearance, be they electric or motorized. Some of those rickshaws are more commonly known by other names like “pedicab” though, so note that all mentions of rickshaws from hereon are referring to those pulled by humans.

With technology marching on, today, Japan has far more efficient modes of transportation than rickshaws, of course. Still, there are a handful of operators that offer rickshaw rides to tourists—or, really, anyone looking for an extraordinary experience. At popular tourist areas with a traditional Japanese vibe, expect to find rickshaw drivers offering their services. In Tokyo, drivers gather in the traditional neighborhood of Asakusa.

What to expect on a ride

To take a rickshaw tour, advance booking is not required. You can just walk up to a driver and ask to be toured around. If you’re planning to take a long ride, though, it’s best to make a reservation. Some companies even offer the option of customizing your pick-up point (only within Asakusa, of course) when making your reservation.

Tip: Go full-on traditional and rent a kimono for your unique journey around Asakusa. Makes for a great photo-op too!

Depending on the plans offered by the operator, a rickshaw ride can be as short as 10 minutes (which usually costs 3,000 yen per person), or even as long as three hours. Ten to 15 minutes is just enough time to take you around a block, while 30 minutes should be good enough for a quick tour around a neighborhood.

Note that many (but not all) operators do not charge for children under age 6 that can be seated on a parent’s lap. Rickshaw operators are typically able to accommodate wheelchair users as well, but it’s best to inquire in advance.

Don’t worry about rain and snow. Rickshaws have covers to keep you dry! (Naturally, don’t expect rickshaws to be in service in the event of terrible weather.)

You can ride with your bags in tow, but if your luggage is deemed too large, you might have to leave it at the operator’s office.

Your friendly driver will also double as your guide, explaining attractions as you pass by them. (Not all drivers can speak English, though, and their level of fluency may vary. To ensure that you’ll get an English-speaking driver, contact the operator in advance.) The driver will occasionally stop for photo ops, so feel free to ask for help taking photos.

Tours can be customized to an extent, so if you specifically want to check out a certain part of Asakusa, or if you want to end at a specific spot instead of doing a round trip, let the driver know.

If you’re ready to take a rickshaw tour, take your pick from these companies, all of which are known for offering quality service.

Asakusa’s longest-running rickshaw operator, Jidaiya aims to provide memorable, once-in-a-lifetime experiences. It has an air-conditioned waiting room close to Sensoji Temple’s Kaminarimon Gate, and it gives freebies to all customers: postcards for short courses, and fancier freebies for those who book longer, pricier courses.

Jidaiya also offers a range of other cultural experiences that, for an additional fee, you can combine with your rickshaw tour. One recommended activity is kimono-wearing. If you’re going to travel the old-school way, you might as well look the part, after all!

Asakusa
Written by: Tiffany
Filed under: Getting around | Things to do
Tags:
Sharing
Questions or comments about this article?
Start a thread on our community forum
Ask our local experts about Tokyo