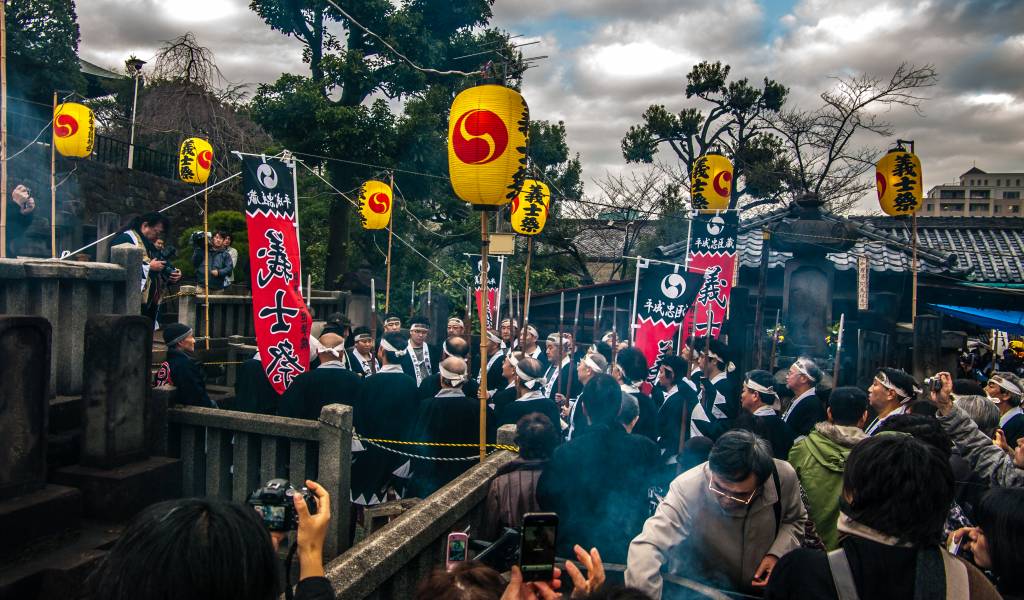 As if in the blink of an eye, 2019 is coming to a close. Before the year ends, though, here are some festivities that might help you end your year on a good note.

And these aren’t the only events worth checking out, as winter illuminations and Christmas markets are very much a thing in Tokyo in December. Look out as well for New Year countdown events in our NYE guide. Or, consider ending the year with a wild night at Tokyo Fight Club, or a more sedate countdown cruise around Tokyo Bay. Explore those and other NYE events.

Also known as the 47 Ronin Festival and the Ako Gishi-sai, this event commemorates the 47 loyal samurai who avenged their fallen lord by killing his enemy, after which they committed ritual suicide—the stuff of numerous works of fiction.

The date of this event is always fixed at December 14th, the day that these samurai raided their enemy’s mansion. On this day, the Gishi-sai begins with a memorial service and a tea offering to the gods, after which locals dressed as the 47 samurai depart from the Sengakuji Temple and make a solemn procession around the area. The memorial and tea offering start at 11 am and 12 pm, respectively, and the procession ends—again, in the temple grounds—between 3 pm and 3:30 pm.

Learn more about this event with a handy write-up by fellow cheapo Grigoris.

To say that the Setagaya Boroichi is a long-running tradition is an understatement. Just to give you an idea of how long it’s been, well…it’s been going on for nearly 450 years now! It started out as a flea market for scraps of clothing, but now, you’ll see everything under the sun on sale, from antiques to handicrafts to toys. With over 700 vendors and an estimated 200,000 visitors per day, this huge (and jam-packed) flea market spans the entire stretch of Boroichi-dori—so if you’re a bargain hunter, prepare yourself (and your wallet) for a long day. Be there early if you want to get good bargains; we’re not kidding when we say that you can get some items at dirt-cheap prices. For instance, you can get lovely kimono for as low as ¥500.

If you plan to spend the entire day hunting for treasures at the Boroichi, don’t worry about food, as you can take your pick from the numerous food stalls in the area. We recommend trying daikan-mochi, a kind of rice cake that’s regarded as the event’s “official” specialty food.

Hagoita are wooden paddles that are used to play hanetsuki, a Japanese badminton-like game. Over time, they became regarded as an auspicious symbol—they’re used for hitting, after all, so maybe they could “hit” bad luck as well; get it? Thus, at Sensoji’s hagoita market, of which—just like with the first two events—the dates are fixed annually, you’ll see elaborate, purely ornamental hagoita, which are meant to welcome good luck and drive away bad luck.

While you can find smaller and simpler ones for reasonable prices, the large ones with several ornate details can reach six-digit prices. They can make for beautiful souvenirs, and it wouldn’t hurt to stock up on supposedly lucky items for the upcoming year. But even if you don’t intend on buying anything, it’s worth a visit to marvel at the beautiful hagoita on display.

For those who want to take in the ambiance of a Japanese festival, this would be a good choice, as it’ll have not only hagoita, but also food stalls—’cause hey, gotta provide some grub for visitors and vendors alike.

If you’re into Japanese pop culture, comics and cosplay, be sure not to miss Winter Comiket, the major geeky year-ender. This event draws tons of doujinshi (fan-made comics) collectors, cosplayers, and photographers every year, so be prepared for crowds and queues galore (yes, even to take photos of the more popular cosplayers).

While this year’s summer and winter Comikets are four days long, note that, unlike in previous years, admission is required as a crowd-control measure. With part of Tokyo Big Sight closed in preparation for the Olympics, the venue simply cannot accommodate as many people as in previous years.

Wristbands that serve as proof of entry can be purchased at otaku-oriented shops like Animate for ¥540 per day. Alternatively, you can buy the catalog for ¥2,500, which includes wristbands for all four days. These will also be sold on-site for ¥500 per day (for the wristband) and ¥2,000 (for the catalog and four days’ worth of wristbands). But, while this option is slightly cheaper, there’s also the possibility of on-site wristbands and catalogs not being sold at all. If you definitely want to attend Comiket, it’s best to buy in advance.

If there’s anything you want to buy, arrive early and be sure to know what you want and which booths to visit beforehand, which you can do by buying the aforementioned catalog). This event is so huge that it’s impossible to check out everything from booth to booth.

If you plan to cosplay and make the most of your day (time can pass very quickly at Comiket!), arrive early and prepare to pay ¥800 as a cosplay registration fee. (And read our guide to cosplaying at Comiket to learn about Japanese cosplay event etiquette and what to expect.)

Now here’s an interesting and fun way to celebrate the New Year! According to legends, foxes would dress as humans and visit Oji Shrine on New Year’s Eve. The tables have turned—it’s the humans’ turn to dress up as foxes, as the residents of Oji welcome the New Year by holding a parade that anyone in traditional Japanese attire plus anything fox-related (e.g. a mask, fox ears, fox makeup) can join.

Pre-registration is required to join the parade, though, so check their website (Japanese only), as registration starts in late November. The parade will make its way to Oji Inari Shrine, where there will be a service held for the New Year. In addition to the parade, you can have your face painted for a fee, shop for masks and other fox-themed goodies, and keep yourself warm with some food and drink.

The Chichibu Night Festival (or Chichibu Yomatsuri in Japanese) is touted as a must-see because it’s one of Japan’s three greatest float festivals and a major night festival. Saitama Prefecture’s Chichibu is 1.5–2 hours away from Tokyo, which can make getting home inconvenient (especially if you plan to stay until the end), but if you can make it, you’ll see that it’s worth the long travel time.

The highlight of the festival—the dates of which are fixed annually—is a parade of majestic floats, all decked out with attractive, fancy decor, but it’s also known for its fireworks, since fireworks in winter are rare in Japan (loud New Year celebrations aren’t a thing). The main parade will be held on the 3rd, but you’ll still be able to see the floats on the 2nd. This being a night festival, nighttime is when things heat up, but if you don’t have time to stay late, you can still see the floats and other side activities/performances in daytime.

3rd Dec, 2021
Free
Read more
Asakusa Makuhari Odaiba Oji Sengakuji
Written by: Tiffany
Filed under: Events | Things to do
Tags:
Sharing
Questions or comments about this article?
Start a thread on our community forum
Ask our local experts about Tokyo