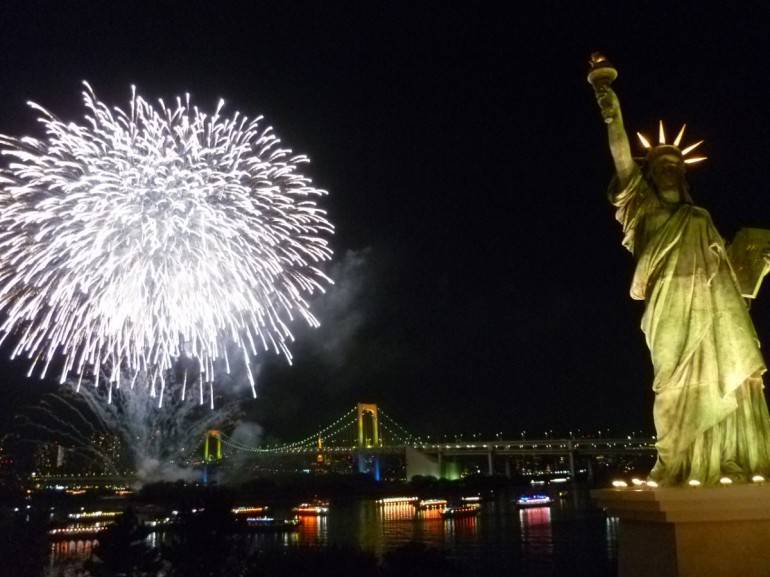 The view from the boardwalk outside the Decks shopping mall in Odaiba seems to have it all.

So what more could a cheapo couple on their first date ask for?  Well, how about a free fireworks display from a nearby island erupting over the bay, because that’s what’s happening every Saturday night from now until New Year!

And it’s a surprisingly impressive show too. Not overly long and with no breaks, this display starts with a bang, burns brightly and climaxes quickly. An experience the teenage couples watching may sympathise with later on in the evening.

The girl next to us certainly enjoyed it, exclaiming kirei (beautiful) or kawaii (cute) after every single bang. Literally every single one – and I mean literally here in the old fashioned sense where the statement that follows is true rather than the modern sense where the statement that follows is false eg “I literally died”. Someone really needs to rewrite the definition for that word. Quite what differentiated the kawaii explosions from the kirei ones was beyond us, but she provided great entertainment for those around her and at least had the humility to admit to her friend at one point, watashi wa urusai, ne (I’m really noisy, aren’t I?)

Anyway, other than the fireworks display, the area around the Decks mall features a host of alternatives for the pleasure seeking cheapo.

Escape Tokyo for the day, see mountains, hot springs, the modern, the traditional, the old and the ancient!

There’s the giant Gundam figure currently standing somewhat incongruously in a winter wonderland grove of LED covered trees, and performers are out in force on the boardwalk – we saw a couple of gymnasts, a monkey show and three Power Rangers. Also, if you steer clear of the sit down restaurants, the surrounding malls have their own share of cheap and interesting eateries to find and, even without buying anything, exploring their very random floors can be an experience in itself.

Cheapos interested in experiencing Sega’s Joypolis (located inside Decks) might want to stick around too since buying a night passport (available after 20:00 on weekends) knocks 1,500yen off the normal entry price of 3,900yen and still gives you three full hours of enjoyment.

For everyone else though, the only expense is the Yurikamome ticket out there. And since you can board the train at Shiodome, where they have their own winter illuminations, it makes the ride all the more worth it.

Written by: Richard James
Filed under: Lifestyle, Things to do
Comments or questions? Start a thread on our community forum

Watch this next
More Videos

There are certain times in the year that can make your visit to Tokyo less than idea.

Popular Posts From The Cheapo Network