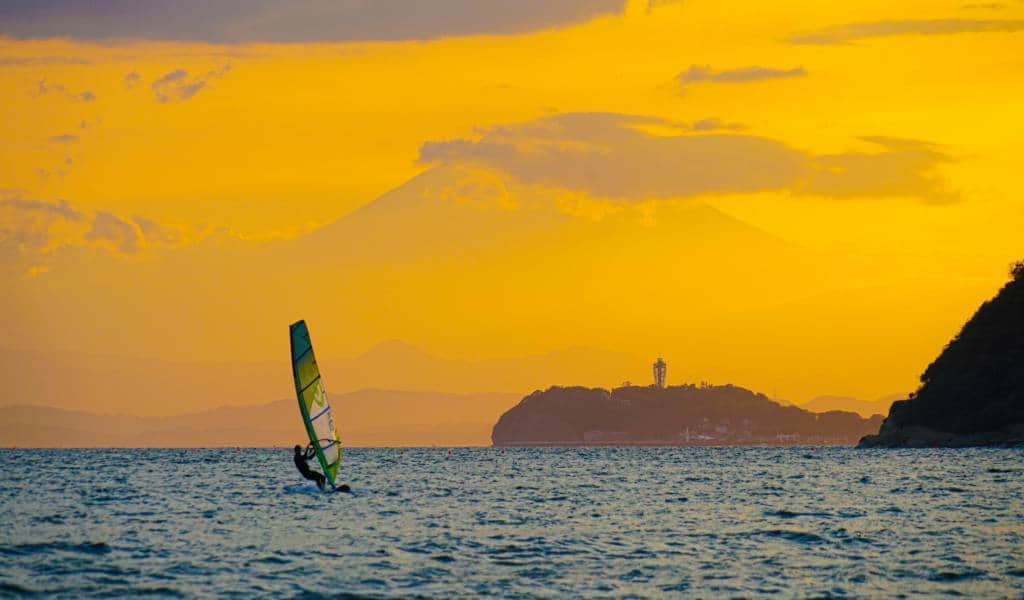 With summer and hot, sunny weather right around the corner, why not make an escape from the hustle and bustle of Tokyo to the sandy, beachy island of Enoshima.

Enoshima, a small island just slightly west of Kamakura, boasts some of the closest beaches to Tokyo (approx. 1 hr from Shinjuku Station). But that’s not the only enticing factor; Enoshima’s got a little bit of everything—parks, shrines, aquariums, local restaurants and even caves—making it the perfect all-in-one vacation spot.

Thanks to a linking bridge, Enoshima Island can easily be accessed by train. Our cheapo transport recommendation is taking the Odakyu Line from Shinjuku Station to Fujisawa Station, then transfering to the Odakyu Enoshima Line and getting off at Katase-Enoshima Station (the closest station to the main beach area – 630 yen one-way). Or you can take the Odakyu Romance Car from Shinjuku Station that’ll bring you directly to Katase-Enoshima Station without transfer, but seeing as it’s 1,250 yen one-way, we can’t really recommend it in good cheapo taste.

Although not the most stunning ones in Japan, Enoshima beaches are the closest to Tokyo. But if you want to play in the waves, get some sun, play beach volleyball, or just chill outside, this is where you want to be. The island also has an annual fireworks festival, where over 3,000 fireworks are displayed (held usually in October).

Non-beach-goers still have plenty of things to do if visiting the island. It’s a great place to learn about snippets of Japanese history, culture, and mythology.

Enoshima Benten Shrine: There are several shrines around the island dedicated to Benten, the island’s patron goddess of good fortune, wealth, music, and knowledge. Admission to the main shrine is free, but it might be worth the 150 yen to see the Benten statue—as she is the goddess of wealth, it is said that if you wash your money there and spend it, then the money will come back to you two-fold.

Love Bell: For a more romantic element, head off with your partner to Koibito no Oka, or Love Bell, where there is a great view of Sagami Bay. There are numerous (which is an understatement) padlocks on the cliff side. This is similar to Seoul’s Namsan Tower’s Locks of Love, wherein couples write their names on padlocks and hang them to symbolize their love that lasts for eternity. In Koibito no Oka, if a couple rings the bell together first and then put their names on padlocks and hang them, then it’s said that they will be together forever.

Temples: Temple trekkers should make their way to the Enoshima Daishi or Ryukoji Temple. While both are Buddhist, the former is newly constructed and boasts more modern architecture  (with kickass Fudo Myo-o statues at the entrance), while the latter is your traditional-style Buddhist temple.

Enospa: There’s nothing like coupling the day at the beach with a spa visit. Head to the highly popular Enoshima Island Spa, which rests on the sea’s edge and offers onsen and pools with a view of Mt.Fuji. Note, though, that this is not exactly a cheapo option since the general spa admission is 2,400 yen, plus an extra 500 yen on weekends and national holidays during the months of July and August.

Enoshima Aquarium: At the time of writing, the aquarium has several exhibits including the Sagami Bay Zone, Jellyfish Fantasy Hall, Sea Turtle Beach and a dolphin show. General admission (adult): 2,100 yen, but there is a discount for those who purchased the Enoshima-Kamakura Free Pass. The aquarium does a great job at showcasing local marine fauna of Japan, but maybe skip the dolphin show for ethical reasons.

Iwaya Caves: Of whimsical importance are the Iwaya Caves, fashioned by water erosion, and accessible by a flight of stone steps. A hot spot for tourists, the caves are open from 9:00 am to 5:00 pm from March to October and 9:00 am to 4:00 pm during the remaining months of the year (November-February). Admission is 500 yen.

For those who are confident in their Japanese skills, check out the recommended day-courses for Enoshima here. The site recommends the Family course, Couple course and Historical course (thank goodness for knowing Katakana!).

We highly recommend just bringing your own food and having a picnic on the island (one of our cheapo beach tips) instead of dishing out to dine out. Though, if you must dabble in the local cuisine, shirasudon is the choice—a dish made of shirasu (tiny, white fish) caught fresh in Sagami Bay and eaten raw or cooked on top of a rice bowl.

Enoshima
Written by: Mei-chan
Filed under: Lifestyle | Outdoors and Nature
Tags:
Sharing
Questions or comments about this article?
Start a thread on our community forum
Ask our local experts about Tokyo