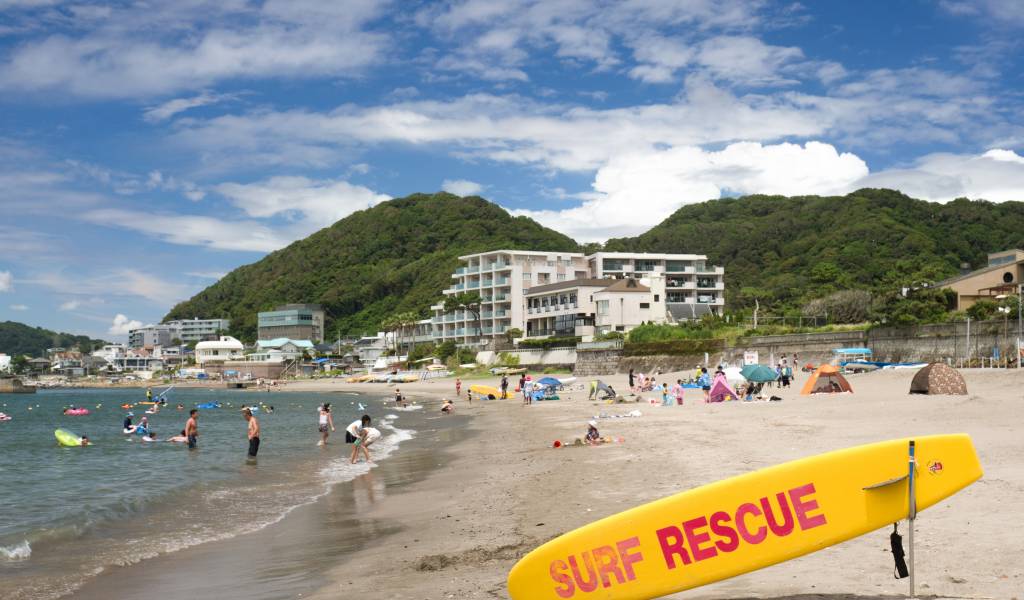 As a reward for scrimping and saving, every good cheapo deserves a beach break once in a while, and the Tokyo area has plenty of suitable options for just that. Donut-float-and-sandal-clad cheapos can find themselves at one of Tokyo’s nearest beaches in just over an hour ride on the train. The closest beaches of note to Tokyo are Zushi (and Hayama), Enoshima, Kamakura and Miurakaigan.

Tip #1 Buy provisions away from the beach

Quite predictably, prices for provisions from the cafes and bars on the beach are usually not so cheapo friendly. While none are luxuriously expensive, you’re still likely to pay 1,000 yen for a fairly average lunch. You can save your hard-earned yen and pick up a bento on the way. In Zushi, there’s plenty of choices on the walk from the station to the beach—but of course the spendthrift within you knows it’s probably best to pick something up before you set off from Tokyo (bonus cheapo points if you make it a half-price bento) Quite often you’ll see people doing a BBQ on the beach. This is a good cheapo idea, both in terms of saving costs by bringing your own food, plus the not having to pay prohibitive fees just to light the coals (as is often the case in the BBQ-able parks around Tokyo).

Tip #2 Getting there – pick your trains carefully

Depending on which route you take to the beach, you could easily end up paying an extra 600 yen. Avoid the JR Shonan Shinjuku Line, sure it’s 10 minutes faster but will cost you an extra 50% over the Tokyu Line option listed below. Here are routes to the four beaches (see Tip #4 for bus instructions from Zushi -> Hayama)

Despite the 25-35 degree Celsius temperatures running all the way from May to October it seems that summer (un?)officially starts mid-July and ends on the last day of August. And consequently hardly anyone goes to the beach outside the mid-July to end of August period! Every year my mind is always blown as to the stark contrast between the last weekend in August and the first weekend in September—August utterly rammed, September a sparse sprinkling of beach goers, yet the weather is exactly the same. And the same goes for April, May and June (before summer has officially started). I gather “umi no hi” (Marine Day, the third Monday in July) usually marks the start of the summer (and the end of the rainy season), but I urge you to pay no heed to dates or customs and just go to the beach when the weather and mood suits. After August and before July, you’ll basically have the place to yourself.

Tip #4 Hayama is the nicest beach

Enoshima and Zushi get ridiculously crowded on the weekends, even the weekdays are pretty rammed. It’s worth taking the extra 20 minutes to take the bus from Zushi to Hayama, where you can actually see some of the sand between the sun-bathing bodies, it is far more secluded, there’s shady trees, and *gasp* actually some grass areas too. Even the Emperor has a beach-side residence there. To get to Hayama from Zushi Station, take bus 12 (from bus stop 3) heading to Hayama (葉山), get off at at Isshikikaigan, (一色海岸) just before Hayama, and then you walk through some narrow lanes down to the beach. Second choice for me would be Kamakura. While the beach itself is fairly standard, it makes a great day out if you combine beach with a visit to some of the Kamakura ‘sights’ and surrounding hills. Apart from these top two choices, Zushi is probably next choice for me, Enoshima has an interesting island (which you can read about here), but the beach experience isn’t that nice. And Miurakaigan makes a less-crowded alternative (plus it’s a spot for kite-surfing). And don’t forget to wear sunscreen!

This article was first published in July 2012 and updated in June 2016.
Written by: Chris Kirkland
Chris's Tokyo favorites are: Tomoe Sushi, Borne, Udagawa Cafe Suite
Filed under: Getting around | Holidays | Outdoors | Things to do
Tags:
Sharing
Questions or comments about this article?
Start a thread on our community forum
Ask our local experts about Tokyo