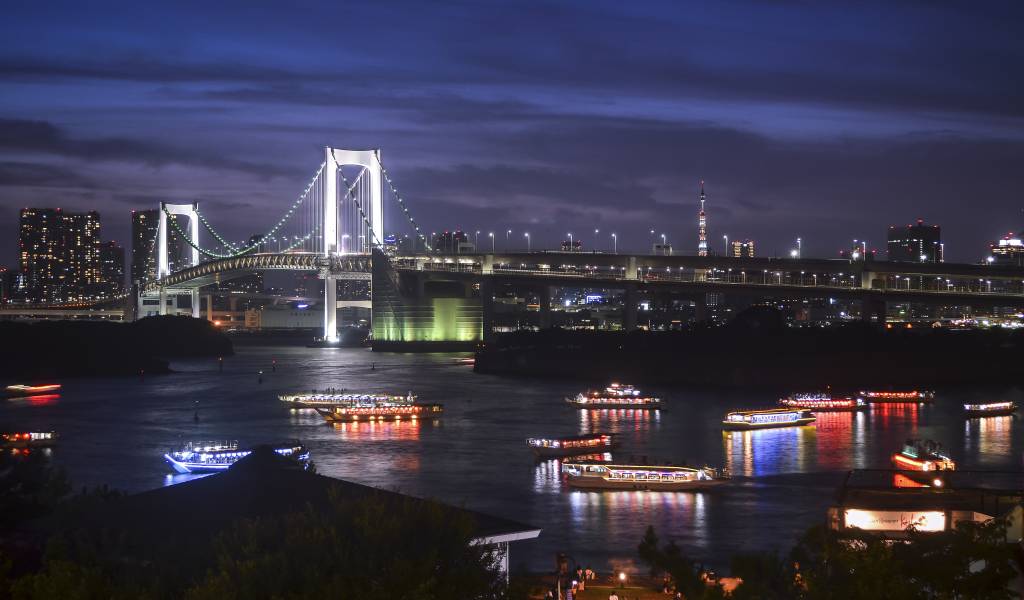 Top Things to Do in Odaiba

Odaiba — an artificial island situated in Tokyo Bay — is a must-see area for visitors to Tokyo. In the 90s that most of this area was developed and proves a fascinating demonstration of urban planning, with large buildings and wide streets. Some of the major highlights in Odaiba include its picturesque waterfront, the impressive Statue of Liberty replica and the photogenic Rainbow Bridge. The area is also chock full of shopping and amusement options, so you won’t run out of things to do anytime soon, we promise!

1. The journey is half the fun

Make the trip to Odaiba more interesting and opt for the driverless Yurikamome train to get there. The train leaves from Shinbashi Station and races past skyscrapers before going over the famous Rainbow Bridge. If you want the very best views though, you’ll have to fight densha otaku (train geeks), couples on dates and small children for the front facing seat at the very front of the train.

This park gives you one the best views of the city, with its impressive promenades and elevated pathways. It is free to enter at any time, but make sure you come here at nighttime for a twinkling view of the city and to see those old-fashioned yakatabune (low-slung wooden boats) in action and decorated with lanterns. Here you can also find a man-made beach that is 1/2 a mile long – but it’s not for swimming – and that well-known Statue of Liberty replica.

If you want to ride on a yakatabune, why not check out this night cruise around Tokyo Bay.

This free show is a must for Gundam fans old and young alike, but still fun for those with no familiarity with the franchise. The Gundam show happens at 11am, 1pm, 3pm and 5pm during the day, with evening shows every 30 minutes from 7pm to 9:30pm. During the shows the Gundam lights up – but doesn’t move – and scenes from the anime are projected onto a screen behind it. There are different songs and scenes used, so if you’re a fan check the schedule so you can catch your favorite song. If by the end of the show you haven’t had your Gundam fill, head inside Diver City to The Gundam Base and stock up on all the Gundam figures you’ve ever wanted.

4. Get out of your comfort zone

Now in Odaiba, there’s more than one way to do that. Get your scare on at Daiba Mysterious School, or loiter in the uncanny valley of Madame Tussauds. Maybe you don’t like gross things like poop? Then the Unko Museum might change your mind. You can play mind games at Tokyo Trick Art Museum. Or channel your inner ninja warrior at Ninja Park in Aqua City- be warned though, this one really is a challenge. You might not be able to complete any obstacles at all, no worries though the trampolines are still fun.

5. Head to a museum and learn something new

Odaiba has a small but impressive selection of museums in the area. Of course, the most well-known is undoubtedly Miraikan – The National Museum of Emerging Science and Innovation. This place is a popular destination for school excursions, but many of the exhibits can be enjoyed by adults too. If you’re into ships, the Museum of Maritime Science is place for you, and if you’re not, well it’s still cool to look at because it’s shaped like a big ship. There’s also the free exhibition hall, Tokyo Robot Center Showroom for the tech-heads, and – if you want to stretch the definition of museum – Odaiba Takoyaki Museum, a restaurant where you can sample different kinds of takoyaki (fried octopus balls).

On a clear night, it’s worth sticking around to watch the sunset over the city. You’ll also be able to watch the Rainbow Bridge light up, and depending on the time of year you might be able to catch a special light display or firework show. You can easily watch the sunset for free from any of the walkways facing towards the city, but for a good date night option we recommend heading to one of the restaurants inside Aqua City and requesting a window seat.

Odaiba has some surprisingly nice green spaces for such a commercial area. In addition to Odaiba Marine Park mentioned earlier, Symbol Promenade Park’s garden close to Tokyo Teleport Station is a well tended and pretty garden that’s always full of flowers (and people doing photoshoots with their dogs). Not to mention Odaiba is a surprisingly good spot to catch seasonal flowers – hydrangeas in summer, gingko leaves in fall and cherry blossoms in spring. Green spaces extend most of the way around the edge of the island too, making it a nice place for a picnic or bbq.

8. Shop til you drop

We’d be remiss to not tell you to do this. It’s one of the main things Odaiba is known for, afterall. You’ve got three big malls to choose from, each with a healthy mix of Japanese and foreign brands at various price points. You’ll find mostly fashion and accessories in all three, with not much to difference between them in terms of style so go whereever strikes your fancy. Or go to all three, we won’t judge you.

The Unicoern Gundam isn’t the only pop culture icon you can find in the area. There is a Doraemon statue on the other side of Diver City that is super popular with young children and families. Plus, inside the malls, you’ll find a plenty of character and franchise stores like a Jump Store, Disney Store and Hello Kitty shop. Oh, and did we mention the pop culture festivals and concerts? Odaiba is the venue for super popular festivals like the Tokyo Idol Festival and Comiket, as well as regular concernts and idol events.

This huge sphere is hard to miss, especially if you ride the Yurikamome into Odaiba. It’s part of Fuji Television Building and for ¥700 you can go inside and enjoy panoramic views of both the city and Tokyo Bay. On a clear day you can even see Mt Fuji. Other parts of the building are also open to the public so you can see exhibits including displays and props from various tv shows.

Want to get a feel for what Japan might have been like 60 years ago? Then Daiba 1-chome Shoutengai is the place for you. This slightly tacky but weirdly fun themepark like area is located on the 4th floor of the Seaside Mall part of Decks shopping mall. It’s full of retro vibes, with old style arcade games, candy shops and carnival games. You can get a cartoon sketch of yourself done and your fortune told, and – this wouldn’t be Odaiba without retail therapy – pick up some novelty toys for good measure.

While we do our best to ensure it’s correct, information is subject to change. Last updated in August 2022 by Maria Danuco.

Odaiba
Written by: Zara Sekhavati
Filed under: Things to do
Tags:
Sharing
Questions or comments about this article?
Start a thread on our community forum
Ask our local experts about Tokyo