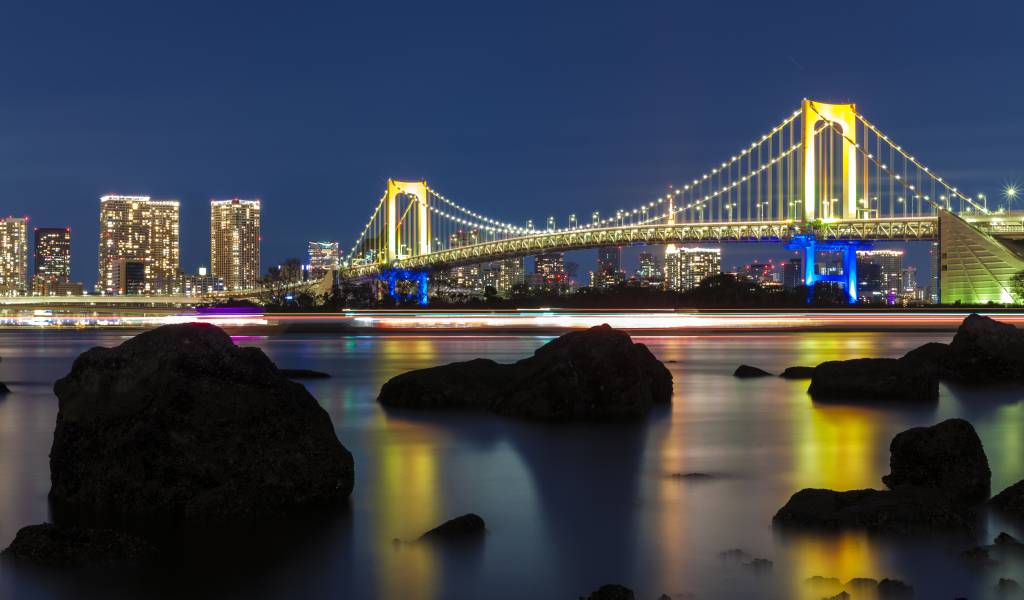 If you’re a newcomer to Tokyo and you’ve taken the bus from Narita Airport, it’s likely that one of your first impressions of Tokyo was the glittering view of skyscrapers glimpsed while crossing the iconic Rainbow Bridge. While the bridge carries plenty of road traffic and the Yurikamome Line, it’s also a pedestrian bridge with pathways (officially the ‘Rainbow Promenade’) on both the north and south sides of the bridge.

Crossing the bridge on foot takes about 25 minutes and is free. To walk the bridge, you can start at either the Tokyo or Odaiba end. For convenience’s sake we recommend doing a loop starting and finishing on the Tokyo side of the bridge. Or you can ride the Yurikamome Line over to Odaiba and enjoy the view, then walk across Rainbow Bridge back to Tokyo.

If you’re starting on the Tokyo side, find your way to the visitor center. On entering, the first decision you have to make is whether to take the north or the south route — there are separate elevators for each. The north route will give you views of Tokyo Tower, the skyscrapers around Roppongi and Toranomon, the Shiodome area and Toyosu. The south route affords views of Odaiba including the adjacent islands as well as the Shinagawa area.

On the other hand, there’s no visitor center on the Odaiba side. And, there’s no elevator either. Instead you walk up a long sloping path until you reach the bridge. It’s not particularly steep though, so you’ll barely work up a sweat.

The views from both sides are impressive, so if you’re after some nice photos consider the lighting. Odaiba looks amazing at dusk, so you could take the south route just before sunset and then get those city lights from the north route on your return journey.

The bridge is an easy walk, but consider you’ll have cars and trucks rumbling past right next to the walkway. If you’re sensitive to some exhaust fumes you might want to give the walk a miss. You can also take your bicycle over the bridge, but you have to walk it over — they’ll even give you a trolley to stop you from cheating! The only other restriction is pets, so leave Shiro at home.

Note: When there are strong winds, the walkways may be closed. The walkways are also routinely closed on the third Monday of the month.

On the Odaiba side, the closest station is Odaiba-kaihinkōen on the Yurikamome Line or Tokyo Teleport on the Rinkai Line.

While we do our best to ensure it’s correct, information is subject to change. Last updated in November 2022 by Maria Danuco.