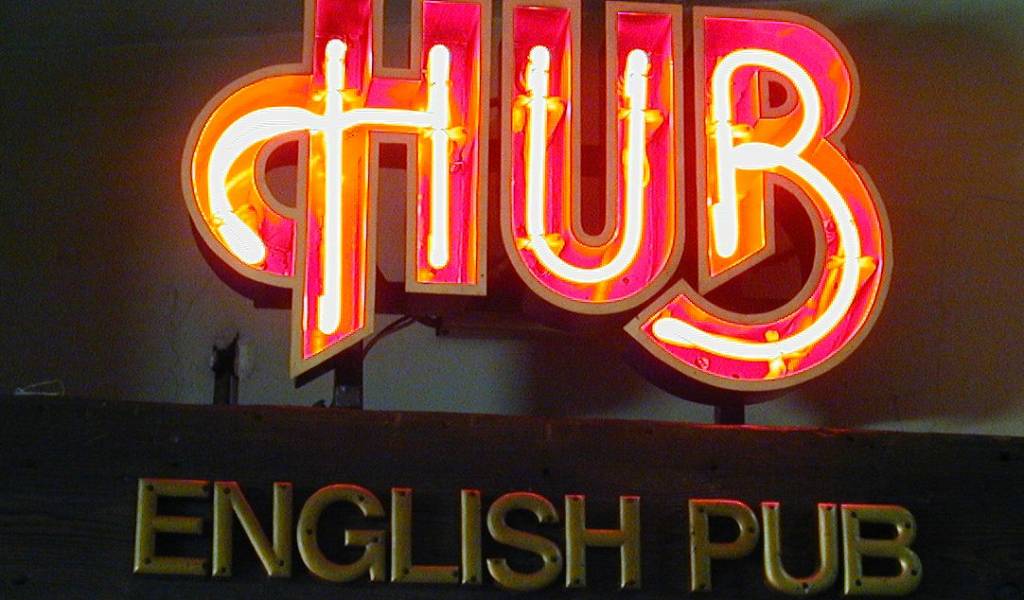 Bars Without Bite: Cheap Places to Drink in Tokyo

If you’re out in the capital and want to do a little drinking, things can get pricey. The average for a drink is around 800 yen, which quickly adds up. Luckily, we know some cheap bars in Tokyo where a budget isn’t a problem…

Izakaya may be a great way to make the most of all you can drinks offers, as are international parties and clubs. But, if you want a chat with your peeps, avoid pressure to buy food or drink yourself stupid, and maybe want to meet some new friends—you can’t beat a standard dive bar. Before you get drinking though, you may want to check out what you can try, and some of the drinking rules and remedies in Japan. Tokyo has plenty of great spots to choose from, so here are some good places to start your night:

This place has one of the best happy hours in town—who can argue with a 200-yen Moscow Mule, a 300-yen beer or a 400-yen mojito? Certainly not us. Located around the corner from Midtown in Roppongi, Havana Cafe has a very happy hour between 4pm and 7pm Monday to Saturday, and is a great place to kick off your night. Regular drinks are around 700 yen for cocktails, 600 for beer and they have a good selection of more unusual Caribbean-themed drinks. 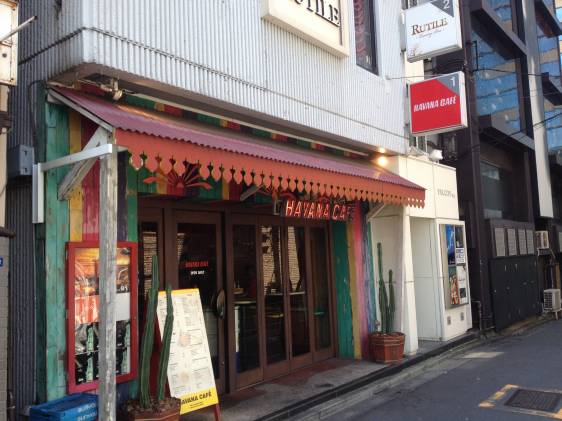 A few minutes’ walk from the Shibuya Crossing, this place is a no-frills standing bar popular with foreigners and a great place to meet people. You genuinely cannot stand here for long without accidentally elbowing/being elbowed and then starting a conversation. Beers are mostly 300 yen (only Heineken extra cold reaches the giddy heights of 500 yen) and cocktails are a straight 500 yen each. You can try Japanese drinks like umeshu (plum liquor) and shochu for 500 yen or chu-hai (shochu highball) for 300 yen.  There’s no seating charge (and no seats) so you won’t have any surprises!

A small food and drinks bar in Shibuya, Coins has a loyal following and a well-respected owner. Drinks start at 300 yen (like the 3 coins shops in Tokyo) and there is a good selection of sake to try as well as beer, cocktails and wine. It’s a relatively small but friendly joint and you’re sure to have a great night. Every Saturday is a hip-hop-themed night called The Breakdown.

Another great 300-yen/drink option, but in the fancier parts of town. All drinks are 300, including fancy cocktails and plenty of snacks too. Here you buy tickets and exchange with the staff when you order, so it’s great if you have a limit or need to keep an eye on your budget. The only rule is that men must buy a minimum of three tickets and women two (because we are weak and fragile things, two drinks is plenty)—so you have to have a combination of 2 or 3 snacks or drinks. They have a happy hour where some fancier drinks are included, and the three bars are all located in the Ginza/Yurakucho area. 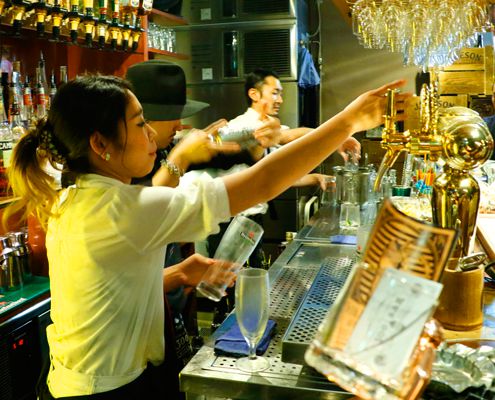 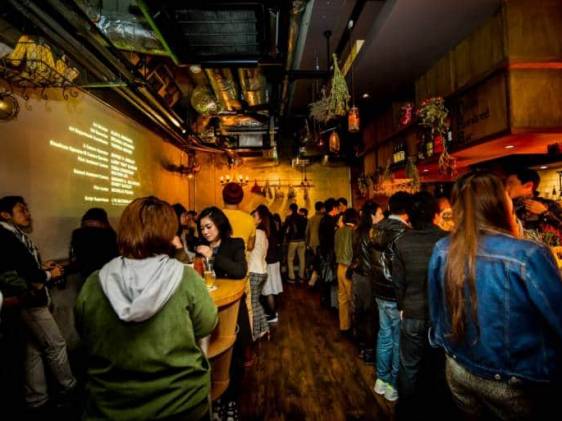 A cool place to go for live music and banter that goes on until the sun comes up. It’s a stone’s throw from Shibuya Station, and popular among both locals and visitors to Tokyo. There’s usually a 500-yen cover charge and 500-yen drink ticket, making for a budget-friendly night out. 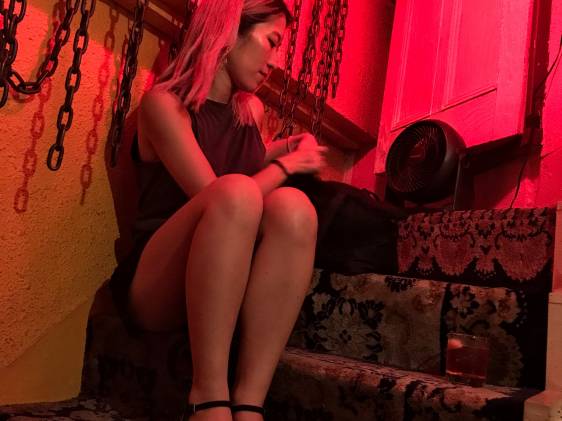 A language bar with cheap drinks, this is a great place to go if you want to practice speaking Japanese, English or any other language—they have specific nights for each as well as themed events. Happy hour is between 6pm-7pm and normal prices are decent too. Cocktails are 500 yen and beers are 600 yen, and no entry charges for the events – so if it’s social you’re looking for, this is the spot.

If you’re in Roppongi, you’re probably out for a certain kind of night…and that is exactly what Geronimo Shot Bar caters to. Walls lined with names of successful shot challenge champions, loud music, a central bar and cheap shots make this an easy place to enjoy. The regular menu isn’t so cheap (beer are 900 yen) but with happy hour until 9pm, no entry or table charge, random free drinks from others and anyone who rings the bell, you can easily have a cheaper night than at 90% of the dodgy bars nearby. They also have a weird level of celebrities: Chad Kroeger, Hugh Grant, Noel Gallagher, Offspring…so there’s also that. 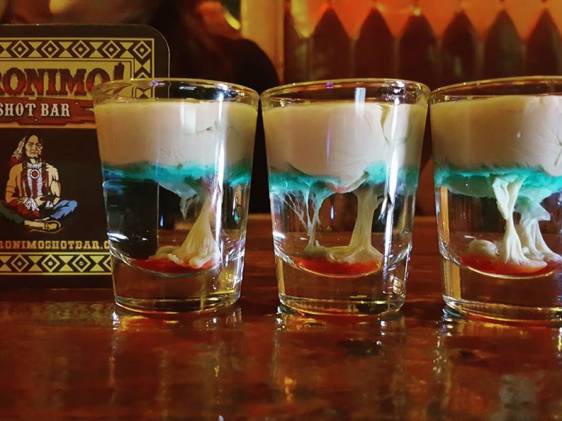 A true hole in the wall bar, but this time the hole is train shaped. The inside of the carriage resembles a regular one during rush hour but has a lot more graffiti. Drinks here are cheap, especially during happy hour which runs until 9pm and the atmosphere is great. Rock music blares out and staff are friendly and considering the proximity to other drinkers, you’ll be making friends pretty quick! Don’t forget to add your name to the walls and if you have any random foreign notes that can be added to the decor as well. 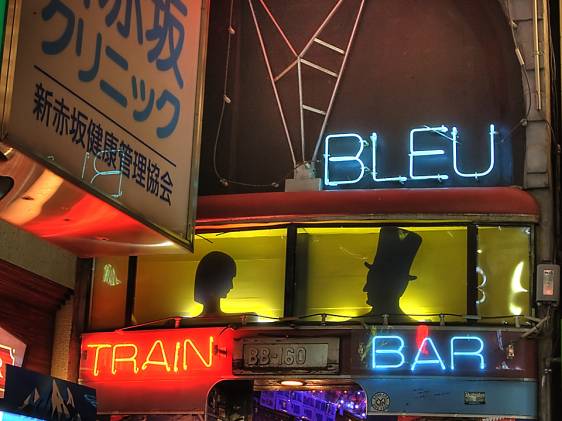 Drinks start at 600 yen, which may be more than some suggestions here, but this basement DJ bar is cool enough to warrant this feeling like a bargain. They have plenty of events including the regular Mystery Meat and All My Friends, as well as in-house DJs with an affinity for classics from the 70s onward. Definitely more laid back on weeknights, you might find it crowded with regulars on the weekend. The bar has two sections, with Echo being a larger space for the bigger events.

So if you need something super reliable and definitely cheap, Hub is a safe spot. They are all over Tokyo (you’ll start seeing the signs everywhere) and do have a bit of a rep as foreigner bars, but if you go to any that aren’t super central they are actually really popular with locals. Drinks are cheap and even cheaper during Happy Hour, and there are often deals going on too. The food is “British” but don’t get your hopes up. There is no cover charge or requirement for food orders, so it is a great cheapo option, especially for groups.