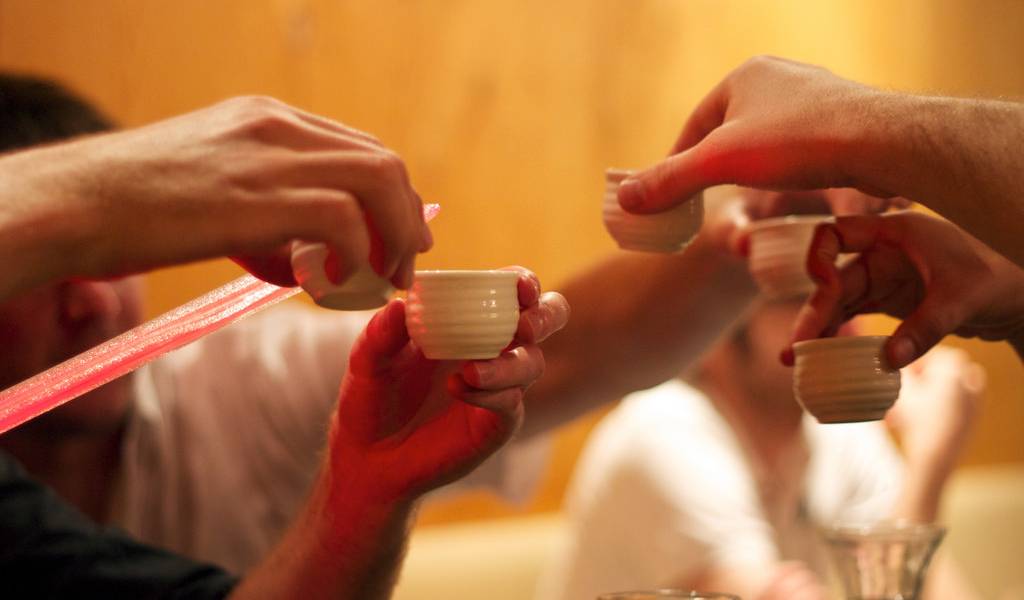 So now you know what to drink and where to go, but there is more to drinking in Japan than that. If you want to avoid being the stereotypical gaijin (foreigner) and drink like the locals instead, we have the tips on the rules, the remedies, the key phrases and, of course, how to survive a Japanese drinking party. Don’t worry, this still means getting hammered, downing drinks, singing and all the usual drinking-escapades—just doing it the Japanese way!

There are numerous benefits to having a few drinks when you’re in Japan—the main one being that you will undoubtedly meet a whole gang of Japanese friends. From near-blind panic when faced sober with an English-speaker, after two cans of chuhai and a highball, most Japanese people will begin channeling Shakespeare himself whilst vehemently professing, “BUT I DO NOT SPEAK ENGLISH WELL!” But, you don’t want to offend anyone—so here here’s a heads up on how not to mess up a night out.

With infamous photos of awkwardly sleeping salarymen and barely balanced girls in heels stumbling around Shibuya at 4am, the most impressive factor of the Japanese drinking culture is the collective dedication to arrive at work bright and early a mere few hours after forgetting your own name. So, you may be wondering how such a nation of drinkers actually manage to turn up to work every day and not cause chaos. Well, they have their hangover tonic game on point. There’s one set for before you drink, and one for after:

On your way out, stop by a convenience store and grab one of the little glowing bottles covered in pictures of livers, or the orange one—Ukon no Chikara—which is turmeric based, and down it in the shop (after paying, you thief). Then continue confidently on your soon-to-be-merry way…

1) A bottle of Pocari Sweat (a sports drink like Gatorade).

2) A little hangover bottle (if you can’t find them, look for 二日酔い or say “futsukayoi” to a passing clerk and you’ll be pointed in the right direction.

3) And, believe me on this one, umeboshi. The little pickled plums are a traditional cure, as they settle your stomach and is a help to the liver. So, down the bottle, eat the plum, sip your Pocari Sweat and you’ll soon be right as rain!

You may feel out of your depth, and don’t want to accidentally drink some snake-venom nihonshu, but fear not, some simple phrases will get you drinking, and get easier the more you do. Politeness is key, with two forms of please: kudasai (casual) and onegaishimasu (formal). Both are fine, see which you prefer but maybe gauge the environment. It’s expected that you call over a waitress if there’s no bell, and you may have to practice your projection, as izakaya get rowdy. A confident “Sumimasen” will get you noticed.

Sumimasen – Excuse me!  (to call over a waiter/get their attention)

Gochisosamadeshita! – That was delicious! (when leaving, if eating)

(Note that the ‘u’ at the end of words like onegaishumasu are usually silent, but pronounced in other regions—but no one will judge either way!)

So if you’re working in Japan or have some friends here, you may be invited to a traditional Japanese drinking party. There are very common with companies and schools (English teachers will be veeeeery familiar with these events). They are a brilliant opportunity to get to know co-workers and there’s nothing like 5 beers to loosen the tongues of those you had no idea could speak any English besides a panicked automatic “I’m-fine-thank-you-and-you”.

Unless you’re new or leaving, they can be pretty pricey, ranging anywhere from 3,000 yen to 10,000 yen for the course and nomihodai (all you can drink), and not including the after parties. If you’re worried, ask before, but this isn’t really negotiable and going à la carte is not really a done thing (also even non-drinkers do nomihodai, so get your money’s worth of that tea!). Money is either paid in advance, but more often to a nominated co-worker who sets up at the door, so come prepared.

Confirm beforehand. I’ve turned up dressed up to be met by a colleague in his soccer uniform. Some places see it as a chance to relax and avoid the suits, some think you should be suited-and-booted and ready to impress—you just never know.

Seating is usually randomized with a lucky-dip number scenario, which means you get to meet a different crowd. You might be placed with your English-speaking coworkers though, depending on your company/language skills.

There isn’t always entertainment (unless you love speeches or long slideshows), but recently I’ve seen a lot of homemade quizzes and even interactive phone-voting-based drinking games with younger parties so you never know. At some end-of-year or New Year parties, there are bingo raffles, complete with an 80s bingo machine if you’re lucky. Prizes can be really fancy (or be book tokens, if you’re me), so play to win if you get the chance! (If you walk into a room with a wedding-style pile of wrapped boxes, get excited!).

These are 9 times out of 10 a set course and drinks deal, since they are dealing with large numbers. Restaurants are used to these parties, and have the schedule set to last a pre-agreed amount of time, often 2 hours. Beer is often served first for large groups to allow a smooth kampai, then other drinks are available (you won’t be limited to beer even if you can’t see anyone drinking anything else don’t worry). Changing food for dietary restrictions can sometimes be done, (I have had full alternatives pre-planned and approved as a vegetarian, on-the-spot changes made, or a polite ‘no’ to any request, so it really depends on the restaurant. If you are very strict or have allergies, maybe ask or just say, “Onaka-ippai!” (I’m full!’) with a smile and offer unwanted food to your neighbors. If your coworkers are aware they’ll probably help you out with swapping and trading anyway!

These will most likely be plentiful, and very, veeeeeery long. I have experienced a 55-minute speech, and not sure if only understanding the odd phrase left me better or worse off than those who understood it all. If not fluent, it’s useful for Japanese practice, perfecting your ‘smile/nod/laugh-at-the-right-time technique’ or just planning your week in your head. Most importantly, it’s totally fine to eat and order during speeches if they drag. Quietly hail that waiter: it will make the speeches easier to handle.

The niji-kai and sometimes sanji-kai are second and third parties, where the crowd thins out and the younger ones usually head out to another izakaya and/or karaoke. This does mean more money but also more ridiculous behavior. These are even more fun, as everyone is pretty drunk by this point, and finally relaxing. Enjoy these, and never speak of them again. (Knowing looks and grins are permissible, but requests for repeat dance performances are definitely not, it turns out).

There you have it, the full and comprehensive guide to drinking in Japan! Now, after all that reading you probably worked up quite a thirst…

A Beginner’s Guide to the Japanese Izakaya