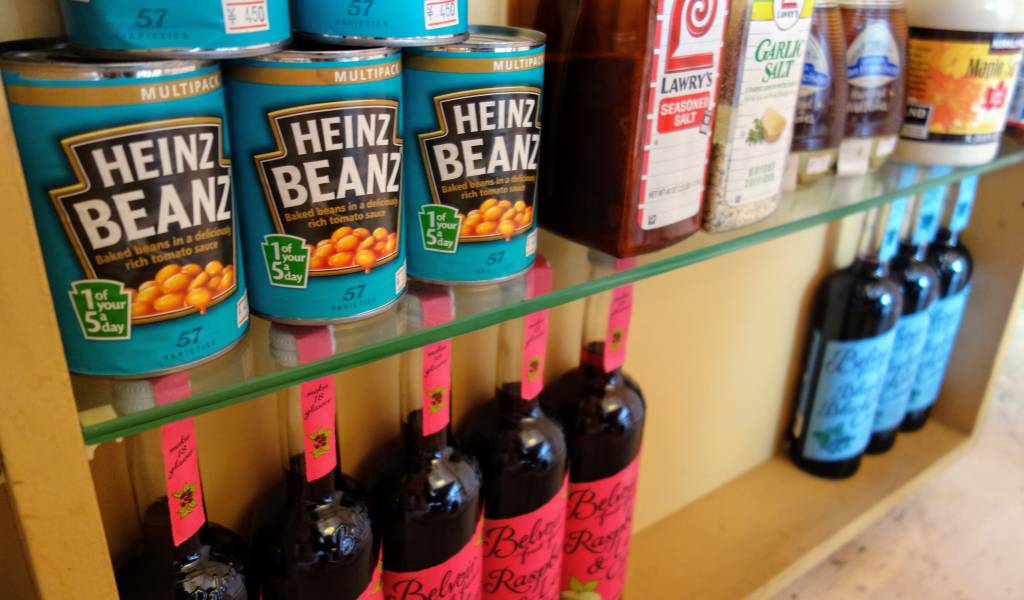 Haul away from Home: Import Stores in Tokyo to Cure Your Cravings

If you’re staying in Japan long enough to start missing your favorite foods, fear not, these Tokyo import stores are where to go. It’s not always cheap, but sometimes you just have to treat yo’ self.

Tokyo is filled with new flavors, amazing sushi and addictive ramen—and plenty of it is really affordable—but it isn’t always what you want. There’s no shame in craving some home comforts when you’re away; maybe it’s Marmite, maybe it’s refried beans, the heart wants what the heart wants, but the trouble lies in finding it.

Supermarkets in Tokyo can vary and while they might have foreign-inspired food like pasta sauces and cheese, they are rarely the real-deal—close, but not quite right (take the pre-packed camembert as an example). If you want the branded goods, imported from home and able to hit that nostalgic spot, head to the import stores of Tokyo and try to maintain some control. They are also the best places to go if you’re looking for vegan, vegetarian and halal items as they are still considered ‘foreign’ preferences, thus they are stocked more widely at import shops—especially at National Azabu and Nissin World Delicatessen.

Couple of things to remember when it comes to international shopping

Be prepared to pay for your luxuries. Imported food is not—and never will be—cheap. Premium prices are to be expected on name-brand items, but often also on things you would see as cheap staples elsewhere. Things like oats and lentils will be extortionately priced compared to the UK for example. But unless you can get to Costco and buy in bulk, you’ll have to adapt and come to see lentils as a bit of a luxury.

Shops are only one option: Depending on where you call home, home comforts vary in their findability here. Western-wise, American food is by far the easiest (obvious), while British and Australian delicacies are harder to get a hold of, but not impossible. For example, Tim Tams are never far away. For Indian, Korean and many other nationalities, it can be easier to head to districts of the city which are known for higher non-Japanese populations as they often have independent stores selling imported goods—these are often cheaper too!

A pretty posh option and more like a real supermarket, Seijo Ishii stocks both imported items and Japanese-made foreign foods, so you get the best of both worlds (think Kraft mac n’ cheese and Japan-made authentic pesto). They are particularly good for ingredients rather than just pre-packed items, and stock a decent variety, including plenty of herbs and spices needed for everything from Italian to Indian cooking. They stock specific flours, dried beans and pulses which can be hard to find in smaller shops like Kaldi, and also in larger quantities.

One of the best draws for Seijo Ishii, however, is the chilled section: a heaven of cheeses, meats, yogurts and deliciousness that you’ll struggle to resist.

They have plenty of locations in Tokyo, including in Tokyu Food below Shibuya Station, just look out for the pink sign! Other locations include Roppongi Hills, Shibuya, Tokyo Dome LaQua and Shimokitazawa. Check out Seijo Ishii’s full shop list here.

With a whole floor dedicated to wine, there’s every chance the secret sommelier in you will rear is costly head, so you might have to keep a strict eye on your basket. Similar to National Azabu, they often hold promotions and events so keep an eye on their twitter or facebook in case there’s a deal you can take advantage of.

Their range is pretty decent and much more like a regular supermarket than places like Kaldi, so you can get a full family-shop done if needed, with fresh produce and tinned options too. They also have some good vegan/veggie, gluten-free and quite a few halal options which are approved by the Nippon Asia Halal Association or the Japan Muslim Association and are labeled clearly throughout the store. Nissin also have a delivery offer available so you don’t have to cart it all home on the train if you don’t want to! 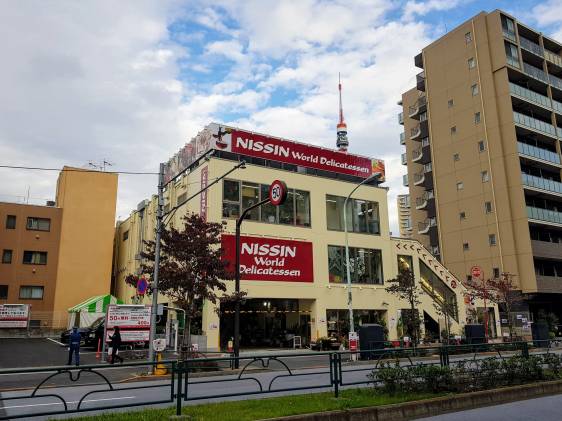 Kaldi does indeed sell coffee, but they sell plenty of other things too and are one of the most frequently found import stores in Tokyo, alongside Seijo Ishii. Focusing on packaged pantry items like pasta, cereal and sauces galore. They’re handy to pop into and often located close to train stations.

While the stores are small, they are packed tight and cover a fair few different countries, but it is more focused on Italian/Western/American items or Western-ized versions of other cuisines (Old El Paso Mexican kits, for example).

They have a small chilled section with limited cheeses and meats, but the variety is hit and miss—sometimes you can get ricotta and parmesan, sometimes it’s just the processed American options. They have a good sweets section which is handy for gifts and stock some organic items like muesli or oats (not necessarily imports, but same as from home), but the brands vary too.

National Azabu in Hiroo is an expat legend, and usually the go-to place for a proper shop and fresh ingredients. Alongside imported- and foreign-inspired foods, they sell organic fruit and veg, vegan and vegetarian items and have themed tastings or country-based displays.

It is a pretty active supermarket and they frequently hold food-based events to promote their produce as well as following more Western-trends like plastic removal and vegan-substitute items.  They have plenty of pantry staples like Heinz baked beans and cereal brands like Dorset, so choose carefully because it’s pretty easy to spend your weekly budget on a small basketful after wandering the aisles.

Popular for its French-style delicatessen, this section of Kinokuniya is filled with food rather than books and offers a pretty decent selection of chilled and dry products. This is one of the places where you can get Marmite (not just Vegemite) and a freshly baked French baguette to enjoy it on—as well as some real cheese to go with it (heaven!). So if you’re feeling like treating yourself this is the place. It is not so great for a full shop, and the prices are a bit high, but it’s a good place to look for those hard-to-find items. 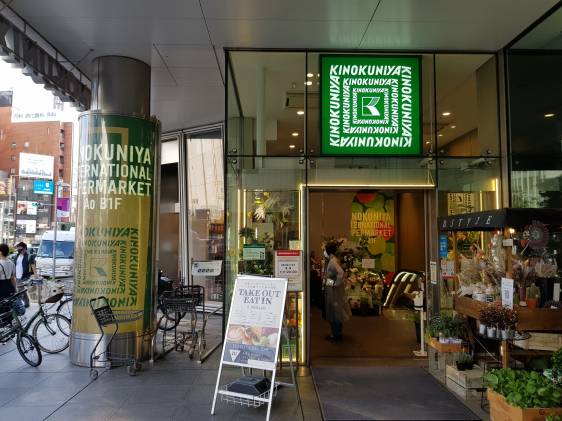 The promised land of affordable bulk-buying, Costco in Japan is the place to go if you have a membership card, a car, storage space and the funds to buy large quantities up front. While these factors are a little prohibitive, they can be a sensible investment if you’re staying for a while and know you’ll be relying on home staples. There are a few stores in Tokyo’s neighboring prefectures like Kanagawa, Saitama and Chiba as well as near other big cities in Japan.

Membership is available to individuals and costs ¥4,400 for a year. You can take guests, so if you have a couple of friends it’s cheap to split (we’ve also been reliably informed that Costco staff have foreigner-blindness, so borrowing a fellow foreigner’s card is rarely ever a problem). If you really want to stock up, but can’t get there, check out the delivery options below!

Yamaya is mainly an alcohol store but has expanded to sell a decent selection of imported goods, albeit mainly in the category of snacks, pantry items and canned food. Depending on the size of your nearest Yamaya this can vary, so don’t discount them immediately, but they definitely don’t have much in the way of fresh produce. The alcohol selection, on the other hand is pretty great and you’ll find a good range of beers, wines and spirits from across the globe. Also, you’re unlikely to find them cheaper elsewhere, as they buy in bulk—so you can pay up and not worry about bargain-hunting.

Aeon supermarkets occasionally have decent foreign sections, but their liquor stores are where they really shine. If you’re after craft beer, wine or looking for some Pimms for the summer—this is a good spot to try (but no guarantees on the elusive summer drink). Not always as cheap as Yamaya but sometimes stocking different items, you might have better luck here.

Multiple locations in Tokyo including Koenji, Jiyugaoka and Yotsuya

If you’re unable to find something in stores or simply can’t get to them, ordering online is becoming more of a practical options.

Amazon JP, delivery can often be paid for in convenience stores or as COD (cash on delivery) so you don’t need a card to do it. There are some food specific options too though:

iHerb is a popular option for those looking to ship in unusual items that the above Tokyo import stores don’t stock—think natural alternatives, supplements, health foods or make-up—it’s all on there. They deliver to Japan and have decent rates depending on how much you order, so if you’re exasperated and don’t mind waiting a few days, you can have your home comforts delivered to your door.