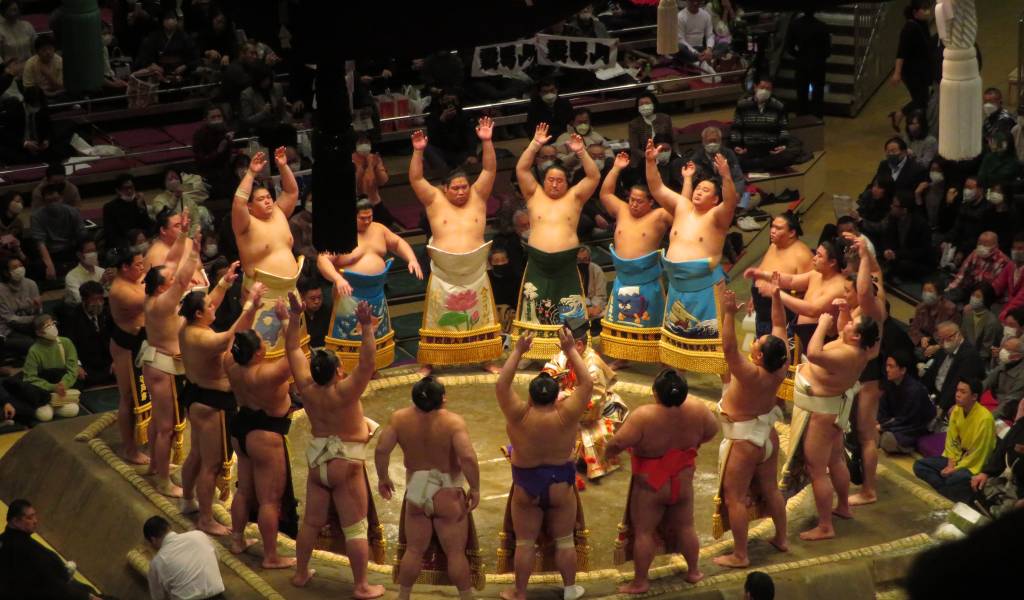 Guide to Seeing Sumo in Tokyo

If there’s one thing people know about Japan, it’s sumo wrestling. Well, that and geisha, the iconic Mount Fuji, and those bullet trains… Sumo tournaments happen six times a year, and three of those take place in Tokyo. If you’re fortunate enough to be here when there’s a tournament on — in January, May, or September — then it’s well worth checking out. Here’s how to see sumo in Tokyo, for cheap(ish).

Not here during the tournament? Consider a personal sumo experience or watching a morning stable practice.

Sumo is a timeless sport and perfect for visitors. While there are intricacies and foot-trickery that only experts will spot, there’s more than enough throwing, spinning, and near-misses to keep newcomers interested. Despite its honored position as the national sport, in recent times sumo has suffered from scandals and a dearth of Japanese wrestlers in the top ranks. This really only matters if you’re a hardcore fan, though — watching the frankly enormous players step into that ring and square up is seriously impressive.

Official sumo tournaments (called “basho”) are held three times a year in Tokyo — in January, May, and September — at Ryōguku Kokugikan, the national sumo stadium. Each tournament is held over 15 days, so there’s a total of 45 days of top-class sumo in Tokyo each year.

You can buy your Tokyo sumo tickets on Viator.

Opening, closing, and any weekend days are always the busiest. As you’ll know if you’ve been to Tokyo Cheapo before, it’s best to do things off-peak. This means to see cheap sumo in Tokyo, your best bet is a weekday falling between days 3 to 6 and 10 to 12.

There are many different types of seating available for sumo in Tokyo, and a range of prices. Until recently, ringside tamari seats weren’t open for the general public to purchase; these were reserved for sumo association sponsors and members. Now (in theory anyway) you can get the chance to have a 180kg sumo wrestler plant his rear-end on your face as he flies from the dohyō — but tamari seats are still quite hard to come by.

The rest of the seats are divided into “box seats” and “arena seats” and are fine for us Cheapos.

Box seats, or masu seki, are basically a (small) square of tatami mat into which 4 or 6 people fit, so you have to buy all 4 or 6 seats. Note that these are not spacious: they’d typically fit four small Japanese grannies or one sumo wrestler comfortably. Tatami has more give than wood or concrete, but most people bring their own cushions. The box seats are further divided into A, B , and C — moving progressively further from the action.

Arena seats: Easier to get

The arena seats are on the second floor of the gymnasium and are similarly divided according to proximity to the dohyō. Since box seats sell out fast, you’re more likely to pick up an arena seat.

Tokyo sumo tickets: How much do they cost, and where can I buy them?

You can reserve tickets online in English. If you run into any trouble, you can also check the official sumo website for up-to-date information on buying tickets (and snag them there, too — but only in Japanese).

Pro tip: Whatever ticket you end up buying, it will give you all-day access to the tournament venue. Matches may start around 8:30 a.m., but the biggest, best wrestlers only roll out in the late afternoon — so you can nip out for a bite to eat in between bouts. And, on that note …

What to eat and drink at sumo

Although not completely over the top, you’re a captive audience at the sumo, so food and drinks are sold at a premium. Unlike sports events overseas however, you are permitted to bring whatever you like into the arena. When I went in, I took in a huge 2L cardboard carton of Japanese sake (which sells for less than ¥1,000 at the supermarket). I was worried that they would search my bag and confiscate it, but they don’t usually search bags (at the moment, anyway), and they’re not that fazed. Taking your own bentō and snacks is also a good idea. Saving money on food can make watching sumo in Tokyo a bit cheaper.

Other ways to see sumo

Not around during a tournament? Never fear — you can still get your sumo fix by watching a morning practice session through a stable window, or (better yet) booking a tour that takes you into the sumo stable itself.

If you happen to be in Tokyo during autumn, you might be able to watch student sumo wrestlers perfecting their technique. Each year at the Setagaya Autumn Festival, a ritual sumo session takes place in an outdoor dohyō in front of the shrine. With a more playful element to their matches, the students are brilliant to watch, with tag-team challenges and impressive strength. 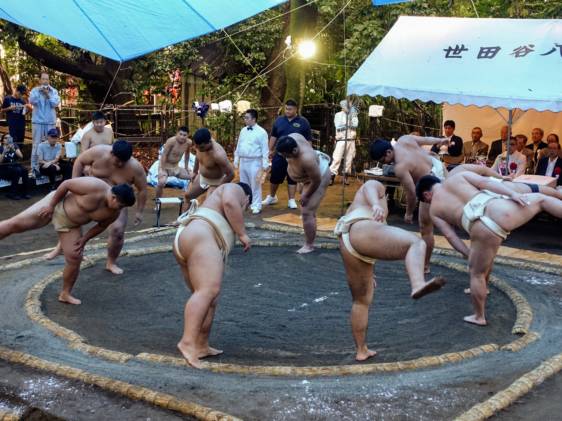 While we do our best to ensure it’s correct, information is subject to change. This post was originally published in December, 2014. Last update: January, 2023.