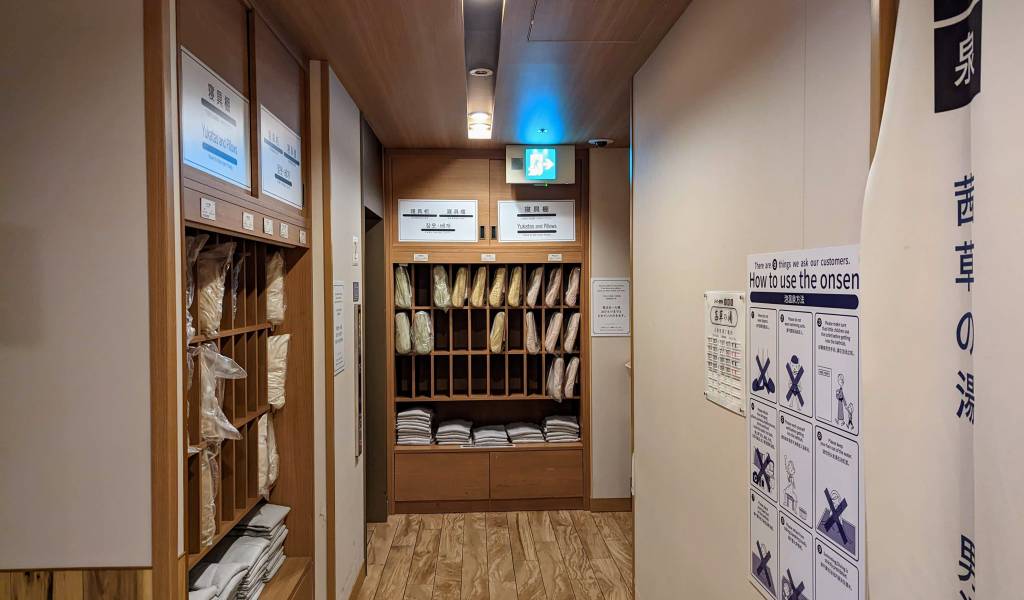 Do you know what the worst thing about staying in cheap hotels or cramped hostels in Tokyo is? The pillows. I mean other people might say the price, the thin walls, the thin mattress, the unreasonable curfew, and the tiny bathrooms, but for me, lumpy pillows are the killer.

That’s why I love the Super Hotel chain. They have hotels all over Tokyo (and other parts of Japan) at fairly reasonable prices. Depending on the day, a fairly “normal” sized room with a double bed is between ¥6,000 and ¥10,000. As far as I know, they have no restriction on the number of people you can bring inside your room, so if you don’t mind squeezing four people on your double bed, you have just scored a cheap hotel room.

1. The entire process is automated

When you check in, you are given two passcodes. One passcode opens the automatic door (in the lobby), the other opens the door to your room. It’s easier than worrying about a room key, just make sure to snap a picture of the number(s) with your camera.

2. They will hold your belongings until the check-in time (after 3pm)

You don’t even have to ask. They offer to hold your luggage.

3. You can pick your own pillow based on thickness, firmness, and shape

This was my favorite part (as you may have noticed).

4. The morning breakfast is a delicious variety of Japanese traditional breakfast menu items

They have everything from salad to bread to miso soup to hamburgur patties. Most mornings they also have a fun assortment of fruits and vegetables.

5. The walls are thick

Most Japanese hotels (and apartments) have paper-thin halls that give you a first-hand chance to practice your Japanese by listening to the couple three rooms down having a small argument. Not Super Hotel. Perhaps our neighbors were just quiet, but this was one of the first times I didn’t wake up at 2am to a drunkard stumbling down the hallway.

6. You don’t have to check-out, you can just leave

Because you are not given a key-card, you can leave at any time. They ask you be gone before 10am, but don’t exactly check. I was running late and left the hotel with my belongings at 10:15 (I’m a rule breaker) and no one looked twice.

7. They have centralized locations

With branches in Asakusa, Ikebukuro, Ueno, and many more, Super Hotel is just a stones throw away from most major train stations. Even from the station itself, it is only a short walk.

1. The shower is tiny

It is, like, really tiny. But then again, it is Japan.

However, like I said before, there isn’t an official check out. You just leave the hotel with your belongings before 10am; they do the rest. It takes the stress away from packing. When I scurried out at around 10:15, the elevator was full of equally late patrons.

3. You have to take your shoes off at the door

But by now we can all deal with that.