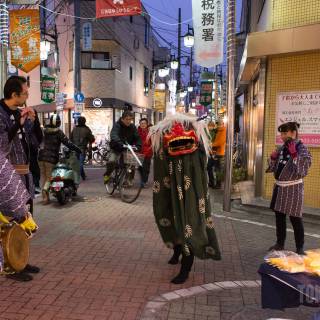 Ekoda’s Night Bazaar is an event held in the shotengai—a shop-lined street—that links Ekoda Station with nearby Shin-Sakuradai Station. The shops bring some of their wares onto the street to create a festival atmosphere and you can pick up some festival food. The event is held on the 4th Saturday of odd-numbered months between 5pm and 8pm and offers entertainment for kids.

There’s also the chance to get Tokyo Verdy Football Club character goods, origami, a Gunma prefecture vegetable market, a portrait artist corner and, perhaps most exciting of all, the chance to buy Nerima daikon radish pickles. Ekoda is located in Nerima ward which is famous for being Tokyo’s largest producer of daikon radishes.

There is also an ink-stamp collecting rally which offers the chance to win prizes such as a pair of Tokyo Disney Land tickets, Nerima ward shopping discount coupons, potted plants and plastic rubbish bags. Presumably that last one is actually a booby prize.

There should be, if nothing else, a fun, family atmosphere. There are several restaurants and bars around the station to continue the fun afterwards.