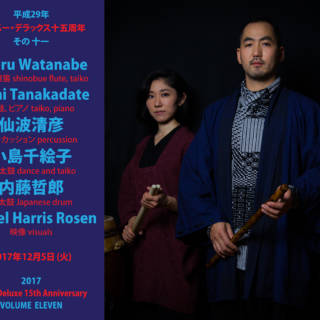 New York-based composer and musician, Kaoru Watanabe returns to SuperDeluxe with a stellar cast of musicians to perform music from his latest album Néo. Watanabe, who has been working with the likes of Yo-Yo Ma and the Silk Road Ensemble while making music for such filmmakers as Martin Scorsese and Wes Anderson, has been developing a body of work that seamlessly melds the “natsukashisa” (nostalgic feeling) of old Japan with the sophisticated improvisations and compositions of jazz, Indian classical music, contemporary classical music and beyond.

At the core of the performance will be Watanabe in duo with his top disciple Fumi Tanakadate, an accomplished classical pianist and taiko
drummer. Joining them will be Semba Kiyohiko, revered as one of the leading Kabuki percussionists AND jazz and rock drummers in Japan; Naito Tetsuro, a virtuosic taiko drummer and composer and former Kodo colleague of Watanabe; and the hugely original and influential dancer Kojima Chieko, one of Kodo’s most distinguished veteran performers. Visual artist Daniel Harris Rosen will provide digital and analog projected backdrops for a musical journey you won’t want to miss!