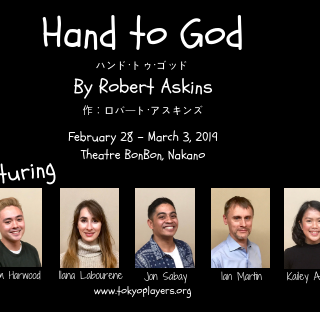 After the death of his father, meek Jason finds an outlet for his anxiety at the Christian Puppet Ministry in the devoutly religious, relatively quiet small town of Cypress, Texas. Jason’s complicated relationships with the town pastor, the school bully, the girl next door, and—most especially—his mother are thrown into upheaval when Jason’s puppet, Tyrone, takes on a shocking and dangerously irreverent personality all its own. HAND TO GOD is a caustic dark comedy that explores the startlingly fragile nature of faith, morality, and the ties that bind us. It garnered rave reviews on Broadway in 2015, received five Tony Award nominations (including Best Play) and was subsequently recognized by “American Theater” magazine as the most-produced play in the United States in 2016-2017!

*Due to explicit language and adult content, this play is suggested for audiences age 16 and up.*