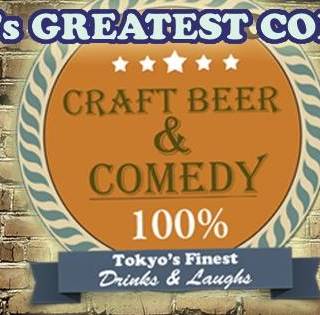 There’s more comedy than you can shake a stick at this Saturday night in Roppongi, with the return of
the long-running Craft Beer and Comedy Show to its 7pm slot. A combination of two of the best things in life, enjoy the English-speaking acts with an ever changing choice of world beers (including plenty from Japan). Taking the format of a traditional stand-up show, it begins at 7pm, but doors open at 6pm. This coincides nicely with “Hoppy Hour” where you can get a medium for the price of a small, and a pint for the price of a medium. Tickets for the show are 1500, and include a free house drink (only one of the craft beers available) and can be bought at the door.

Two Dogs Taproom has 25 craft beers on tap from all over the world, including a wide variety of Japanese creations and is well worth a perusal. It is also the home of  potentially the best wood fire oven pizzas, hand-rolled and made to order. So basically, comedy, pizza and beer—if you fancy one, two or all three of these lovely things, then this Saturday you know where to be!

You can also pay by bitcoin at this venue – it’s basically the future!