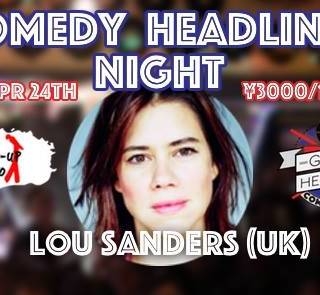 For one night and one night only, Tokyo is welcoming on of the UK’s top comedians – Lou Sanders! Enjoy a night of quality international comedy at Good Heavens Comedy Club in Shimokitazawa with a good dose of British satire and wit rarely seen in the city. Lou has appeared on Russell Howard’s Good News, Radio 4’s The Unbelievable Truth and  written for countless top shows including 8 Out of 10 Cats and Mock the Week – so get your tickets early and enjoy the show!

Named as one of the top comics to see in Vogue, Elle, TimeOut, The Times, The Independent and The Guardian!