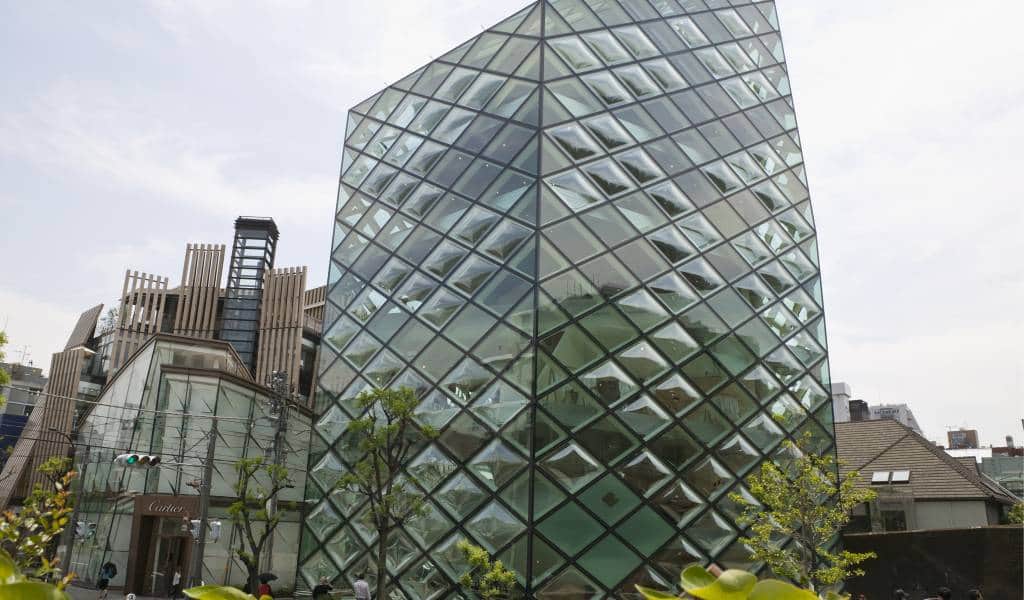 Bold claim? Sure, Dubai has it’s gravity defying skyscrapers, Hong Kong and Shanghai both have clusters of modern glass and steel behemoths that put those in Tokyo to shame in terms of scale and grandeur – but Omotesando is a single neighbourhood with more buildings by great modern architects than anywhere else – and entrance is free.

There are so many great buildings in this area that it’s difficult to cover them all in a single article – mention the names of these architects to anyone with an interest in architecture and you will get instant recognition.  In the world of architecture, they’re all superstars.

Here, we present what we humbly believe to be some of the highlights.  Also, I’ve put them in walking order (check the map at the bottom of the post) so when you visit Omotesando, you can view them in the order shown here – although you can of course view them in any order you like.

Hiroshi Nakamura isn’t exactly a famous architect outside Japan, but he’s been given a great site to showcase his ideas. From the outside, this building looks like an unremarkable jumble. Sure, there are trees on the roof terraces, but that’s hardly remarkable these days.  However, this building is like a traditional Japanese garden – it’s a building of spaces – it’s meant to be enjoyed as a series of different spaces rather than as a cohesive whole.  The mirrored entrance way is very cool – although strangely, only on exiting the building did I notice the kaleidoscope effect. The roof terraces are worth checking out as well.  The great thing is that they’re not just for looking at through windows – it’s open to the public and there is a Starbucks so you can actually sit amongst the trees and enjoy a drink.

Now walk along Omotesando in the direction of Omotesando Station.  Just past the giant toy shop Kiddyland on your right, you’ll see our next exhibit.

Gyre is a mixed use retail and restaurant building by the Dutch architects MVRDV.  The term ‘Gyre’ comes from ‘turn’ or ‘rotate’ (think gyrate).  This building isn’t a belly dancer, but the off centre layers give it a sense of movement and create lots of interesting terrace areas.  Admired as a whole, the effect is somewhat nautical.

Our next building is right next door.

Kazuyo Sejima and Ryue Nishizawa – the architects behind SANAA were awarded the Pritzker Architecture Prize in 2010 – often referred to as the Nobel Prize of architecture.  This building is most impressive at night – appearing like a layer cake as it is illuminated from within.

Sticking to the same side of the road, continue about another 100 metres or so up towards our next building.

When asked about architecture in Tokyo, Ito said that it’s a challenge (I’m paraphrasing here!).  Because the value of the land beneath the buildings is so high, it’s necessary to use the whole envelope so Ito’s Tokyo buildings are all about the surfaces. You can see that in the TOD’s building – it originally wrapped around an ugly little building (since demolished) on the corner taking up 100% of the space available.  The remarkable thing is the way that the concrete and glass seems to wrap around the building seemingly completely independent of the internal structure – revealing glimpses of the interior.

Our next stop is on the same side of the road but quite a bit further along.  Go straight through the Omotesando/Aoyama Dori intersection and then head about another 100 metres down the slope.

Herzog & de Meuron are also Pritzker Prize winners.  This building is incredible – even more so when viewed at night when lit up from within.  It’s also unusual for a building of its scale in Tokyo because it has room to breathe – unlike the TOD’S building, there is space around the building which makes it stand out even more.  You should definitely head inside – the world viewed through the giant lenses looks quite different.  Staff outnumber customers about 6 to 1 – but don’t be intimidated – even cheapos are allowed to look!

Unfortunately, the Mosaic Building and the smaller Cartier Building suffer in comparison to the Prada building which is right next door.  Perhaps for this reason, I didn’t like the complex very much when it was built – it seemed to be noisy and intentionally eye-catching in contrast to the serene Prada building next door.  However, it’s grown on me.

Head right to the end of Omotesando for our final architectural delight.

I’m afraid this photo doesn’t do the building justice – the museum is closed on Tuesdays so I couldn’t get close to the building.  Despite it’s scale, it’s actually a building of intimate spaces and attention to detail.  The sheltered area under the eaves with a zen garden and the bamboo grove that grows next to it is a lovely serene space.  In my mind, it’s quite unusual amongst modern Japanese architecture in that it takes inspiration from the traditional Japanese kura (old style warehouse).  Although Meiji era Japanese architects often tried to blend western with traditional (to rather unusual effect) modern Japanese architects have tended to steer away from these motifs.

This isn’t architecture, but you’ve walked almost the whole length of Omotesando to get to the Nezu Museum so you might as well have a look.  Less than 100 metres away from the museum is the house that celebrated modern artist and sculptor Taro Okamoto lived in.  The residence is now a museum, but the best part of the museum is actually visible from the entrance – so you don’t need to pay the entrance fee unless you’re a hardcore fan and you’d like to see how he built his wonderful creations.

Apart from those listed above, the area and its side streets are crammed with buildings by other famous architects.  Tadao Ando, Zaha Hadid, Fumihiko Maki and Kenzo Tange (all Pritzker Prize winners) to name only a few.  For a fan of modern architecture there is nowhere better.