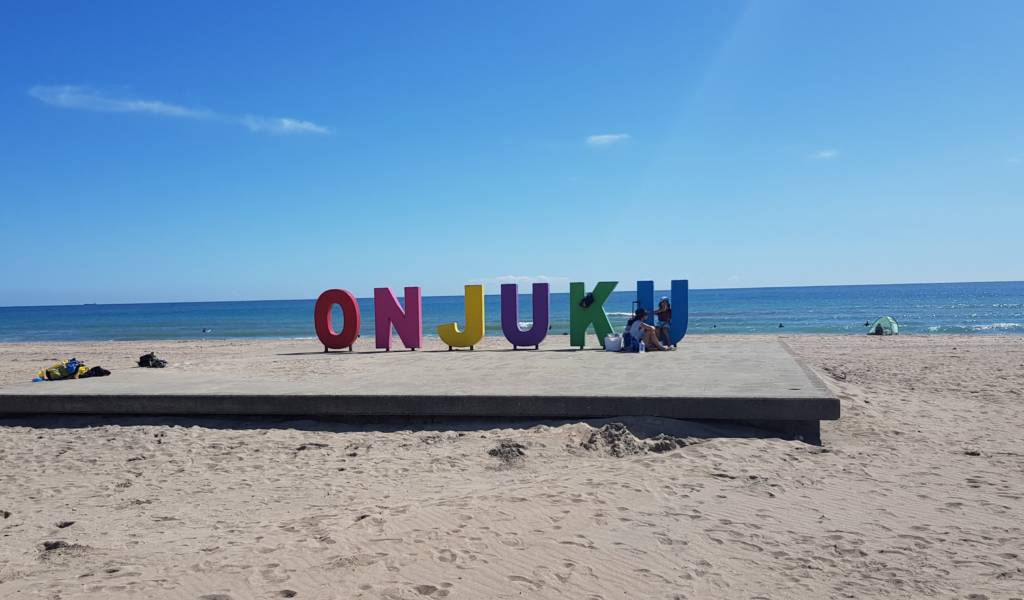 Onjuku is a town on the Pacific Ocean facing east coast of Chiba’s Boso Peninsula. The town is known for the wide, white sand beach and for surfing.

Located less than 90 minutes from Tokyo by train, summer sees hordes of city dwellers descend on the area. Outside the “official” summer swimming dates of July 1st to August 31st, the town returns to being a sleepy seaside village.

As with many other domestic tourism spots, Onjuku saw plenty of condominium development during Japan’s bubble era of the 1980s and early 90s. In the years since, there has been very little in the way of development.

Aside from the beach, Onjuku is also known for the local delicacy of Spiny Lobster (there is a festival in early October) and for the wreck of a Spanish Galleon blown off course between Mexico and the Philippines in the 1600s—resulting in the first contact between feudal era Japan and the Spanish Empire. Today, there is a monument marking the event on the outskirts of Onjuku.

If transferring from another line at Tokyo Station, be aware that the Keiyo Line is separated from all the other lines – about a 15 minute walk from the main concourse.

If you want to avoid the ¥1,360 limited express fee, you can take the Keiyo Line from Tokyo Station to Chiba Station and then switch to the Sotobō Line for Onjuku. Although cheaper at ¥1,980, it will likely add an hour to your trip.