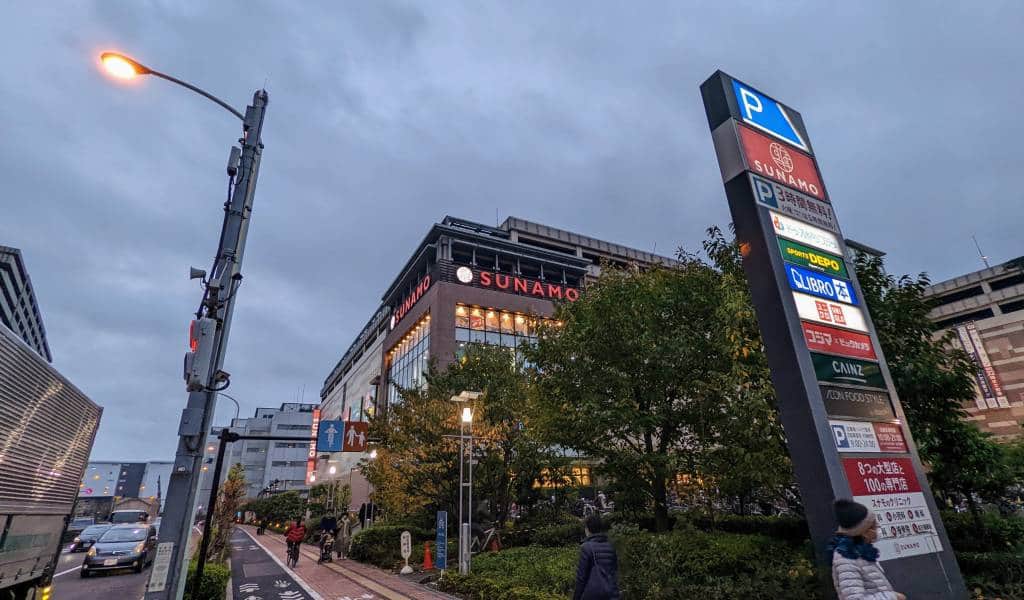 Sunamachi (literally “sand town”) was a town in east Tokyo (now Koto Ward) that is now split into multiple sunamachi—Minamisuna, Kitasuna, Higashisuna, and Shinsuna. It has a station (Minamisunamachi) on the Tokyo Metro Tozai Line.

The area is low lying and was traditionally prone to flooding and storm surges. In the park next to Minamisunamachi station, there is a marker pole showing the water level when the area was inundated by the sea in a particularly severe typhoon in the 1950s—it’s well over head height, so if you come here in a typhoon, bring a life jacket!

To the north of the park there is a large AEON STYLE supermarket and an enormous branch of the DIY store Konan Doit. If you have (or have hired) a car, this a great place to load up on supplies for weekend projects.

To the southeast of the station is the large Sunamo Shopping Mall, home to a Cainz home center, a Kaldi, a Bic Camera, numerous chain stores and a food court.

Kitasuna is home to Sunamachi Ginza—one of the many “ginza” shopping streets spread throughout Tokyo and Japan.