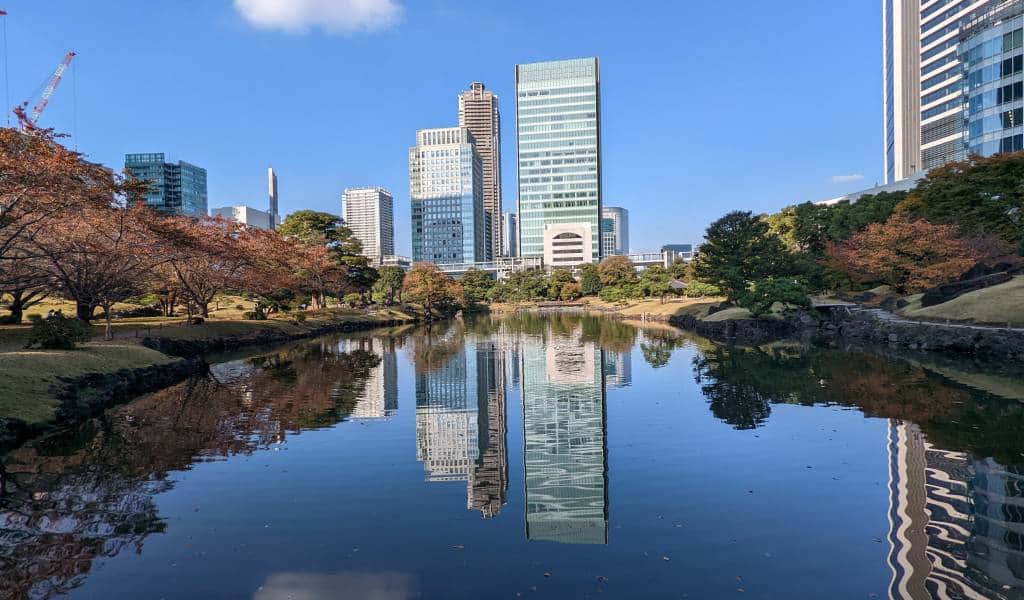 Located next to Hamamtsucho Station, Kyū Shiba Rikyū Garden is a Japanese garden with a large ornamental pond fed by the nearby tidal Sumida River.

The garden isn’t as large or varied as Hamarikyū Gardens, which are located just to the north, but the garden is a relaxing respite from the hustle and bustle of the surrounding neighborhood — as long as you can block out the noise of passing trains including the Shinkansen, the Yamanote Line, and the Tokyo Monorail.

The present-day garden was once the site of feudal lord Okubo Tadatomo’s Tokyo residence. The first garden was constructed here in 1686.

In the late 19th century, the property was purchased by the Imperial Household Agency and it became “Shiba-Rikyū” (Shiba Detached Palace). Later, a western style guesthouse was constructed to host foreign dignitaries. When giant fires destroyed the buildings and all of the garden’s trees after the 1923 Great Kanto Earthquake, the land was gifted to the City of Tokyo. The restored garden opened to the public on April 20, 1924.

The garden is a good place to see wisteria from the end of April, with a trellis set up near the main entrance. Kyū Shiba Rikyū also features plum blossoms, cherry blossoms, azalea, and hydrangea, among many other seasonal blooms.

If you combine a visit to Kyū Shiba Rikyū Garden with nearby Hamarikyū Gardens, then you can purchase a combined ticket for ¥400 — a saving of ¥50 over paying for admission separately.

About one hour is plenty of time to have a relaxed stroll around the garden.