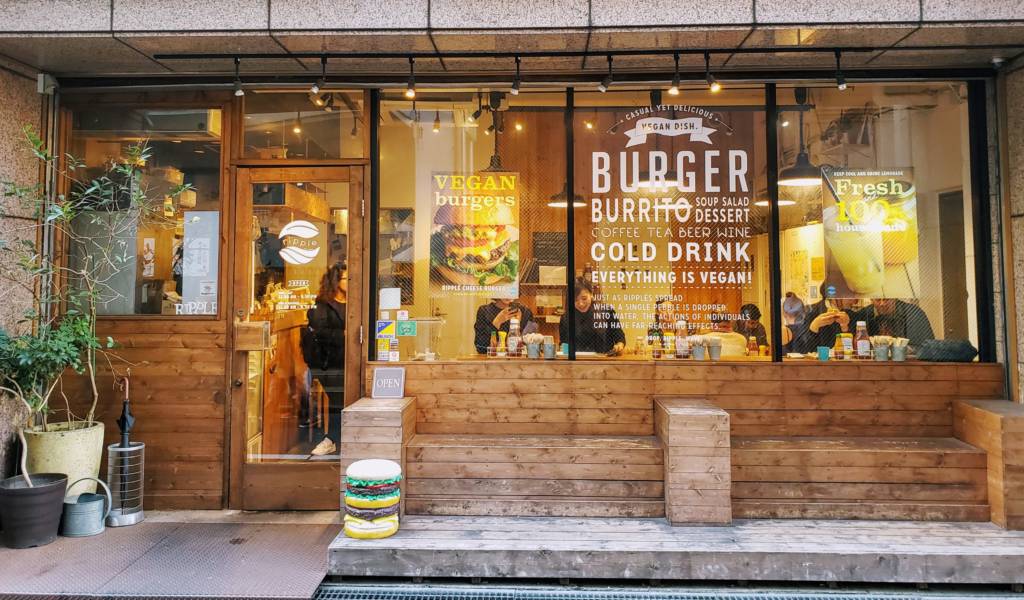 A vegan restaurant offering a junk-food take on a salad-associated cuisine. Choose from cheese-burgers, burritos and french toast – all entirely vegan and all delicious (although we recommend the burgers every time). As usual, vegan food doen’t come cheap, but for a treat this place isn’t bad and is one of the more affordable options in the Ain. Soph chain.

Ain Soph.Ripple might sound like a dodgy cult or a computer virus, but it is actually the new code word for amazing vegan burger. Now, me and my friend aren’t vegan, but these burgers were so good, the sounds we made while devouring them were bordering on inappropriate.

Finding truly vegetarian food in Tokyo is a struggle, let alone vegan. It can be limiting to say the least, but there are an increasing number of incredible places popping up—alongside the old favorites—to offer some tasty options that should be enjoyed by everyone, vegan or not. Fast food may not come to mind when you think vegan (maybe more hummus and carrot sticks for some of you?), but times have changed, and so has vegan food—and it’s brilliant. Ain Soph.Ripple offers a simple menu, in a small shop with a trendy feel down the backstreets of Shinjuku, and it hits the target market spot on.

With enough seating for about 12 to 15 people, the shop is friendly in a rough-and-ready way and even has an outside bench for summer. The larger central table and window counter means it’s perfect for all, from groups to lone diners, and fills easily. There are also charging stations on the tables which is an excellent bonus. Staff speak English and menus are in Japanese and English, so ordering is easy. You’ll be handed a little buzzer and can sit and chat until your food is ready.

The menu is relatively small, focusing on burgers, burritos and salad bowls, with a couple of sides and dessert options, but every single thing on it is vegan. This comes as a welcome relief to those of us who are tired of quadruple-checking ingredients with staff before being served a meal, which oftentimes just has slightly less meat than before.

Prices range from ¥850 to ¥1,250 for burritos and burgers while salad bowls are ¥680 for a small and ¥1,200 for a large. These can all be turned into a set for an extra ¥200 which means added fries or soup. Sides include mac and cheese and cheese fries, which aren’t included in set options (unfortunately) but are pretty delicious if you fancy a treat. There is a small selection of beers and fancy fruit drinks, but they do get somewhat pricey (depending on your definitions), so the free water is always a solid option.

We opted for the burgers and added the fries, and waited (by our own admission impatiently, but we did our best to distract ourselves) until the burgers were ready. At the rude buzz of our pagers, we practically jumped to the counter (it had been a long day and we were, by this point, officially hangry), but one look at our dinner made everything better.

The Cheese Ripple burger tastes as good as it looks and we would happily have eaten three more. The texture is great, there’s avocado, it’s full of sauce and the cheese actually tasted like cheese (top fear = bland cheese). While decently sized, the portions aren’t massive, leaving us wanting dessert… which is a good problem. With waffles and French toast to choose from (also available to take away) as well as a selection of cookies and other treats, you won’t be struggling for options.

Despite the small-shop feel, this is actually part of bigger vegan chain Ain Soph, with Journey and Soar branches doing set and course meals, but at higher prices for much fancier food. If this sounds more like your scene, they are in Shinjuku and Ikebukuro and go as far as vegan champagne(!) with lunch menus offering a more affordable option. Ripple seems to be a side venture targeting a younger crowd with cheaper, simpler menus—and it hits the spot well. If it weren’t for the face-stuffing and sauce everywhere (these burgers are not a delicate endeavor, be warned), we would have felt quite cool.

Vegans, rejoice. And non-vegans, rejoice even more because you never knew vegan food could taste this good, and you might not go back.