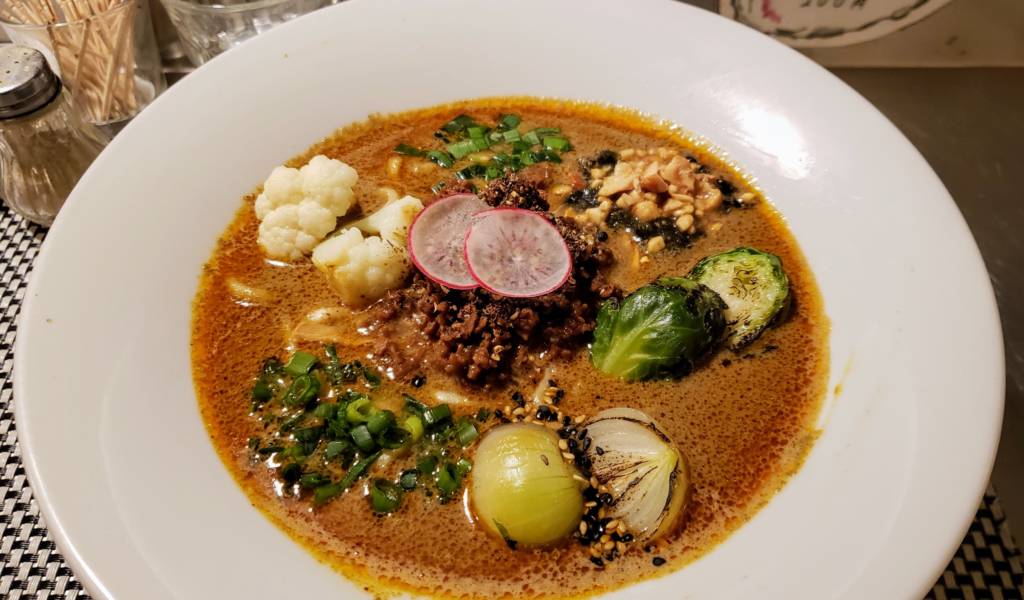 The 5-Step Guide to Being Vegetarian/Vegan in Tokyo

No doubt you’ve realized being veggie in Tokyo is more than tricky, and going vegan is downright difficult, but things are a-changing, we promise.

Whether it’s the secret ham hiding in every dish or being told “Shrimp doesn’t count!”, it can be pretty tiring constantly checking menus or ingredients lists and battling with waiters or chefs who are reluctant to remove that bland chicken breast from the salad. Luckily, Tokyo’s food scene is adapting (slowly). And while it’s still nothing like you’re probably used to, there are some great options to kill your cravings without killing anything else.

Pro tip: Consider booking a vegan foodie tour to get to grips with all this, and get a good meal too.

Being a vegetarian (or vegan) is not an accepted lifestyle yet in Japan and there are two things that make it difficult. Firstly, meat was highly valued as a black-market item following the war, and the shine never really wore off, so pretty much every dish has a topping of fish flakes, ham, chicken or whatever—even if it adds nothing to the dish (looking at you, poor-quality ham).

Secondly, Japan’s number-one societal rule is to avoid causing problems for others, so arriving at a restaurant and asking for substitutions is unheard of (you may notice set meals and course menus are very common)—aside from allergies and religious restrictions which are seen as unavoidable.

Basically, being a vegan or vegetarian is seen as your choice and therefore your responsibility, not the restaurant’s—so they won’t always be willing to make changes to suit your lifestyle. It’s not rude, it’s just a different view, which you will have to adapt to. Restaurants here tend to focus on one dish or style and spend years perfecting it, so to arrive and request changes to a meticulously tuned recipe is tough. You surely came because you wanted their specific dish—if not, then why not go somewhere else?

Like we said, it’s different perspective to most places, so try not to get frustrated with it. This is where your personal preference kicks in—if you’re a hard-liner you’ll have to accept that you can pretty much only eat at specific vegan/veggie places, but if you’re flexible (i.e. willing to pick ham out of a salad) you can manage regular restaurants a lot easier.

For vegans: Luckily cheese and dairy are not core parts of traditional Japanese cuisine, although they are gaining in popularity. If you avoid the meat, fish and egg, you’re pretty much safe when it comes to traditional dishes as milk and cheese are rarely involved. Soy milks and alternatives are becoming easy to find in supermarkets, but are not common in cafes yet.

Being strict at home is probably pretty easy, but here you might have to make a few decisions about your flexibility. This is best to consider beforehand so you’re not caught in the headlights of a chef’s intense stare and left regretting the decisions you’ve made later on. Also, if you decide ahead of time, you can research restaurants you should visit or meals you can safely eat, making the whole process easier. Luckily, dairy is not as widely used as it as in European cooking, so it’s easier to avoid, but eggs are trickier.

To dashi or not to dashi

Being veggie or vegan here is made much more complicated than just avoiding sushi thanks to our ubiquitous frenemy dashi. A stock which forms the fundamental base of traditional sauces and staples like miso soup through to okonomiyaki (often, not always), it uses kelp and katsuobushi (dried fish) to form the distinct umami flavor that Japan is famed for. This is the biggest hurdle as it’s in a lot of stuff, not always listed and not viewed as “fish” per se. If you’re strict, you’ll have to specify every time and mainly eat at specialized restaurants to avoid it. Alternatively, you can accept the occasional dash of the stuff in your meals and experience umami—the choice is yours.

You will also have to make decisions about food contact—as there will often be secret ham, sly whitebait and full-on unabashed pieces of chicken waiting to ruin your veggie option. If you’re willing to remove them yourself and carry on, life will be easy, If not, learn your lingo (see Step #3) and get very specific when you order.

Step #3: Key kanji to get you through

While Google Translate is a great sidekick in this city, learning some kanji yourself and simple phrases will make things a lot smoother. Lots of menus are still handwritten and don’t translate well, so spotting a few key kanji can save the day.

Here are some of the most common and sneakiest to look out for:

Also, remember there are exceptions to the rules too. For example, umeboshi (pickled plum) contains the kanji for meat, but no actual meat and shiso contains the kanji for fish, without the actual fish. Some words like chicken and seafood are easily recognized in English, but you’re better off using the Japanese for the others.

When it comes to speaking, we have a handy guide to ordering in Japanese including a section on dietary requirements.

The wonders of modern technology know no bounds, especially when it comes to finding the best local veggie/vegan options in Tokyo.

This has got to be the number-one go-to app for finding vegan and vegetarian restaurants in Tokyo. It’s a full and up-to-date directory of all the best spots to eat with details, reviews and notes about options. This is great if you find yourself in a new area and are hungry, or to browse through when planning ahead. This is a particularly great if you’re in a mixed group as it shows regular restaurants with vegan/veggie options as well as those catering specifically, so everyone’s happy.

It’s simple, but it’s worth a mention as the recent overlay function can be great for menus (when printed). While some of the translations aren’t perfect, they usually give you an idea of what to expect. Alternatively, the handwriting function allows you to enter your own kanji and the speaking function can help too. Remember to download the Japanese language option before you arrive if you won’t have wifi access in Japan though!

Because there is a Facebook group for everything, there is the Tokyo Vegan/Vegetarian Friends Club group and it’s a huge resource. With pretty strict posting rules to keep it in line, the content highlights new openings, changes in conbini food, shopping tips and more. If you’re thinking of posting a question, be sure to search the group first—pretty much every thing has already been asked, many, many times, so past posts can be a gold mine.

If you’re after more apps, then we have a review of the best including food, travel and translation to consider.

With all the above knowledge eating out can be easy—just know what to look out for! Obviously vegan or veggie signs are great, but still check about ingredients, as your stipulations may differ. English menus can suggest more flexibility, but is by no means a guarantee.

In addition to sticking with specifically veggie/vegan friendly spots, there are some dishes you can order in regular izakaya and restaurants too with confidence. Aim for dishes like tempura or kushikatsu as they have individual items on skewers so sticking to veggies is easy (but if strict you may want to ask if they use the same oil).

Tempura Tsunahachi Rin in Shinjuku, for example, has a vegetable-only set on their menu. You can also order okonomiyaki (if you’re veggie) which is prepared fresh, so ingredients can simply be removed before cooking (check about dashi though).

In izakaya restaurants, try the myriad tofu dishes, seasonal vegetables and staples like pickles and rice to get you through. The traditional Buddhist cuisine of shojin ryouri is entirely vegetarian and often vegan as it relies on beans, vegetables and seasonal ingredients. It is pricey though, so not an everyday option.

Ramen is one of the must-try Japanese dishes, and luckily there are quite a few places to try a vegan version. The most famous is T’s Tantan in Tokyo station, while Soranoiro Nippon is another option nearby. Afuro has started offering a vegan option at their restaurants, and although some ramen is more like a vegetable broth (the latter two, in my opinion), some can be pretty convincing.

If you’re looking for an international mix, the Ain Soph brand has proper restaurants (Ain Soph Ginza, Journey and Soar) and a great burger place (Ain Soph. Ripple)—all of which offer delicious entirely vegan menus. Nataraj is a vegetarian Indian chain with plenty of vegan options and locations in Shibuya, Ginza and Harajuku. For the Falafel failsafe we recommend Kuumba du Falafel in Shinsen or Falafel Brothers in Roppongi—both are vegan and super friendly.

If you’re keen to try some high-end dining we have all the most affordable Michelin-star spots too!