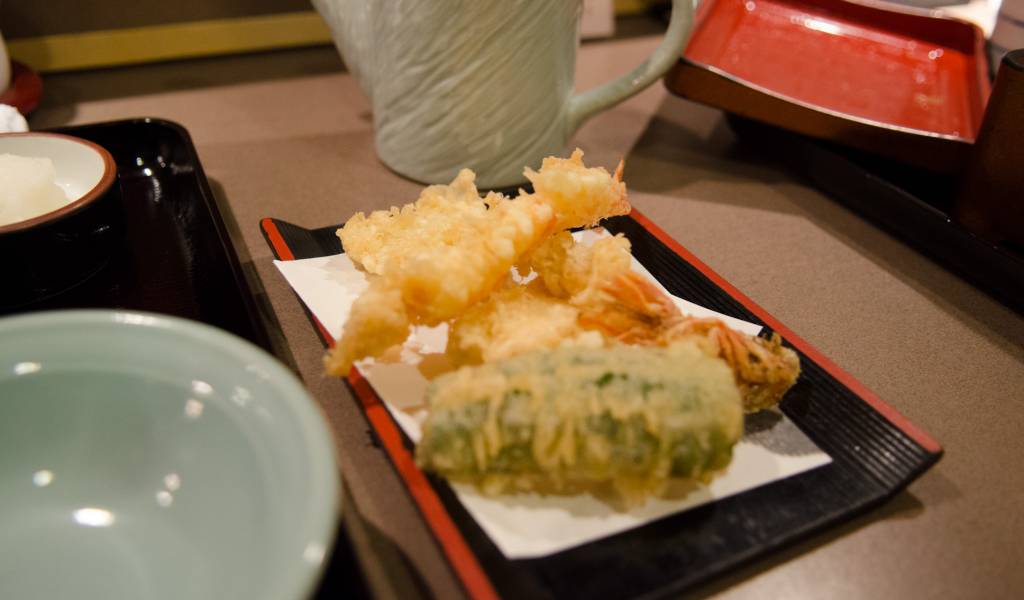 Tempura, adopted in the 16th century and elevated to a Japanese delicacy, can be a tricky beast. Whilst the ‘deep-fried’ part can conjure images of cold, oily tempura-nightmares — done fresh and done well, it can be a delight. Although there are plenty of great low-budget options, if you want to impress someone or try the higher-end experience, there’s another (still affordable) option.

Founded in 1923 by a young Kyuzo Shimura, Tempura Tsunahachi quickly gained a reputation for the freshest ingredients and highest quality tempura in Tokyo. Favored in the past by Kabuki actors, baseball players and celebrities, the standards are high, but the prices are not (well, not if you go for the set lunch anyway). Starting at ¥1,540, this is a perfect example of the cheap-lunch golden rule. Now with a main restaurant in Shinjuku, four in department stores across the city and spots in Sapporo and Kyoto, there’s no reason not to pop in.

With a moderate queue starting just before opening at 11 a.m., the busy main restaurant was easy to spot and looked faintly out of place in the busy Shinjuku street due to the traditional wooden porch and noren. With a general belief that in Japan a queue means something worth waiting for, we joined and were ushered inside fairly soon. The restaurant has two counter areas and regular tabled areas, but I would definitely recommend the counter which gives a great view of the chefs in action.

The typical lunch set is seasonal and has a combination of white fish, shrimp, vegetables and kakiage — the fritter-like mixed veg, often with shrimp. The menu is extensive however, and additional items like eel can be added, although this can get you into dangerous territory price-wise! A vegetable set is also available which is a little pricier but genuinely doesn’t involve secret meat or fish (apart from the soup) which is always nice.

The joy of Tsunahachi is in the small things. What could have been a basic set with nice tempura becomes a mini-feast. Served with fluffy rice and green pickles, miso soup, snowy grated radish and tentsuyu dipping sauce, the quality is just high, there’s no other way to say it. There are two stand-out highlights: rich and filled with tiny clams, the soup was definitely some of the most delicious miso I’ve tried, (even leading me to try and steal my brother’s when he wasn’t looking, much to his annoyance). The second would have to be the salt-selection. Along with the regular sea-salt there were wasabi, shiso and konbu options which are great to try-out.

“All this and she hasn’t even got to the tempura!” you’re thinking, well I apologize, but it is as worth the wait as it is in the restaurant itself. Made fresh and placed in front of you piece by piece, it is light, crisp and so far away from the greasy nightmares of past tempura that you would hardly recognize it. The seafood and vegetables were cooked perfectly, a nice amount of bite in them and fun to combine with the different salts. The kakiage were a good test, as they can often be the most oil-heavy, but they too were light and very crispy, with the vegetables standing strong against the batter. Also, if you’re not sure about tempura etiquette, they provide a great little guide about how best to enjoy your lunch, so don’t be shy.

I’ve heard complaints about small portion sizes bandied about, but personally, we had no issues, with the only concern being does it have to stop? (The answer, sadly but probably in our best interests, was eventually yes). This may be due to the vegetable set receiving more pieces, so that might be a good option if you’re looking to bulk out your meal.

I was too full, but there is a dessert option of tempura ice cream which I will definitely be trying out next time, (if only to crane over and watch the very serious chefs making it). They are well worth watching, by the way, and although they look very serious, they are all smiles if you compliment the food (and who wouldn’t).

If any downsides existed, I would say that the staff could be friendlier, which I have heard from others, but they were by no means rude, just… slightly brusque? Although I noticed a definite lightening when I tried my (admittedly awful) Japanese, so I think it’s the effort that counts here.

So, in a tempura-coated clam shell: arrive at 11 a.m. to slightly beat the queues, bulk up with the veggie option, sit at the counter, be adventurous with salt and try out some Japanese if you can. All in all, a fancy tempura experience worthy of the A-listers of the past, at a price even today’s z-listers could manage.