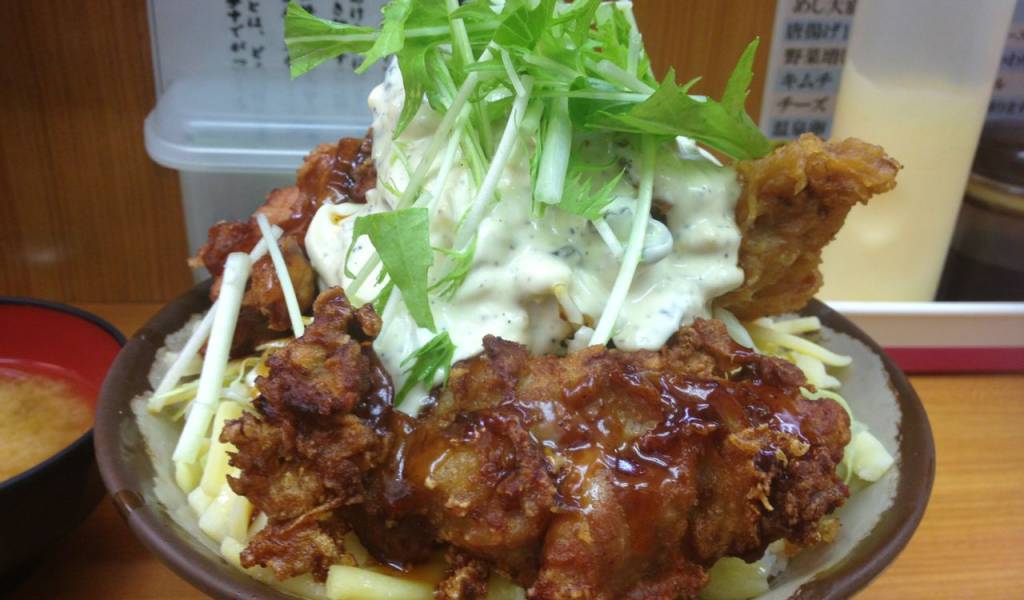 Gyudon, thinly sliced beef on top of rice, is one of those ubiquitous foods in Japan. It seems like there is a Yoshinoya, Matsuya, or Sukiya near every train station in Tokyo, but …

While these are great places to grab a quick meal on the go, I find myself going to them out of convenience.Whether I would be on the way to a station to go somewhere or coming back home on the last train, these were usually the quickest and sometimes only options for a sit-down meal. After the initial honeymoon phase of living in Tokyo began to wear off a few months in, I was no longer fascinated or satisfied by a lot of the food options near me. Luckily, I had a classmate who went to International Christian University (ICU) and was familiar with the Kichijoji area, and he recommended that I check out Kichijoji Donburi. I have been hooked ever since. Even after moving out of the neighborhood, I find myself catching the train out to Kichijoji about once a month just to go eat there. 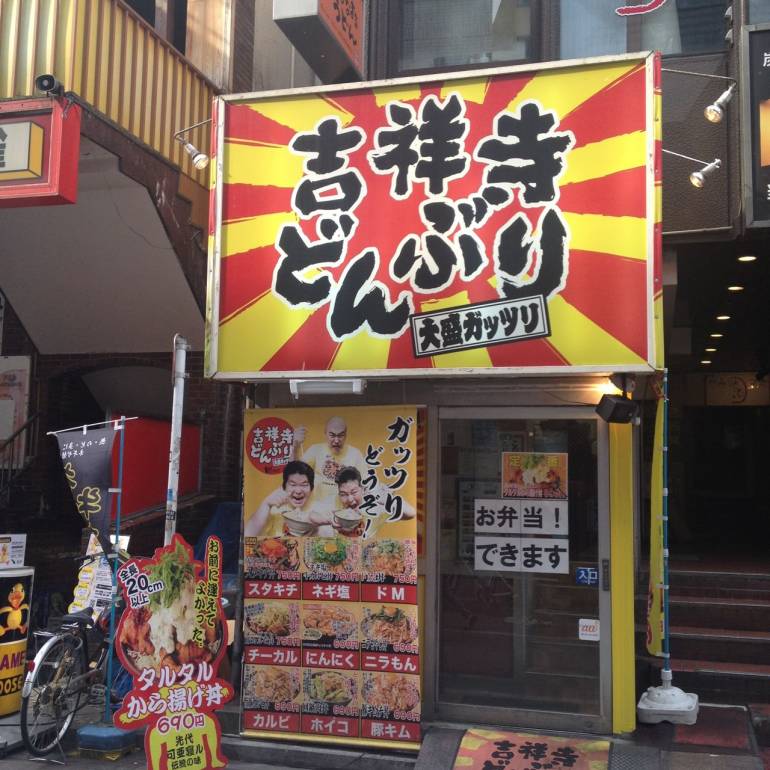 While it is far from being the cheapest place for gyudon, each bowl is cooked up fresh with your order, as opposed to being scooped out of a chafing dish like some of the other places tend to do. On top of that, the already large portions can be increased to your liking. Instead of simply ordering omori (a big portion), you can choose to upsize your meat, vegetables, or rice individually. Meat can be doubled – 肉増し nikumashi (150円), tripled – 肉がっつり niku gattsuri (270円), quadrupled – 肉闘魂  niku toukon (“meat fighting spirit”) (370円), with the biggest option being the 破壊王、hakaiou – “King of Destruction” option (600円), which comes with twice as much rice, five times as much meat and weighs 1.6kg! Apparently, those who successfully finish a hakaiou receive a certificate of completion. As someone who up until recently ate a lot, I can say that even just asking for nikumashi is more than enough. 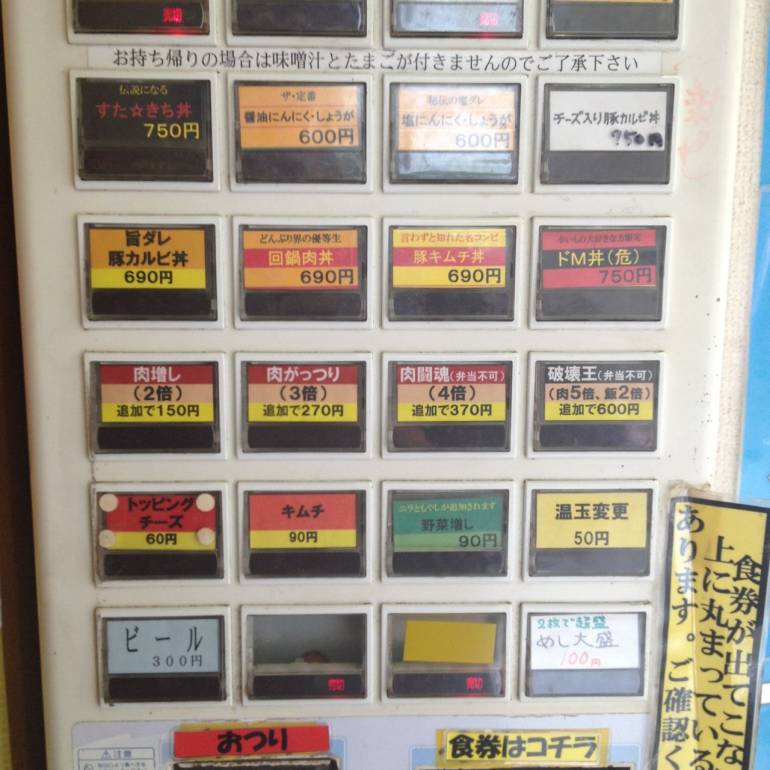 Kichijoji Donburi is a straight-forward no-frills sort of place. You walk in, place your order at the machine, take any of the seats at the L-shaped counter and wait for your food to be prepared right in front of you. Water is self-service courtesy of a machine at the top of the stairs as you approach the counter. While your food is being cooked, one of the staff will put a bowl of miso soup and a smaller bowl with a raw egg in front of you. 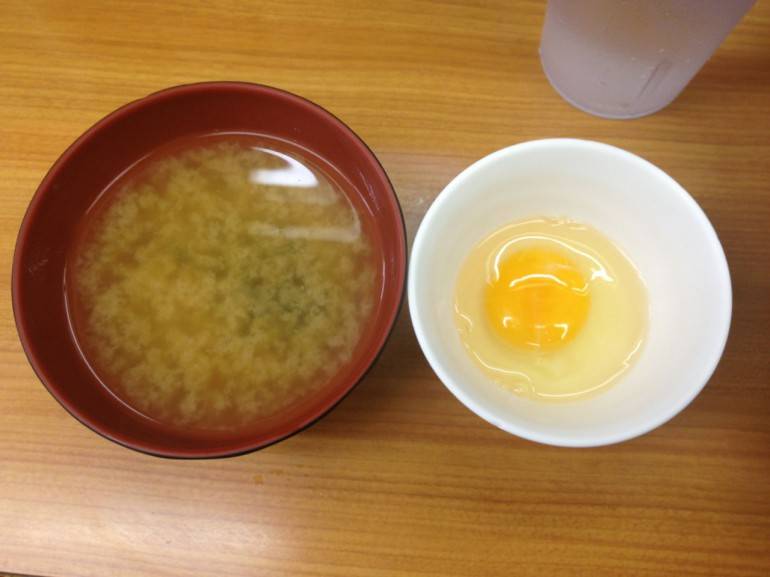 The miso soup is nothing spectacular, but having it included in the meal is nice, especially on a chilly night. Consider it as being around the same level as the miso soup at Matsuya, minus the agedofu (fried tofu). Do what you like with the egg. I have seen some beat the egg and pour it onto the leftover rice when the meat is almost gone. I usually dig a little hole in the rice and plop it right in the middle of everything and cover it with mayonnaise and shichimi (the colourful mix spice) before I start eating. If you plan to do this, make sure to dig a hole or the raw egg will surely slide off the top of the meat and onto the table. This is exactly what happened the first time I went there. In the rare chance that you run out of meat before you finish the rice, there are containers of tsukemono (pickles) to use freely as well as mayonnaise, shichimi, soy sauce, and other condiments. 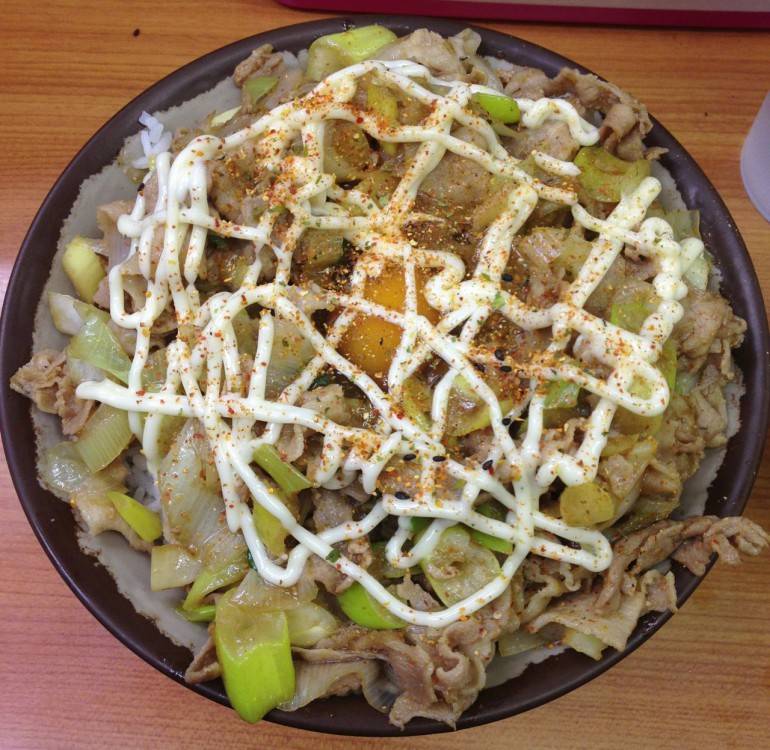 The basic gyudon comes in either salt or shoyu (soy sauce) flavors with the option of garlic (ninniku) or ginger (shouga) for 600 yen. There is only one button for salt and one for shoyu, so you must specify if you want garlic or ginger when you present your ticket.

One of my personal favorites has to be the Negi Shio Gyu Kalbi Don (750 yen) which is basically green onions, salt and beef cooked in a kalbi (Korean BBQ) sauce with a sprinkling of sesame seeds. It is also quite good with cheese. For maximum results, ask for them to put the cheese on top of the rice, but under the meat.

The karaage don (690 yen) is a good option for those not in the mood for beef or pork and is well worth it. Six pieces of deep-fried chicken come piled on top of a bowl of rice. It does not come with a raw egg, but does come with an additional plate for you to put the chicken on, so that you can get to the rice without sending any of the chicken tumbling off of the counter.

Upon handing you your order, the staff member will say to you gattsuri doozo (literally, “eat with all your might”). While not as fancy as many of the chain gyudon restaurants, Kichijoji Donburi is not without its charms. The music is a varied selection of Japanese pop and the walls are covered in amusing screenshots from anime or broadcast television, most of which urge the customer to eat more, as well as pictures of their recommended menu items. 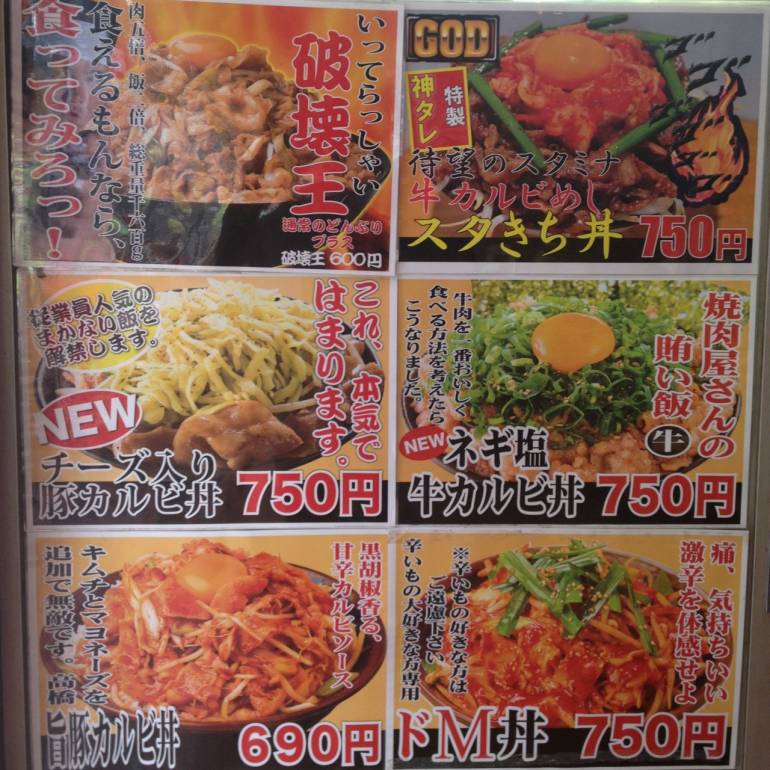 Kichijoji Donburi offers a free student discount card which entitles the holder to 1) nikumashi (double meat, 2) oomori (double rice), or 3) a smile, as long as they show it when they place their order. All you have to do is tell them that you want the card and show them your student ID. The “card” is printed on a paper the size of a reciept, so do be careful not to accidentally throw it out. Keep in mind that the nikumashi option does not apply to the Karaage Don when using the student discount card (yes, I tried).

Kichijoji Donburi is a two-minute walk from the Park Exit of Kichijoji Station. Upon exiting the station, turn right and walk straight ahead and you will see it on the right. If you find yourself frequenting Yoshinoya, Sukiya, or Matsuya and consider yourself a fan of gyudon, you owe it to yourself to check out Kichijoji Donburi the next time you are out west.