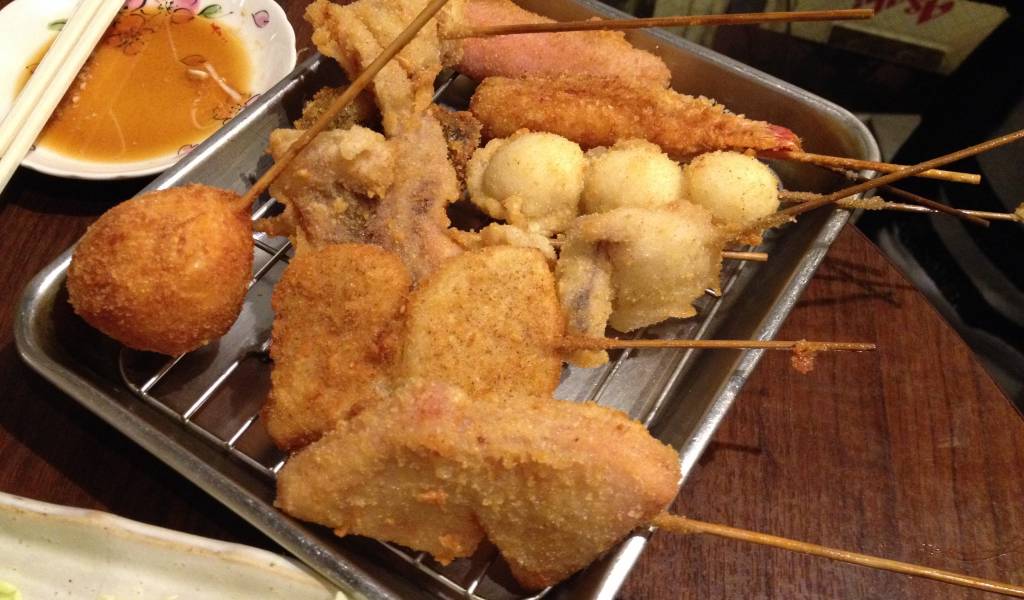 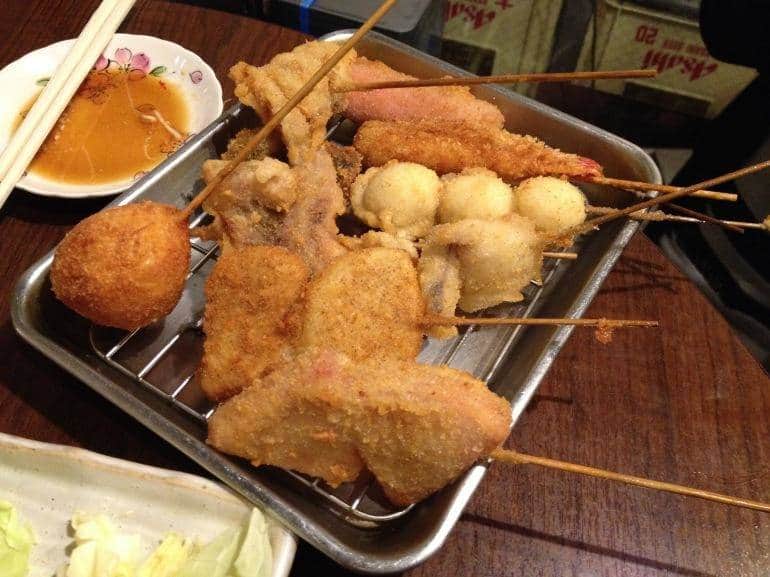 Unfortunately, there are as many restaurants selling bad kushikatsu (think oily pieces of tough meat and still-raw vegetables) as those selling the good stuff (think light and crisp, bringing out the natural flavors of the ingredients).

Just below Suidobashi Station, there is a hidden gem of a store called Hero. Opened in 2006, Hero serves both kushikatsu and sashimi, both equally good, both equally cheap. The store is quite small for an izakaya, and only has a few tables for customers to share with each other. It’s a tachigui restaurant – tachi means to stand, and gui means to eat, which means that you actually don’t sit down in this restaurant. 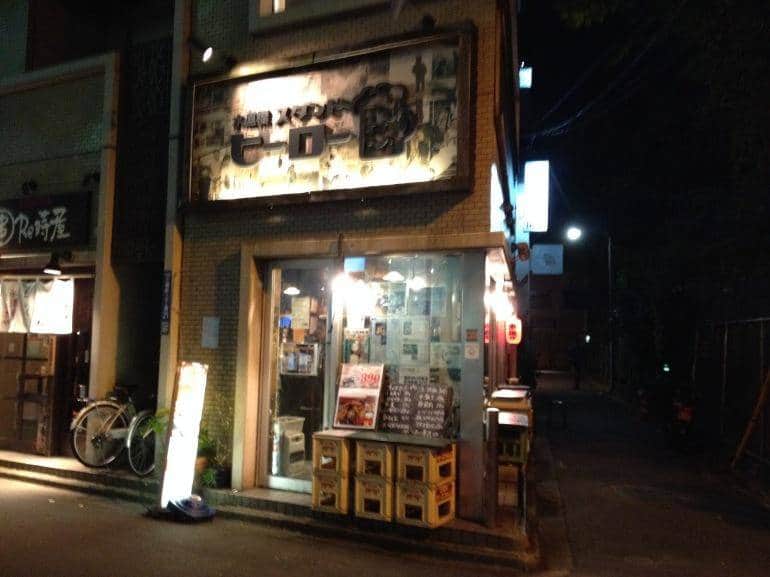 On the day we visited, it was freezing outside, and we were desperately craving deep-fried food and a cold, cold drink. Why a cold drink on such a freezing day? It’s similar to the feeling of eating ice cream in winter or in an air-conditioned room. It feels quite… rebellious. Add to that fried food? Positively fiendish.

To make-up for what we knew was going to be a high-calorie dinner, we ordered two side dishes – standard izakaya fare: Hiyayakko (Cold Tofu) and Miso Cabbage. As it turned out, the portions were about twice the size of what I usually see! 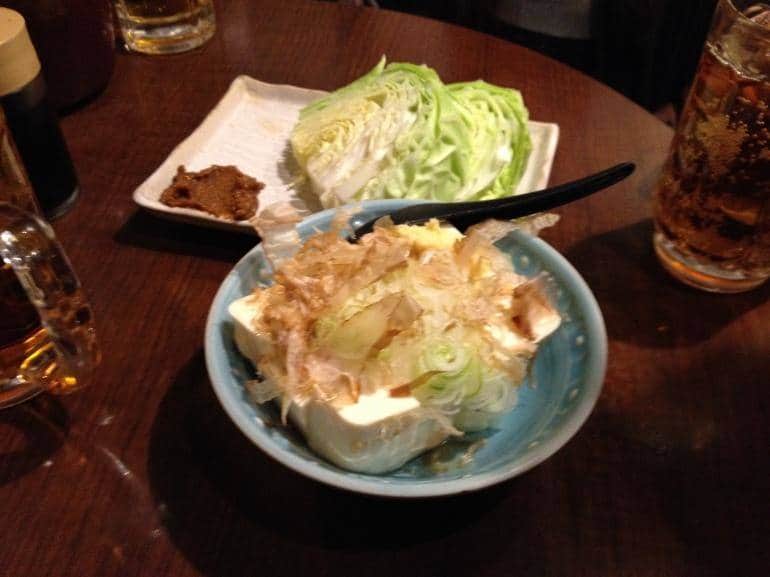 We then ordered the “10 pieces assorted (which differs every day) kushikatsu“, which came in no time. Again, the servings were big compared to the average kushikatsu you see in other izakayas. The kushikatsu (1080 yen for the set of 10 sticks) was fried to perfection and served hot and fresh, with the bread crumb coating soaking up the tare (sauce) that we dipped it in. A good tare is a restaurant’s life blood – and this stuff was great. Biting into the kushikatsu, the sweet, salty, sour, and spicy (if you add a sprinkling of shichimi togarashi) of the tare bursts in your mouth, followed by the natural flavor of whatever the main ingredient of the kushikatsu is. Kushikatsu tare is quite salty by itself, so it is good to wash down all the oil and saltiness with that mug of cold beer (but do we really need more reasons to drink?). 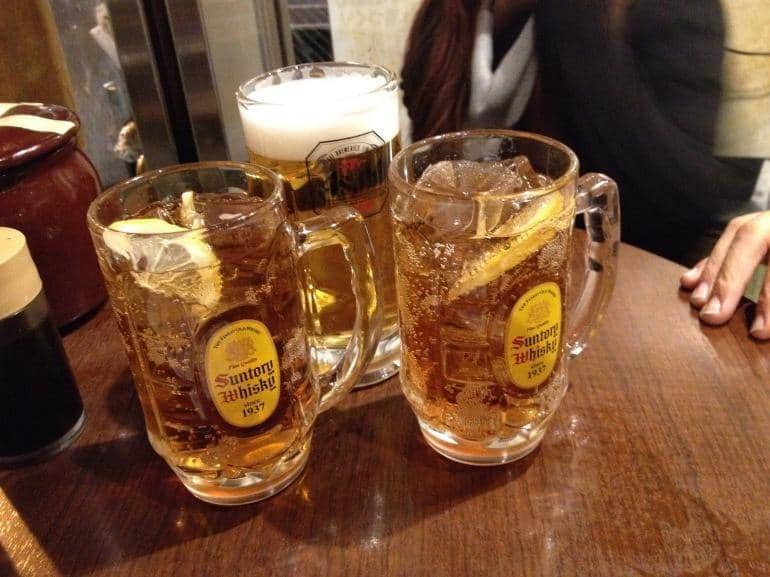 The best-seller at Hero is their torichiizu-gushi (Chicken Cheese Stick – 150 yen per stick), which is basically a ball of chicken meat stuffed with cheese and deep fried. The cheese melts inside as the chicken cooks, making for a yummy combination. For sashimi, ask the staff what their special for the day is as their seafood is fresh and bought on the day.

For the two side dishes, plus the 10 pieces of kushikatsu and three drinks, our total bill came to just 2380yen.

Cheapo tip: It is best to bring a friend who can speak Japanese, as the menu is all in Japanese. Be prepared to order in a loud voice, be prepared for loud noises, and forget about personal space! That’s part of the fun!

Access: From the East Exit of Suidobashi Station, walk out to the right along the station, go past the two ramen shops, and you will see the store to your left.