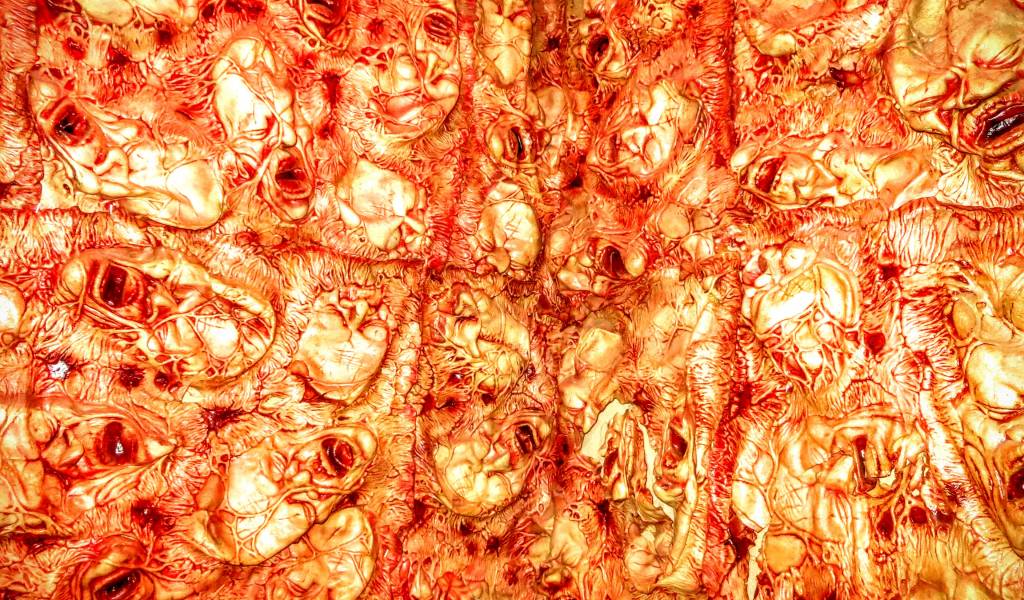 Tim Burton movies have done a good job of showing audiences that death, darkness, and the underworld might not be so scary, after all. In the same spirit (pun intended!), the scary (but in a playful way), wacky, and quirky Yurei izakaya in Kichijoji promises a fun time in the underworld, whether it’s for a birthday (or deathday) party or a random night out.

Who knew that the underworld was just a short walk from Kichijoji Station? Yurei is located in a quiet alley behind the Marui department store, close to Don Quijote. The rest of the alley may not stand out much, but you’ll definitely spot this spooky bar by its morbid decor and the eerie chant emanating from the place. Go down the stairs, and—is that a chainsaw you hear?—in you go! You’ll then be greeted by waitresses dressed as Japanese ghosts (plain white kimonos with the right side over the left, and triangular white headbands), who are strangely perky and cutesy for ghosts. Now, you have a maximum of two hours to spend in the underworld; otherwise, you can never leave—or so they say (read: as fun as Yurei is, you can only spend two hours there).

It should then be quite evident that Yurei is more spooky fun than just plain spooky. Its name should already be pretty telling. “Yurei” is the Japanese word for “ghost,” but instead of using the actual kanji for that term, Yurei uses similar-sounding kanji that mean “play” and “beautiful.” Also, while its name will make you think that it just pays tribute to Japanese ghosts and yokai (creatures from myths and folklore), it isn’t limited to that, as there’s a mish-mash of creepy elements all over the place. It isn’t just ghostly waitresses that greet you; as you are seated, a giant spider will come down from the ceiling to serve as your creepy-crawly new friend for the night. To call the waitresses, you’re supposed to strike a Buddhist prayer bowl and hold up a bloody, severed hand. You’ll also notice that there’s a coffin in the premises; what could be in there? And not even the bathroom is safe, as you might feel watched in there because…

As for the food and drinks? Priced not too differently from other izakayas (around 340-1620 yen for food, and 430-972 yen for drinks), most menu items are your standard izakaya fare (not bad but nothing out of the ordinary), but with a slightly creative twist in that they’re given horror-themed names, such as Ghost’s Eyeballs for fried quail eggs and Tomorrow’s Murder for fried bulbs of garlic. (Cheapo tip: visit Yurei with at least one of you in costume, even if it’s just something like an over-sized silly hat or cat ears, and your group gets a free dessert!) The drinks are also nothing special, but Yurei has a cutesy gimmick: when you’re served your drinks, your waitress will ask you to say “Namu!” (a nod to the Buddhist chant, “Namu Amida Butsu”) instead of the usual “Kampai!” or “Cheers!” because they’re playfully irreverent like that.

If you want to have some fun with friends, try the Russian Roulette. It’s 162 yen (150 yen plus tax) per try, and involves each person getting some finger food all at the same time. The stinger is that one piece is filled with wasabi, and the poor fellow who gets that piece gets a triangular headband similar to what Japanese ghosts wear. Apparently, if you walk from the station to Yurei wearing that headband on your next visit, you get a free dessert (although how they’ll know, we have no idea). The loser can also take revenge by ordering successive rounds of Russian Roulette.

The must-try at Yurei, though, are its Cremation Pyre Spareribs (around 929 yen, including tax), named such because they’re doused in alcohol right in front of you, after which they burst into very high, vivid flames. This is one item that you can surely find on all of Yurei’s course menus, and not only is it a spectacle to behold (the staff even encourage you to prepare your cameras beforehand!), but it’s also delicious, juicy, and tender. The only (minor) complaint that this author and her friends had was that they were left wanting more afterwards!

Birthdays are also a fun affair at Yurei… except, over there, your birthday is also your deathday! You just have to tell the staff that it’s your birthday (no need to call them in advance, though that would be much appreciated), and you’ll get a birthday treat on the house. First, a waitress will solemnly announce to everyone in the bar that Mr./Ms. so-and-so died in an accident… after which a cheery birthday song plays, and you get this jello brain for the zombie that you’ve probably just turned into:

Unfortunately, that’s just for photo ops. What you really get is some ice cream, which, according to the backstory, is supposed to be your entrails. Congrats, not only are you a zombie, but you’re also a cannibal now! Apparently, entrails taste like vanilla ice cream. If you’re weirded out—well, we did say that Yurei Bar is pretty wacky! Harry Potter‘s Nearly-Headless Nick ain’t got nothing on this deathday party.

Oh, and that coffin we mentioned earlier? Yes, you can try climbing into it, but you’ll have to ask the staff first, as they’ll hold a funeral for you, complete with faux-Buddhist chanting. Your friends are free to take as many photos and videos as they like, but the staff don’t want to ruin the surprise, so they urge you to keep any photos and videos for your personal consumption. We’d like you to find out what Yurei’s funeral “service” is like for yourself, so have a photo of the coffin instead:

This author comes from a country with many religious people, so where she’s from, a bar that borrows and playfully uses religious elements is bound to attract controversy. But as far as a waitress that this author spoke to knows, no one has cried foul over Yurei’s use of Buddhist elements so far, fortunately. It’s probably a testament to how many Japanese have a sense of the spiritual but are not particularly religious.

That said, if you have a good sense of humor (enough to withstand morbid jokes), head on over to Yurei for some crazy fun! It’s one of those few themed restaurants/bars that aren’t too expensive, and it’s got a lot of gimmicks to keep you entertained. This author has made trips to and from the underworld, er, Yurei, twice and has always returned safe and in one piece. No, she’s still not a zombie, and yes, she’d gladly return to Yurei and bring a friend to experience the quirkiness of it all.