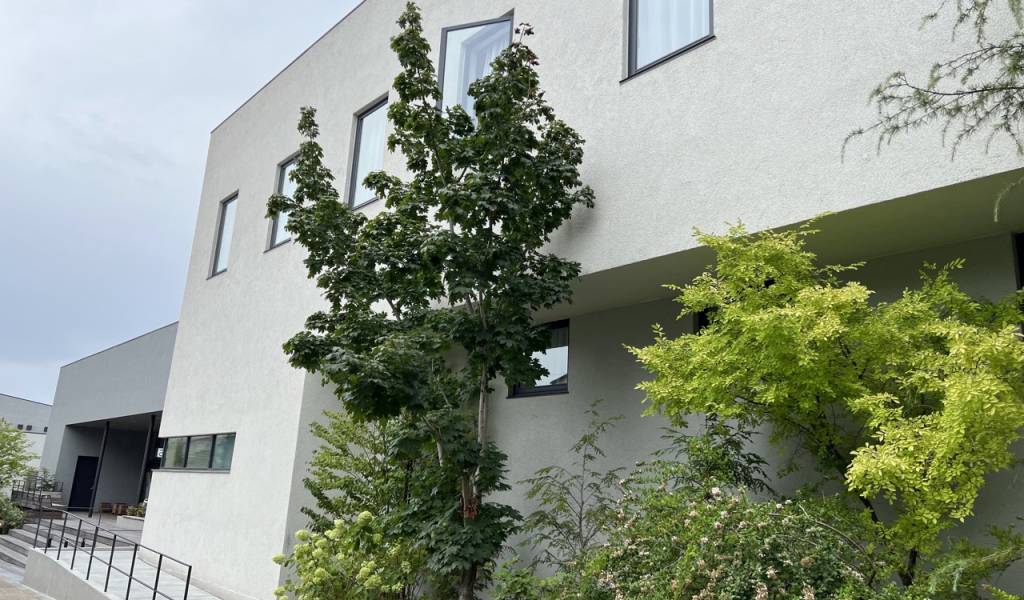 Mustard Hotel Shimokitazawa is an excellent choice for younger travelers who don’t need the fuss of an expensive hotel, but want a comfortable room in a great location for nightlife, art, culture and shopping.

Unfortunately there’s no mustard available at Mustard Hotel, so you’ll have to bring your own.

Mustard Hotel is smart and minimalist, with contemporary vibes and a modern build (opened in 2021). The staff are down to earth, friendly, and they have fluent English speaking staff members at reception. The staff were very accomodating — we made a mistake with our non-refundable booking and they changed our dates without changing the price.

The hotel has few facilities. However, each room comes with an ION record player and a “record library” in the lobby from which you can borrow records to play in your room. This is a fun touch, although those with audiophile tendencies might be somewhat triggered by the wow and flutter from the rather cheap ION turntable.

There are roughly two classes of room, the standard and deluxe. The standard rooms are compact, but not tiny — there’s enough room to comfortable store your luggage and hang your clothes. The rooms have a smallish window, bathroom, a small desk and a nice bed. Out of the standard class, the slightly more expensive standard B rooms are on the second floor with slightly larger windows and more light. Note that there’s no TV in the standard/superior rooms.

The Deluxe rooms cost more than twice the price of the standard rooms, but they have way more space, a TV and some have a balcony attached.

There are no single rooms. All rooms are either twins (or bunk beds), or doubles.

The air conditioning is adequate and there are enough power outlets to charge your devices. There’s a kettle in each room, but there are almost no amenities, just body wash, shampoo and conditioner — you can request more items from the front desk. The idea is that it’s better for the environment to bring your own toothbrush rather than use single-use items.

The standard and superior rooms range from 15m2 to 20m2, whilst the deluxe rooms are a spacious 50m2

The standard and superior rooms are a quiet place to rest or listen to records, but there’s not much space or any view to speak of. If you want to get some work done it’s probably nicer going to the cafe in the lobby.

The hotel has only two storeys, so there’s not much of a view to speak of. The rooms all have reasonable light as there’s plenty of space around the hotel and no tall buildings nearby.

Shimokitazawa is an excellent location with a nice variety of things to do. It’s a 5 minute train journey to Shibuya, and 10 minutes to Shinjuku. If you like a stroll it’s only about 40 minutes to the center of Shibuya.

Airport transfers are a little more effort as there’s no direct train or bus to Shimokitazawa, but if you don’t mind figuring out the train transfers the hotel is very close to Higashi-Kitazawa Station. If you’re arriving at Haneda, Shimokitazawa isn’t too far the airport, so it’s reasonably cost effective to use a private taxi service (this costs around ¥6,000).

Shimokitazawa station (5-6 mins walk) is well connected, with direct services to Shibuya and Shinjuku, plus access to the Tokyo Metro Chiyoda Line, which takes you to Akasaka, Hibiya and the Imperial Palace.

The hotel is in the heart of Shimokitazawa, so you have access to numerous shopping, eating, art, and entertainment options. It’s also very close to the Shibuya area.

There’s not a lot of green space in the immediate vicinity, but Shimokitzawa is a mostly low-rise area, so it has quite an open feel.

You’re probably best off not ordering the breakfast, as you can just decide on the day if you want to order a bagel and coffee at the hotel cafe for roughly the same price.

Mustard Hotel (and sister Mustard Hotel in Shibuya) is well suited for younger couples who want to spend most of their time out of the hotel and enjoying the delights of Tokyo, who will appreciate the great access to Shimokitazawa and the Shibuya area.

We don’t have any data on the building’s efficiency, but the hotel has a low waste (i.e. no disposable tooth brushes etc in the room ) and eco room cleaning policy — cleaning once every four days unless requested.