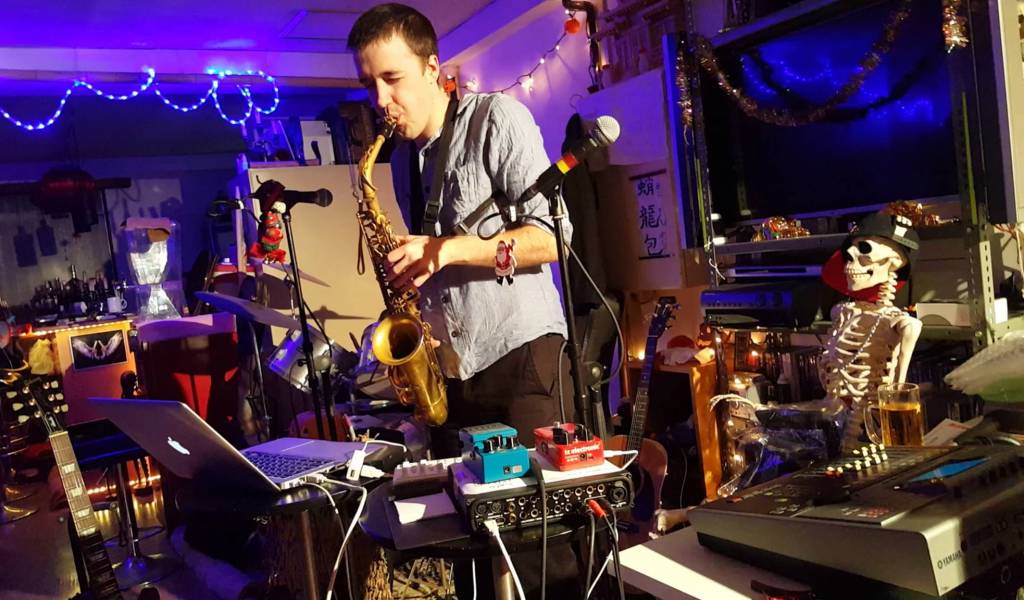 Interview with Smoke Thief: A Musician's Journey from Childhood to Japan

What’s it like realizing your dreams of becoming a successful musician in a foreign country? We chat with composer George Art Baker or “Smoke Thief” about his journey breaking into Japan’s music scene and his colossal success with his album Heart Beat Circuit.

A few sentences about yourself please.

I’m George Art Baker, a composer working for Brave Wave Productions. I moved to Tokyo 3 years ago, I love cheap sushi, kung fu and I’m a total anime/retro games nerd. I’ve learned most of my Japanese from anime, so I probably sound like a character from Cardcaptor Sakura. I jog around Tokyo, exploring little avenues and hidden vistas. I also study Wing Chun kung fu in Yokohama’s Chinatown district, so all in all, I’m definitely doing what teenage me wanted me to do, haha.

What brought you to Japan?

I’ve always gravitated toward music, from a childhood listening to Legend Of Zelda’s 8-bit glory to my teens where I lost 108 hours assimilating Nobuo Uematsu’s Final Fantasy VII soundtrack into some deep part of my soul. At some point I realised that if I could muster the energy to go outside, I could make music myself, so I went to uni and got my MA in Music Performance. After that I more or less unconsciously spent all my time watching anime and reliving the 90s on my friend T’dawg’s custom-built SEGA emulator…

I returned home and realized I wanted to move somewhere exciting, where I could find the opportunity to really grow as an artist and as a person. Japan has brought me the animation and games I most enjoy in the universe, so it seemed like a good place to go! I was lucky in that two of my best friends lived in Tokyo… and from day one they’ve been awesome in helping me find my way.

Describe a typical day for you.

I wake up and eat some granola  and wage battle against my email inbox. Then I either go for a jog or practise my Wing Chun… on a good day I will spend 3-7 hours in my home studio before meeting friends in the evening.  If I don’t go out I usually just try and learn a bit of Japanese by playing games like Pokemon.

What kind of musician are you?

Difficult question! I think I’m a very existential one, I wanna feel alive in this moment, and for me usually the best way to do that is to improvise. I understand notation but I usually prefer memorizing to reading… if I memorise the feeling of the melody that becomes more important than the rhythms or pitches, so I guess that’s why I suck at classical music, haha. One thing I like about music is, whenever you get in a rut or can’t solve a problem, someone else shows you a new way to go. In a sense, songs are like maps of some harmonic landscape, if you look at their chords, voicing, timbres, it tells you something about where that person went or is now going.

What musical project are you most proud of?

‘Heart Beat Circuit‘ represents everything I’ve worked towards over the last 17 years as a composer—I wanted to make a melodic record that earned a place in people’s hearts. Brave Wave founder Mohammed Taher, producer Marco Guardia and visual artist Aurahack (Eric Lahaie) and I worked so hard to make a record that people can connect to on a deeper level.

Reknowned game soundtrack composers Saori Kobayashi, Takahiro Izutani and Manami Matsumae brought in some wonderful elements that for me makes the album a lot more meaningful… it also gave me this sense of ‘Senpai finally noticed me!’, which was deeply satisfying as I’m basically an anime character.

What can the fans expect from you next?

‘Heart Beat Circuit‘ has really been a launchpad, skyrocketing me into some wild, stratospheric dreams. The latest of which is gaining official sponsorship from ROLI, probably the most innovative keyboard company on the planet. I’m now looking forward to using their Seaboard RISE as a tool to create and record the next album ‘Kodama’, a kind of nature-inspired instrumental hip-hop odyssey that features musical ideas derived from Japanese music traditions. This futuristic keyboard has some unique articulatory possibilities that will allow me to emulate string and woodwind instruments in a way that was impossible even a year ago.

The challenge is to make an album that’s as melodic as the last, but to also go somewhere new artistically… no one wants to hear something they’ve heard a thousand times before.  I’d started out just using vinyl, but I think sampling real ambient sounds and real Japanese instruments (as played and discovered by me) and playing them through the RISE is going to elevate it to become a more personal, evocative album.

Biggest challenge breaking into the music scene in Tokyo/Japan?

Tokyo’s music scene is oceanic, it’s just huge, and it’s not immediately obvious where you wanna go. You have to swim around, exploring different scenes until you find someone who can hear what you’re trying to do. I’ve been very lucky to make such good friends in the soundtrack, DJ, noise and both Indie scenes (Indie music and Indie game development!).

Your go-to spots for live music in Tokyo? Points if they’re cheapo friendly.

Andi Brooks runs a great show at Papera in Shinjuku-Gyoenmae called ‘Live From The Kitchen Disco‘, it’s basically a live music night in a great curry house! A tantalising combination! Entrance is basically free but you have to order one item off the menu (which can be 350 yen).

I’ve also started a live music night at 2Gun’s bar in Motomachi-Chukagai. It’s 1,000 yen entry for my night that runs twice monthly. It’s a cool little bar that’s a kung fu dojo by day and a bar at night! You can also eat Chinese food as cooked by a kung fu master, which I personally think should be on every kung fu movie fan’s bucket list!

“I don’t want to regret not having done something later.” – Cid (Final Fantasy VII)

Where can fans/stalkers find out more about you?