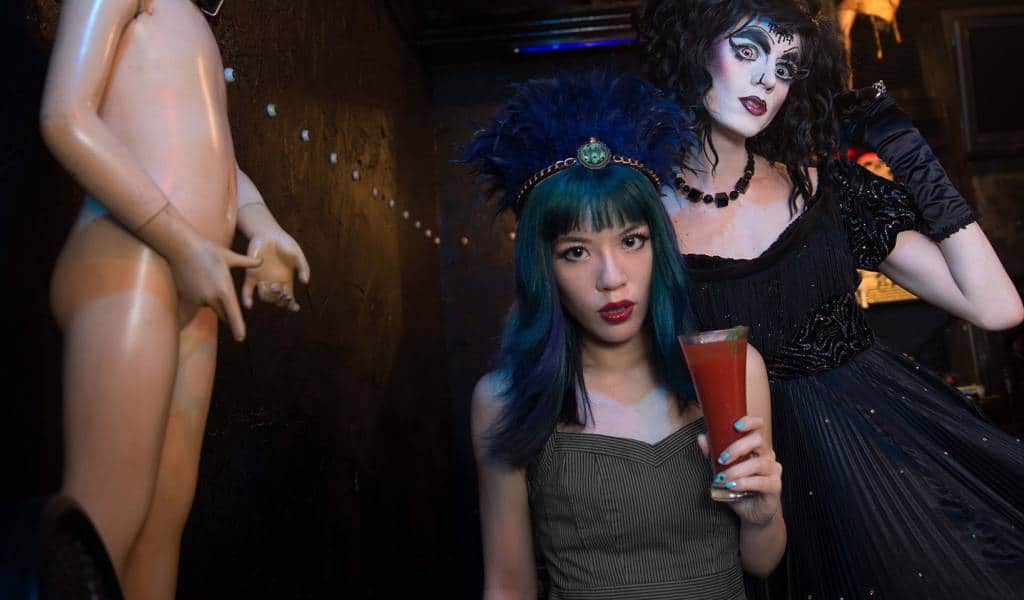 Tokyo's Goth Scene (Then and Now) with La Carmina

The mid-00s in Tokyo was the reign of the Gothic Lolita. One of a dizzying number of variations on the Lolita fashion trend, the Goth Lolis brought a dark edge to the floofy skirts, bell sleeves, lace, and ribbons that had — for reasons that are still generating academic papers — taken over the streets of Tokyo, and especially Harajuku.

And then, they disappeared. Or did they? In honor of spooky season, we sat down with La Carmina, one of Tokyo’s original fashion bloggers, to learn more about Tokyo’s gothic scene, then and now.

Teaser: It still exists (to a certain extent). So, for all the goth-curious out there, keep reading until the end because we have some recommendations courtesy of La Carmina.

La Carmina arrived on the scene in 2007, and began chronically her adventures trawling Harajuku for indie styles and hitting up underground parties on her blog, LaCarmina.com. What began as a passion project generated TV hosting gigs and book deals, including the just released The Little Book of Satanism: A Guide to Satanic History, Culture, and Wisdom.

Wait, Satanism? Yes, according to La Carmina there is a Satanic scene in Japan, which she touches on in the book and also more at length in this article.

For La Carmina, who had long been drawn to goth looks, the Japanese scene that she encountered in the mid-00s felt so much more expressive and vibrant than scenes she had experienced elsewhere.

“I guess one good example, fashion-wise, in the clubs I went to in say L.A. or N.Y., you’d see people in latex or fishnets — the kind of stereotypical goth look, dark eyeliner. But in Japan you might see people in these tremendous rococo dresses and make-up with decadent eye lashes. They’re just done to the nines in such a fascinating way to me. I was really drawn to the aesthetics. Sometimes the clothing was more modest but also more expressive. Or handmade.”

To put things in context: back then there were no smart phones, so good luck finding venues. Social media was practically still just Myspace and Mixi. Getting involved in a scene required a certain amount of legwork, like tracking down event fliers from independent boutiques in Harajuku. And knowing what you were getting yourself into meant parsing blurry point-and-shoot photos from a DJ’s Myspace page.

Events like Midnight Mess (still running irregularly), Tokyo Dark Castle (also still happening irregularly), and Tokyo Decadence (RIP) were the locus of the scene, where aesthetics met community. In addition to DJs and live bands, events would often include performances of shibari, an artistically expressive form of rope bondage.

For La Carmina, it was like stumbling upon Studio 54 at its peak, in the sense that “[the scene] was so vibrant and so creative and brought in these fascinating creative, edgy people — drag queens, artists, designers, and musicians.”

Editor’s note: Unlike many of us who have been online a long time, and would prefer not to have our earlier musings searchable, La Carmina charitably maintains her archives. Which means you can search out party reports from ’08 and transport yourself back to a unique moment in Tokyo style history.

A different place and time

According to La Carmina, the scene, as it had been, started fading in the ‘10s and especially by 2012. There was the government’s decision to enforce the long-ignored no dancing law, which effectively hollowed out Japan’s underground club scene (it is no longer in effect, but it forever altered multiple scenes). Harajuku’s growing commercialization meant higher rents that were untenable for indie designers. Brands closed.

And of course, styles naturally ebb and flow.

Still, a goth scene does exist today, even if it is smaller and largely decentralized. Irregular parties are still held, though often in somewhat far-flung, less expensive venues. Many brands advertise on Instagram and sell directly to consumers.

The look is different, too: “If you go to LaForet, the basement levels, the style is a bit more casual or a bit more cyber, but it’s still very much gothic. You just don’t see the frilly dresses or the dolly fashions, the parasols, and bonnets of the past. Now it’s a bit sleeker, maybe a bit futuristic, but it’s still really cool,” says La Carmina.

Just recently, veteran goths and first-timers alike ventured out to Sakuradai for the 20th anniversary of Midnight Mess. Meanwhile, newer parties like Casket of Horrors, hosted by drag queen Yukiro Dravarious are contributing a new energy.

For the goth-curious, La Carmina recommends checking out a party for yourself. “They may seem kind of intimidating, because people might be dressed with like white contact lenses, and have a very dark anti-Christ look. But actually, the people there are so friendly.”

Bar Psy, Shinjuku
Tokyo Goths love to gather at this tiny rock bar in Kabukichō, which remains packed with long-haired and leather-jacketed customers until 5 a.m. Bar Psy’s motto is “No Music, No Life” — and lives up to it by blasting alternative and industrial music all night, including rare tracks by bands like Skinny Puppy. Order a dark red “Hell Machine” cocktail, and pick up a t-shirt with an inverted pentagram on it.

Kikirara Shōten, Ota-ku
Indie fashion designer Kiki runs a boutique that feels like a Goth-dolly wonderland. The first floor looks like an antique tea room with coffin-shaped pillows, mounted animal heads, and skull art. Ride the hidden industrial elevator downstairs, and be astonished by her handmade “dark carnival” hats, corsets, bags, and other creative fashions inspired by everything from Art Deco to space disco.

Kera Shop, Shinjuku
The seventh floor of Shinjuku’s Marui Annex is a treasure-trove for those who adore Gothic, Lolita and Punk fashion. Kera Shop has dozens of clothing racks from subculture designers like Moi-meme-Moitie (Mana of Malice Mizer’s label) and Blablahospital (playful nurse-punk). Try on a pentagram harness and platform boots to complete the look.

Recommendations are in La Carmina’s words.

Written by: Rebecca Milner
Filed under: Editorial
Tags:
Sharing
Questions or comments about this article?
Start a thread on our community forum
Ask our local experts about Tokyo