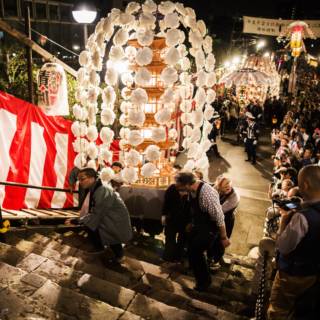 Oeshiki is a Buddhist festival commemorating the anniversary of the death of Nichiren – a revered buddhist teacher who lived during the Kamakura period until about 730 years ago. Although celebrated throughout Japan, the festival held at Ikegami Honmonji Temple is the most notable as it is the place in which Nichiren died.

The highlight of the festival is the mando (10,000 light) rite in which about 3,000 people carry sacred lanterns decorated with cherry blossoms along the approximately two-kilometer route from Ikegami Station to the temple. Some 300,000 people attend the festival each year.

The mando ceremony happens on the 12th and starts from the station and goes to Ikegami Honmonji. It can be very crowded – so turn up early for a good view.