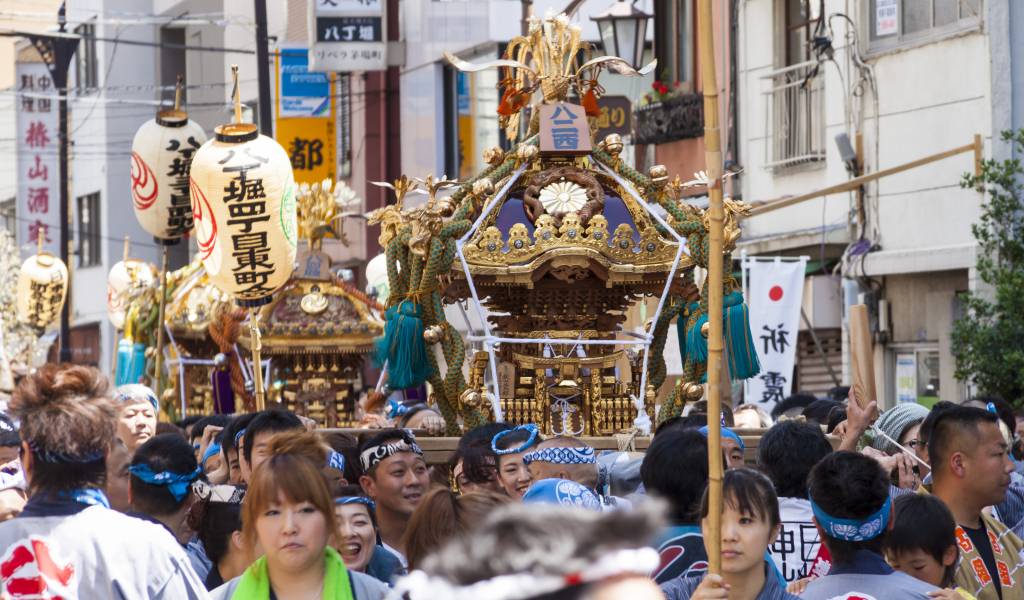 The dates for the festival are the middle of June—usually from the 7th to the 17th. The highlight of the festival is the parade that falls on a weekend in the middle of this period. This year the main parade falls on Friday, June 8th from 7:30am until 4:45pm.

About 300 people dressed in traditional costumes, accompanied by musicians on floats and mikoshi portable shrines, leave Hie Shrine at 8:00am and parade around central Tokyo returning in the evening before 5:00pm. The fact that this is one of the three great Shinto festivals of Japan has more to do with tradition than its size. The modern Sanno Festival is much smaller than it was in the Edo period. The three festivals were among those that the shogun allowed to enter Edo castle’s grounds (a fourth was the Nezu Shrine festival). Edo was Tokyo’s old name and the castle was so large that most of central Tokyo stands on what were once its grounds. A story has it that to stop arguments between the organizers of the Kanda and Sanno festivals, the shogun ordered them to be held on alternate years.

Another reason for the festival’s importance is that between 1871 and 1946 Hie Shrine was one of the top ranked official government shrines in the country. During this period the emperor replaced the shogun as ruler of Japan and was enshrined by state Shinto as a living god. Although American occupation forces disbanded the official shrine ranking system as having contributed to militarism, and the emperor renounced his divinity, the shrine is clearly still held in high esteem. Sanno Matsuri’s parade stops at the imperial palace around midday for the head priest to enter and offer prayers to the imperial family.

Although the Sanno Festival is a shadow of the lively celebration is was in Edo times—an atmosphere you can still witness today at the Sanja Matsuri—the Sanno festival is an insight into the history of Japan and well worth watching.