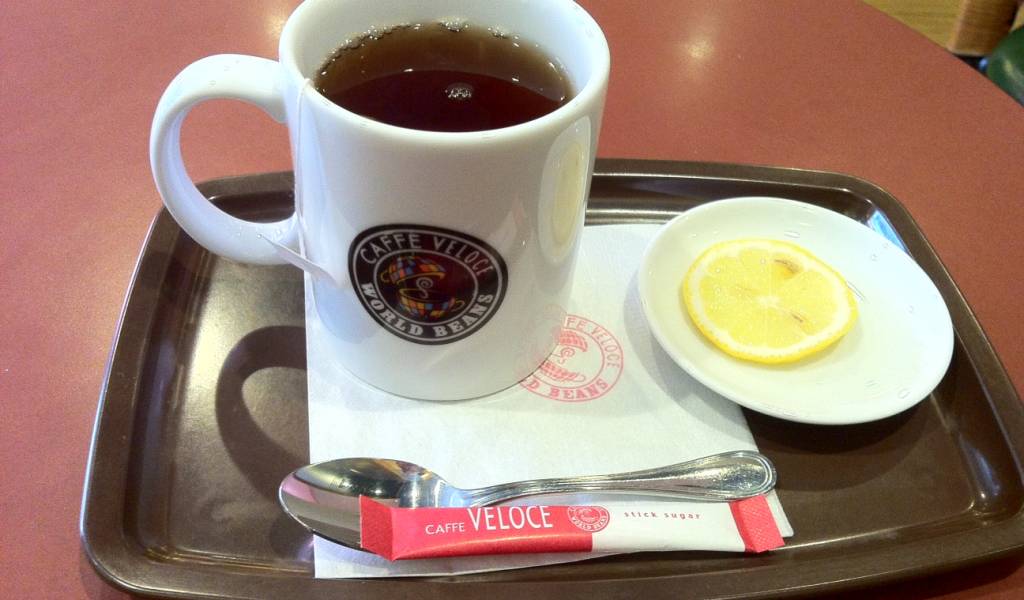 While this might surprise you, cheap doesn’t always equal good. Take, for example, coffee. If it’s dirt cheap, it’s probably going to taste like, well, dirt. Tea, too.  While there’s a ton of the stuff being punted at low prices in Tokyo, not all of it is drinkable.  So step away from that suspicious vending machine, and into Caffé Veloce.

The cheapo sister of the somewhat classier (and less wallet-friendly) Chat Noir brand, Caffé Veloce is a chain of lower-mid-range coffee shops with branches all over the place. Falling somewhere between a Denny’s drink bar and Tully’s on the quality scale, and cheaper than Doutor, Caffé Veloce offers a decent range of teas and coffees, with surprisingly sizeable sandwiches, a few pasta dishes (only at certain branches) and some cakes on the side. If a budget light meal and a cuppa is what you’re after, this is the place to go.

An espresso will set you back 180 yen, a large-size Blend Coffee, 220 yen, and a Café Latte, 230 yen. Being more of a tea fiend, I can’t verify the quality of the coffee, but I haven’t heard horrendous things about it. I can say that the Cocoa Latte (at 280 yen, the most expensive drink on the menu) is one of the best ones I’ve had in Tokyo (much creamier than the cardboard-like stuff I’ve sometimes had to shell out 400 yen for) – and it comes with a cute foam heart – earning it bonus “aw” points.

A mug of Ceylon tea costs between 200-240 yen, and isn’t bad at all. Neither is the Matcha Latte, which is priced at 260 yen. They also have Hoji Tea (roasted green tea), as well as some juices and floats.

Sadly there is no soy milk option for anything – cancelling out the  previously mentioned “aw” points. There is free water though, unlike at certain other coffee shops … and a (properly) separate smoking section.

The sandwiches are thick and tasty (a lot tastier than a convenience store sandwich, anyway), and are reasonable at 200 – 260 yen. You can choose from egg, ham, tuna, potato and salad, bacon omelette and a hot dog type thing for the filling. There’s also a jam sandwich option, which is only 140 yen.

If you roll into one of the branches that serve up pasta, you’ll have a choice of seafood, tomato-meat sauce or a Japanese-style sauce (also meaty), for 480 yen. If it’s authentic Italian food you’re after though, you’re probably better off eating somewhere else.

On the sweet side of things, you can grab a piece of baked cheesecake for 280 yen, a serving of coffee jelly for 290 yen, or a seasonal cake for however much they decide to sell it at. There is also a small range of muffins and sweet bean paste rolls.

If, like me, you’re a picky eater by necessity, you can check their drink allergy chart and food allergy chart online before you go (be warned – they’re in Japanese only).

Do you frequent Caffé Veloce? Think there’s somewhere else we should write about? What are your favourite cheapo coffee and tea spots in Tokyo?